Bay Area activists are laughing about this recent mailing from Bay Area Women in Black, who have joined with "Jewish" Voice for Peace, Al Awda, the Middle east Childrens Alliance, the Arab Resource Organizing center and other anti-Israel groups in planning a disruption of a local Jewish community fair, scheduled for tomorrow.

"This is a reminder that, barring a heavy downpour, BAWiB will join with JVP-Bay Area and other peace-loving people tomorrow, to remind the celebrants at Israel in the Gardens that their party coincides with the end of the 1967 war and the beginning of escalated occupation of Palestine. "

Peace Loving? Bay Area Women in Black is describing groups that have chanted:
“Itbach al Yahud” (slaughter the Jews)
“Falastin balad’na w’al Yahud qalab’na” Palestine is our land and the Jews are our dogs


“ba ruh, ba dam, nafdeek ya Falastin” (with our soul, with our blood, we will cleanse you oh Palestine),
“al mawt al Yahud” (death to the Jews),
“Khaybar Khaybar ya Yahud, jaish-Muhammad saya’ud” (Khaybar Khaybar oh Jews, the army of Muhammad will return).

Peace loving people like these, who cornered 5 pro-Israel activists in San Francisco and attacked them across the police barricade?

Peace loving people like the ones who posted this, along with the home addresses of pro-Israeli activists throughout the Internet, following the mysterious death of Dr. Dan Kliman?

"It was such a shame to hear about that "accidental" (wink wink) demise of Mr. Dan "Slimen" Kliman. Fortunately the peace movement will never have to deal with that piece of trash again. Someone up there (or out there...?) is apparently watching the actions of such people and rendering appropriate justice. That would make me worry if I were doing anything like he did...
;-)"? 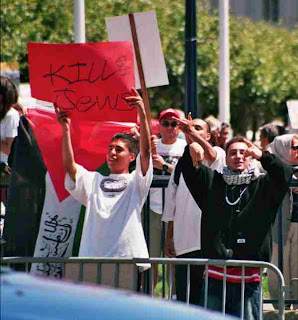 These are videos and Photos from Rallies in the San Francisco bay Area. These were taken at events endorsed by Bay Area Women in Black and "Jewish" Voice for peace. These so called "peace groups" in reality serve as shields and enablers for the the most anti-Semitic Jew-haters in the Bay Area. Tomorrow at Israeli in the Gardens promises to be no exception.
Posted by Dusty at 5:36 PM

Email ThisBlogThis!Share to TwitterShare to FacebookShare to Pinterest
Labels: anti-Semitism in San Francisco, Bay Area Women in Black, Israel in the gardens, Jewish Voice for Peace

oh my these videos bring back such fond memories (sigh). i do so hope the weather holds up tomorrow. i want to make sure all our "friends" show up for tomorrow's festivities.

For many of these folks it's quite simple. Once you have identified yourself as a 'peace-loving person', no amount of evidence that you have surrounded yourself with war-chanting racists will ever shake your serene self-regard for your peace-loving self.

On the video that follows the first on in this post on the YouTube feed, there is a delightful moment where Nasrallah's smilin' mug is juxtaposed with what appears to be a puppet of Gandi, holding the 'be the change quote'. My cup runneth over.

The haters did not disappoint yesterday, chanting "We support the Intifada" and hurling insults at those attending the fair.

Yeah, they kind of failed on the peace-loving part. Also at spelling. General fail.