A Bride for Shalit: Help take down an offensive new Facebook page 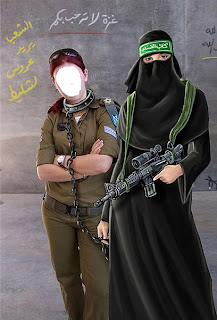 June 25 mark 5 years in captivity for Gilad Shalit. Five years without visitation. Five years without external contact. His family 's grief cannot be fathomed. And now, a new and deeply offensive Facebook page, encouraging the kidnapping of more young Israeli has been created.

From YNET
A new Palestinian Facebook group has been launched in recent days titled "The people want a bride for Shalit."

The intention behind the slogan is clear: A call for the abduction of an Israeli female solider who will serve as yet another Hamas bargaining chip in a future prisoner swap with the Jewish state.

Yet beyond the disturbing message, group organizers resorted to particularly sickening "humor" to further their cause, posting a doctored photograph showing a chained Israeli soldier held by an armed Palestinian woman belonging to Hamas' military wing, Izz al-Din al-Qassam Brigades.

One group member wrote the following message on Facebook: "We need to abduct a soldier who will become a female Shalit, so they get married and bring us a bunch of Shalits."


This deeply offensive page has attracted haters from all sides, and needs to be removed. Please report it to Facebook
http://www.facebook.com/marry.Shalit?sk=wall as a call to violence
Posted by Dusty at 12:02 AM