According to a special announcement from the Israeli Defense Forces, Operation "Outside the Box" destroyed a nuclear reactor in Deir ez-Zur, Syria in September 2007.

While young people across the country are  mobilizing to condemn gun violence, Students for Justice in Palestine Santa Cruz are taking a different route.  This deeply disturbing post advocating for "armed resistance" recently appeared on the  Santa Cruz SJP chapter Facebook page. 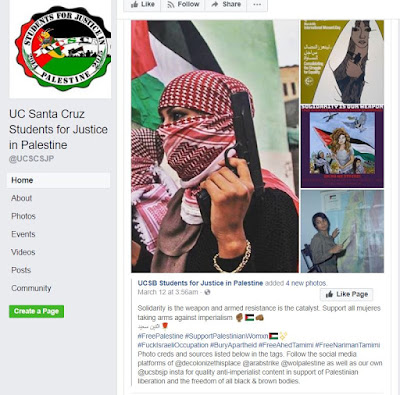 Students for Justice in Palestine is not now, nor have they ever been, a peace group.

UPDATE
The UC Santa Barbara chapter of Students for Justice in Palestine has an identical posting on their Facebook page, indicating at the very least collusion between the campus chapters of the extremist group
Posted by Dusty at 8:01 AM 1 comment:

American Support for Israel at all time high 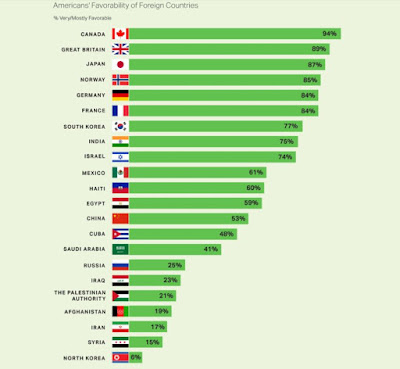 After a decades long campaign of delegitimization and propaganda directed towards Israel, these results are reassuring.  Only 21% of American regard the Palestinian Authority favorable.

From Gallup: Americans remain staunchly in Israel's corner
...Americans' stance on the Israeli-Palestinian conflict is as strongly pro-Israel as at any time in Gallup's three-decade trend. Sixty-four percent say their sympathies in the dispute lie more with the Israelis, tying the high previously recorded in 2013 and 1991. 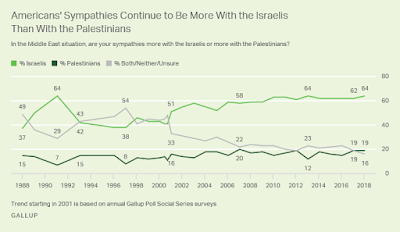 Also reassuring is the decline the percentage in Americans who are undecided or neutral to 16%, the lowest to date. This implies that Americans are learning more about the conflict, and are solidifing their support for Israel.

Results for this Gallup poll are based on telephone interviews conducted in February 2018, with a random sample of 1,044 adults across America, aged 18 and older
Posted by Dusty at 7:58 PM No comments:

Email ThisBlogThis!Share to TwitterShare to FacebookShare to Pinterest
Labels: Galllup poll, US support for Israel

The PFLP is an internationally recognized terror group, responsible for terror attacks across the globe.
From the Global Security website:

Recently,  Palestinian associated with the PLFP terror group murdered 5 Rabbis with meat cleavers and axes as they prayed in Jerusalem on November 18 2014. A sixth victim, a Druze Israeli policeman was also killed.

The logo of the PFLP leaves no doubt of their goal-  the eventual takeover of all of Israel, from the "river to the sea"

Why is GUPS , the General Union of Palestinian Students at taxpayer supported San Francisco State University openly promoting this terrorist organization on their Facebook page? 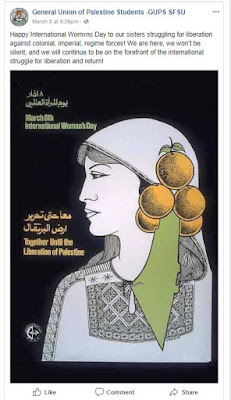 Tikvah, the Zionist Group at UC Berkeley Fundraising for Victims of Syrian War.

According to the Action Group for Palestinians of Syria, as of this week:


Yet the "human rights groups" that claim to care about the Palestinian people are strangely and uncharateristically silent when they can't hold Israel responsible for their suffering.

Real, tangible help instead comes from the last place you'd expect it- from Israel, a nation officially in a state of war with Syria.

For over four years, the Israeli Defence Forces has been helping injured Syrians who cross Israel’s northern border, and has been supplying Syrian civilians with food, fuel and household necessities.

The IDF primarily provides 3 types of assistance as part of Operation Good Neighbor:
1. Medical –  Over 4,000 people have been brought to Israel to receive treatment, including hundreds of children. The IDF also transfers medicine, supplies, and equipment to Syrians across the border. An internationally managed field hospital has also been established at an Israeli outpost near the border.
2. Infrastructure – 450,000 liters of fuel have been transferred for heating, operating water wells, and ovens in bakeries. The IDF also transferred seven generators, water pipes to rebuild Syrian infrastructure, and equipment for a temporary school in the region.
3. Civilian aid – The IDF transferred 40 tons of flour to bakeries, 225 tons of food, 12,000 packages of baby formula, 1,800 packages of diapers, 12 tons of shoes, and 55 tons of cold weather clothing.
UC Berkeley's Tikvah Students for Israel is doing their part as well. On Monday, the Zionist  group will be fundraising  to help support Operation Good Neighbor.  Stop by and help them out.  Their table will be at Sproul Plaza from 11-2. 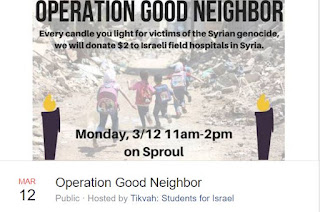 UPDATE:  Rain Date will be Friday, March 16.  See you there!