Gaza Flotilla 2011 Update. The Irish boat to Gaza is Grounded

The Irish boat to Gaza, the 'Saoirse'(Gaelic for freedom) docking in Turkey has been reported sabotaged.  Oh, what a shame.

"The Irish boat has a problem with its propeller, we don't know yet how serious it is, but we believe it may have been sabotaged," said flotilla coordinator Claude Leostic.

And once again, they are blaming Israel.

This is one of a series of setbacks that has plagued the flotlla in recent weeks. On Monday reports emerged  that the propeller on the "Juliano", belonging to Swedish activists, had been cut.

Fewer than 300 "activists" will be taking part in the running of the Gaza blockade – much less than  the 1,500 that had been widely publicized. 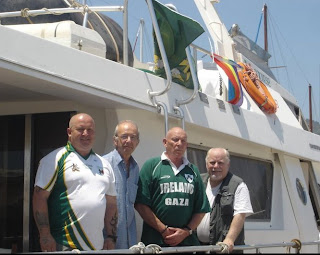 The Irish Boat to Gaza and crew, during happier times
Posted by Dusty at 8:14 PM

And Israel turned me into a newt!!

the same tactics were used in Ulster.Big funds raised through propaganda in the USA to keep the killing machine well oiled.Contacts with leftist dictators maintained, training other murder machines on how to murder the best way etc etc, and all in the name of saorse. Good on you Israel.