The IDF's tongue in cheek message to Iran is going viral on Twitter, with nearly 11,000 likes and thousands of retweets. 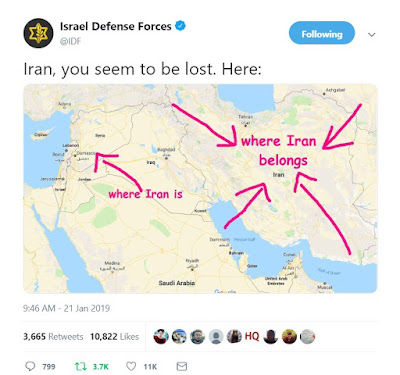 UC Davis has  the ignoble distinction of being on the top ten list of antisemitic universities in America.  Over the years, events put on by Jewish organizations have been disrupted  There has been anti-Semitic graffiti and vandalism on campus. Anti-Semitic flyers  have been distributed on campus. Swastikas were painted on a Jewish fraternity house.

Last year, Jewish student leaders and UC Davis officials met with the intention of improving campus climate for Jewish students  and combating antisemitism. The administration agreed to  host a town hall and a series of workshops with the ADL.

Following outcry from Students for Justice in Palestine, the workshops were never held. An SJP petition , with 149 signatures was presented , with the demand that Jewish Voice for Peace instead conduct the workshops.

From the Daily Aggie

Following the submission of a petition from Students for Justice in Palestine (SJP) against the ADL workshops, however, none of the planned ADL-hosted workshops have presently been scheduled, according to Associate Vice Chancellor Sheri Atkinson.

In early December, Chancellor May mentioned in an interview with The California Aggie the mutually-agreed upon commitments made with Jewish students and administrators.

“We came up with a series of things we were going to do, including a town hall and some training from the ADL to improve the campus climate,” he said at the time. “I think after that meeting, everyone came away feeling like we were in a partnership mode rather than an adversarial mode.”

It is now unclear whether the university plans to follow through on this commitment in the near future.

A recent editorial in the UC Davis student run paper, the Daily Aggie called the University officials out on their failure to satisfactorily address the issue of antisemitism, writing

Well-intentioned groups must also understand that anti-Semitism exists on both the right and the left — in both explicit and implicit forms. Certain leftist groups have historically excluded Jews from liberal spaces because of actual or assumed Zionist ideologies. Anti-Semitism is often wrongly delegitimized. Like any other reprehensible form of discrimination, this form of hatred must be unequivocally and unilaterally condemned and denounced by university and student leaders.
It is undeniable that anti-Semitism is present on campus and in the Davis community. This is not a solitary incident and should not be treated as such. Discrimination in this form requires and deserves both short-term and long-term action. The campus community must know that anti-Semitism of any kind will not be tolerated.

Look no further than Mahmoud Othman’s Gaza café  for the human face of the cruel and inhumane  “siege” of Gaza.

It took a full month for Mahmoud Othman to secure the necessary permits to import hundreds of Garra rufa, better known as  “Dr. Fish”,  for his Gaza spa.

Let that sink in.  A full month.

Its simply inhumane to subject an imprisoned population to a month-long wait for a fish pedicure. It is everyone’s human right to enjoy the life-affirming experience of dipping their feet into tanks full of small flesh eating fish.  Its enshrined by international law. Or in the Universal Declaration of human rights.  Or somewhere.  I’m sure it is. 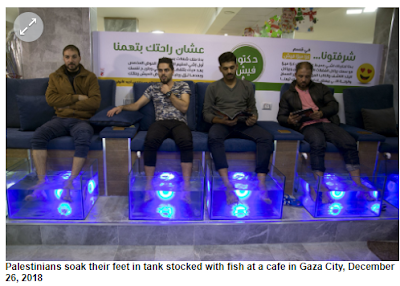 “We wanted to introduce a new idea and service at the cafe,” Othman said. “Doctor fish has remedial and recreational sides.”Among the benefits, he believes the treatment “helps the body get rid of negative energy...”

On a recent evening, seven young men sat in a room lit by blue neon lights, pants rolled to the knee and feet dipped into glass tubs. As the tiny fish clustered around their toes, the customers chatted or touched and swiped their smartphones.  “It’s a beautiful thing,” said Mahmoud al-Dairi, who came for the leisure factor.

Othman says 30 to 40 customers a day pay NIS 30 to offer their bodies as free lunch to the tiny fresh-water fish.

A Tale of Two Restaurants: They go low, we go high.

A tale of 2 restaurants.

Reem’s café and bakery is adorned with a floor to ceiling image of a confessed murderer- Rasmea Odeh,  a convicted terrorist responsible for the deaths of 2 young men in a Jerusalem bombing nearly 20 years ago.   Peaceful vigils by a group of community elders opposed to the glorification of violence were violently attacked by ReemAssil’s staff and patrons.

When the physical attack failed to silence their voices,  the police were repeatedly called to break up the vigils.  Ultimately, Reem Assil attempted to take out restraining orders to quash the communities rights to freedom of assembly and freedom of speech.

Mannys in San Francisco is under protest by alt-left fringe groups, threatening to run him out of town. 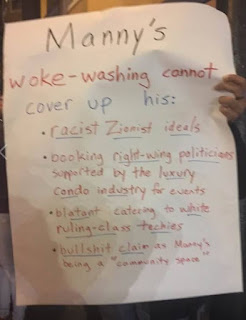 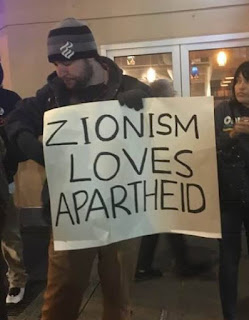 Its not about the artwork Manny has chosen to display- glorious representations of our diverse community.  Its about who Manny is- a proud and  progressive queer Jew who happens to fail the litmus test of political correctness- and accepts the right of the Jewish people to self determination.  Manny’s business has been vandalized with anti-Semitic imagery.  His windows have been broken. 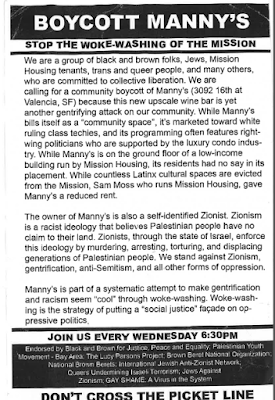 Manny’s response to the protesters harassing his customers was to invite them in to talk.  They refused.  The community response  has also been open and loving. There have not been violent attacks against the protesters, or attempts to silence their voices.   The community instead has embraced Manny, his shop and his mission.  On Wednesday evenings, the day of the protests, Manny’s restaurant has been packed with patrons, celebrating in the community gathering space that Manny has created. .

The community will continue to respond to these attacks with light and with love.
Read more about Manny's:
How many hoops must Manny Yekutiel jump through before he’s deemed worthy to set foot in the Mission?
Manny’s builds a real-life space for civic discourse in SF
Jewish cafe owner in San Francisco hounded over his ‘Zionist ideals’

And in other BDS Fail News

Year 17 of the racist and bigoted BDS campaign has closed. So, hows that boycott going for you?

Lets look at the numbers:

Over 4 million tourists visited Israel in 2018, a 14% increase from the previous year.  This is the second year of record-breaking tourism to Israel.   That number is certain to increase next year, as Israel hosts the 2019 Eurovision Music Contest.

Only in the San Francisco Bay area can a man arrested for leaving a fake bomb on campus, emblazoned with the words  "All Jews F**k off and evaporate"  be arrested and  still not be charged with a hate crime.
Last Friday Michael Fleming, 48, brought a box labeled  "Bomb inside" into the UC Berkeley Police Department. Anti-Semitics symbols and phrases covered the box.  The bomb squad later determined the box did not contain explosives.
Surveillance footage from the campus police department led them to Fleming, who continued his anti-Semitic tirades  during his arrest.
According to Berkeleyside:
Fleming remains in custody at Santa Rita with a bail of $10,000. He is scheduled to enter a plea next week Friday, according to county court records online
Fleming has not been charged with a hate crime.
Posted by Dusty at 6:21 PM No comments:

Email ThisBlogThis!Share to TwitterShare to FacebookShare to Pinterest
Labels: . anti-Semitism on campus, "All Jews F**k off and evaporate", bomb, Michael Fleming, UC berkeley

The Alt- Left eat their young

The protests at Manny's, a social justice cafe in San Francisco's Mission district have been very limited in scope.  In spite of pleas for "solidarity", the group remains a minuscule fringe of bullies with bullhorns showing up at any given time. 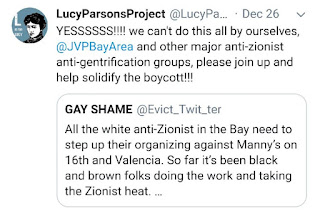 Not only has JVP ignored the request,  their response has been to promote social justice events at Manny's.  Imagine being too extreme even for JVP? 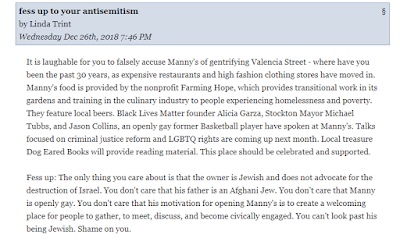 It is laughable for you to falsely accuse Manny's of gentrifying Valencia Street - where have you been the past 30 years, as expensive restaurants and high fashion clothing stores have moved in. Manny's food is provided by the nonprofit Farming Hope, which provides transitional work in its gardens and training in the culinary industry to people experiencing homelessness and poverty. They feature local beers. Black Lives Matter founder Alicia Garza, Stockton Mayor Michael Tubbs, and Jason Collins, an openly gay former Basketball player have spoken at Manny's. Talks focused on criminal justice reform and LGBTQ rights are coming up next month. Local treasure Dog Eared Books will provide reading material. This place should be celebrated and supported. Fess up: The only thing you care about is that the owner is Jewish and does not advocate for the destruction of Israel. You don't care that his father is an Afghani Jew. You don't care that Manny is openly gay. You don't care that his motivation for opening Manny's is to create a welcoming place for people to gather, to meet, discuss, and become civically engaged. You can't look past his being Jewish. Shame on you.

Even in the shadowy Facepage pages where the Israel-haters congregate, the attacks on Manny's are viewed quizzically.  David , who describes Palestine as his  "main political focus"  considers the boycott "FOS" 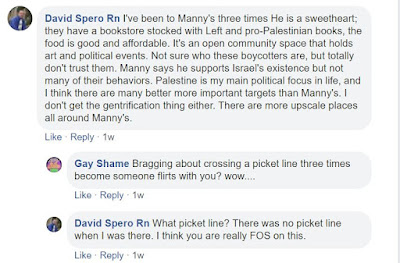 Over at the "Gay Shame" (Yes, really) Facebook page, it is asked   "Can anyone explain to me-because I honestly don't understand- how harrassing the owner of a cafe in San Francisco helps Palestinians......" 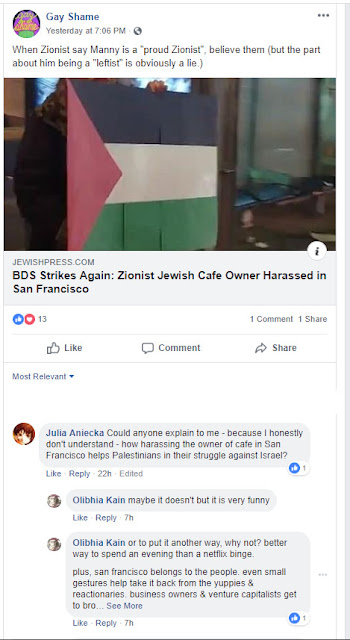 We are all wondering that, too.