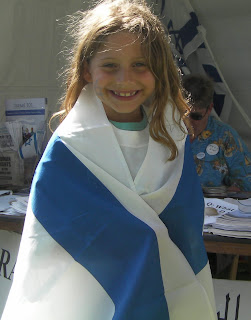 Imagine 20,000 visitors, exhilarating music, yummy food and children dancing in a festival that highlights the Bay area Jewish community. Israel in the Gardens celebrates the diversity and beauty of our unique community, featuring Circus School Acrobats , African Drumming Circle and Dancing, and a day school Rap band. There is a serious side, as well. The festival proudly features "Be a Match"- a bone marrow registry. Chabad is there. Synagogues, day schools and non-profit all have booths. Its this Sunday, June 5, 2011 11:00am - 5:00pm , Yerba Buena Gardens in San Francisco. If you are in the neighborhood, come on by. Even if you aren't in the neighborhood, its worth a special trip. Its that much fun

Faced with such a joyous celebration of communal Jewish life, whats a hater to do? Why, protest it, of course. A tag team of miscreants- Jewish Voice for Peace, Women in Black, Al Awda and the Arab Resource Organizing Center are planning on blocking the entrance and harassing attendees. They do it every year.

Both JVP and Women in Black have consistently refused to take a stand against Palestinian terrorism while they sponsor speakers who call for the destruction of Israel. Both endorse the so called Palestinian "right" of return- the call for the demographic destruction of Israel. Both advocate and endorse the Boycott, Divestment and Sanctions tactic meant to isolate the worlds only Jewish State. Jewish Voice for Peace has turned the temper tantrum into a political statement, repeatedly interupting Jewish Community speakers they disagree with, while whimpering softly "We're the victim".

And once again, the few, the angry and the ugly will try and spoil the day for the rest of the community. But when they put down their signs and sneak into the festival to listen to the music and grab a bite (and they always do!), they'll see what 20,000 Zionists look like. And they'll know just how irrelevant they are. 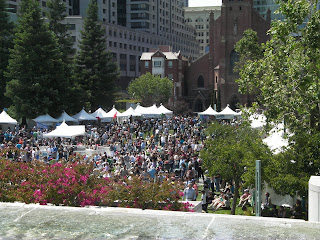 Women inBlack sent out this announcement: June 5, 2011, marks the 44th anniversary of the blah blah blah..... This year, Sunday, June 5, a painful milestone in the Palestinian narrative, is also the chosen date for the celebration called “Israel in the Gardens.” We believe that basing a celebration on death and destruction is criminal and no mere coincidence.

they're gonna learn this weekend that turn about is fair play.

I just received this, via email. People will be fighting back.

"We look forward to seeing many of you at Israel in the Gardens on Sunday. As usual, StandWithUs/SF Voice for Israel will have a booth near the Mission Street entrance. Not only do we have plenty of flyers and brochures that help you support Israel, we also will have some special items available for purchase: Brand new cloth "Buy Israeli Goods" shopping bags (making their world premiere at this event!) and a very special reproduction of one of Israel's newspapers from the day of its independence will be available at our booth.

And, not surprisingly, the anti-Israel haters from groups such as Bay Area Women in Black, Jewish Voice for Peace, al-Awda and the Arab Resource Organizing Center will be protesting outside the Gardens. These groups all refuse to recognize the right of the Jewish people to our own country in our own land, and they will use any types of lies and defamations to poison Israel's image.


As usual, we plan to be present to challenge their slanders. However, we do want to let you know that we have worked out an arrangement with San Francisco Police Department personnel to protect everyone's right to free speech while also protecting the right of people attending the festival to arrive and depart without being required to pass through a gauntlet of hostile protestors.


Those who wish to join us in this effort are of course welcome. We will have flags and signs appropriate for the occasion. However, anyone who is seen to be physically or verbally provoking the other side will be asked to leave-- first by us, and then by the SFPD. (If asked by us, you get to go back into the festival. We cannot guarantee the same if SFPD is involved). Of course, the other side will be required by the SFPD to adhere to the same standards.

There is no point in even trying to speak to members of these hate groups. They are not educable and all it will do is frustrate you.

Last year, inappropriate behavior by one individual on our side was filmed and used by the other side to defame us and to generate donations for their groups. That doesn't help the pro-Israel cause. Our goal is public outreach and to help keep the other side from repeating what they were allowed to do in 2004 at the ballpark-- create an obnoxious environment for those attending the festival.

Meet us by the Mission Street entrance to Yerba Buena Gardens at 11:30, and we will brief you on the details. We look forward to a great celebration of Israel."

Dear Friends,
we all need to support the State of Israel. Israel does have a rigth to exist and figth against terror. The Jewish Voice For Peace, is a Jewish Voice Pro War and pro distraction of the State Of Israel all together with the Women in Black. We need to to stand up for Israel rigth to exist.