Its enough to made a BDS'er drink heavily.

Earlier this week, BDS hole and Electronic Intifada contributor Mieke Zagt posted a photo of an Israeli wine display at the Hema Dutch grocery store on Twitter, claiming the wines were from "occupied Palestinian lands". 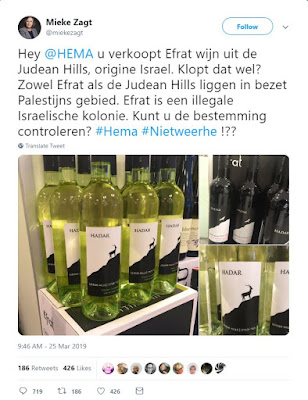 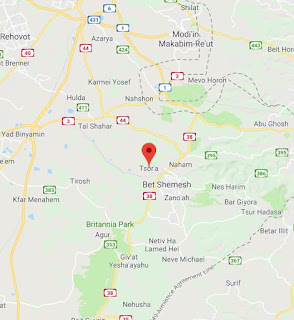 The Efrat Winery is located in Tsor'a, well within the green line.

The reaction to Zagt's post was buycott classic.  People flocked to the stores to buy wine, and filled social media with selfies, using the hashtag  #tipvanmieke 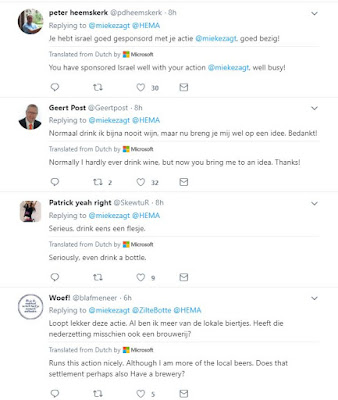 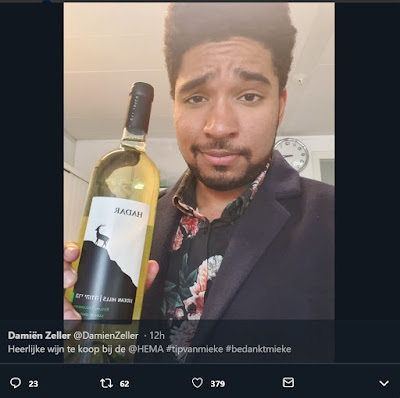 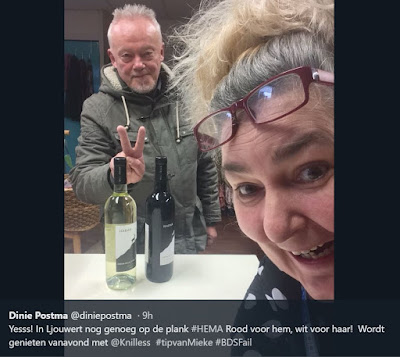 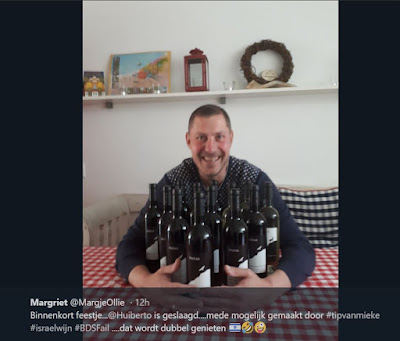 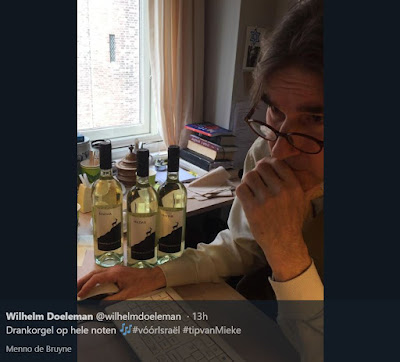 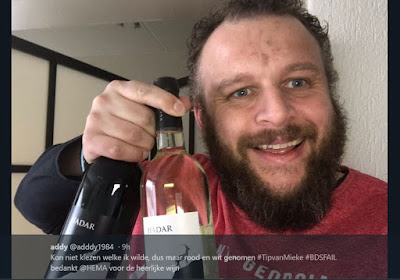 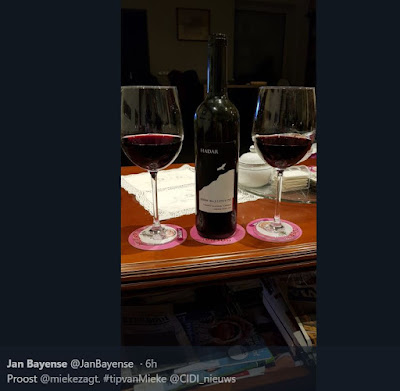 Within hours, #tipvanmieke was trending on Dutch Twitter, and the Hema stores sold out of the wine. 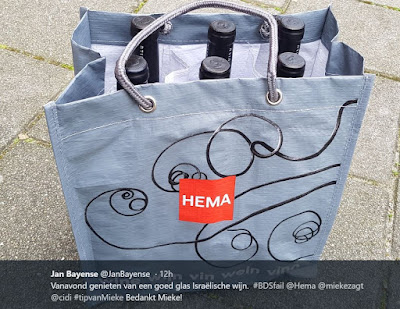 Via the Dutch Paper DeTelegraaf,  and google translate 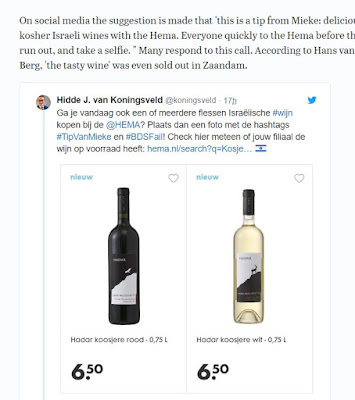 Thats the way you do it.  Buycott Israeli wines and all Israeli products, and spread that BDS fail sunshine, all over the world.

Palestinians celebrated in the streets and passed out candies afer the attack.  Today  a street was named in honor of the murderer in the Palestinian village of Abwein. 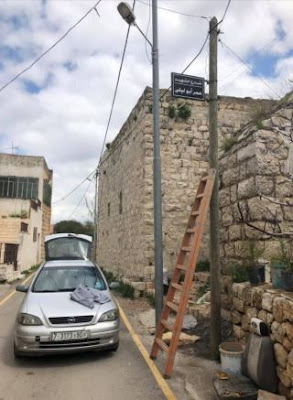 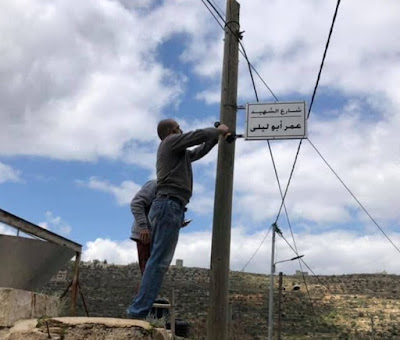 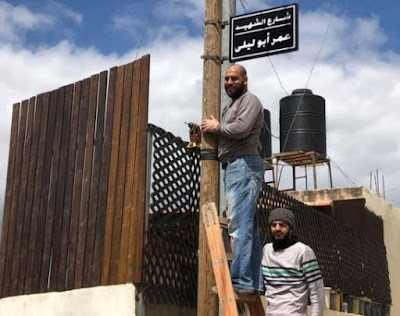 We celebrate life.  They celebrate murder
Posted by Dusty at 6:30 PM No comments:

A rocket fired from Gaza rocket hit a private home in Mishmeret early Monday morning. The home collapsed. Six people inside were reported injured, including 2 children. The 6 month old infant and 3 year old child were taken to the hospital with burns and shrapnel wounds. 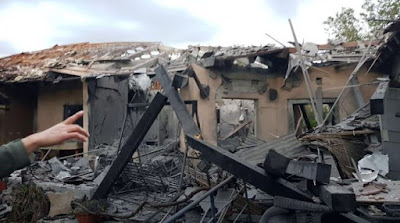 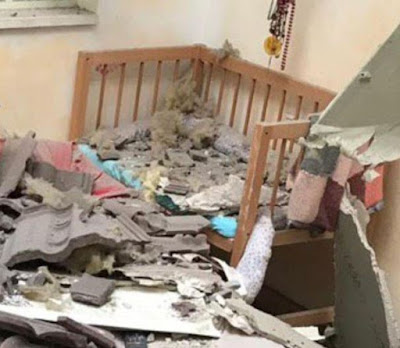 This area is north of Tel Aviv,  and the attack represents a serious escalation of hostilities.

Both Hamas and Islami Jihad  have rockets with the capacity to strike this deep into Israel. Both the J-80, and M-302, a variation of the Syrian-made version have a potential range of 200 kilometres.

Hamas has denied responsibility for the attack, and instead has blamed it on the weather. 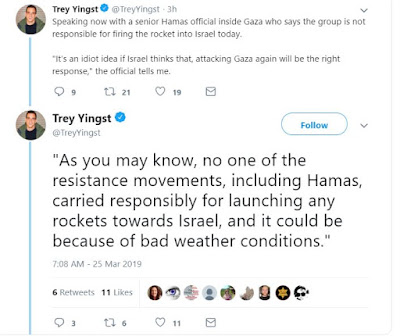 On Thursday, in what might be the most pitiful protest to date, San Francisco State University students attempted to "block" the MUNI tracks at 19th and Holloway, in protest of the recent court decision that determined that Jewish students do in fact, have rights.

Only 3 actual students showed up, so they used string, yes string, to "block the tracks" 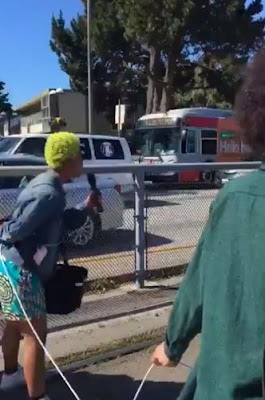 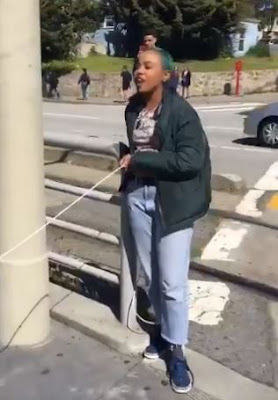 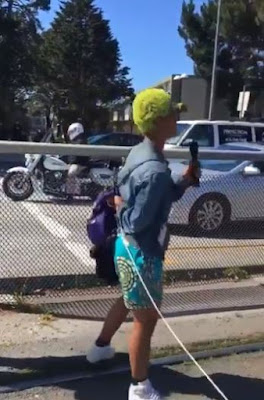 Their chants of  "From the River to the sea" and their string were roundly ignored by passersby. 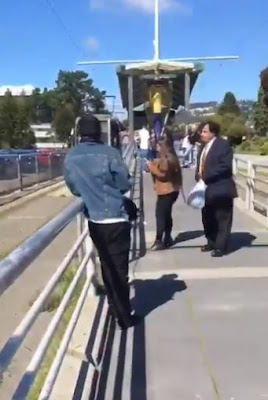 Gaza. Blast from the Past. The more things change...

From a February 1, 1957 article on Gaza, from the Wisconsin Jewish Chronicle, detailing the extraordinary efforts Israel put in to raising the standard of living in Gaza.

"Meanwhile it was revealed that within the next two months work will be begun on linking Gaza farmland into Israel's complex irrigation to bring sufficient water this summer to increase irrigated lands in the Strip by 50 percent.  The Israel Government will subsidize water prices and, as a result, water from the Yarkon River will cost Gaza Arab farmers less than Israeli farmers in the Negev." 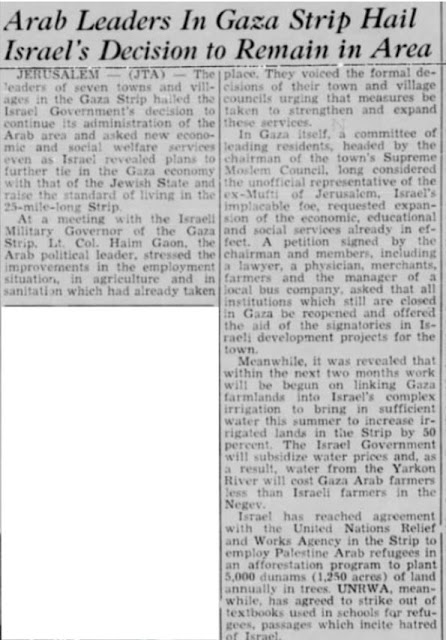 "UNRWA, meanwhile, has agreed to strike out of textbooks, passages which incite hatred of Israel"

Email ThisBlogThis!Share to TwitterShare to FacebookShare to Pinterest
Labels: Blast from the past, Gaza, textbooks, UNRWA, water

The Jewish Virtual Library has a helpful analysis of the history of campus divestment initiatives.  The sky is not falling, and in spite of the usual BDS puffery, there is no indication that "BDS is on a roll". 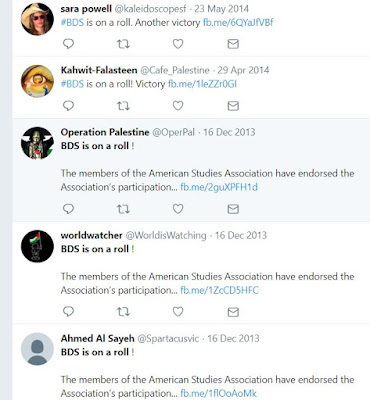 65 % of all resolutions have been defeated.  And 97% percent of American campuses have had no divestment votes and have little or no BDS activity.

*A total of 127 BDS measures have been considered – 83 were defeated (65%).
*Those votes were limited to a total of 68 schools, less than 3% of America’s four-year colleges. (The California Community College Association is counted as one college and the UC Student Association, which has no power and represents no individual schools is excluded as were four graduate student programs).
*A total of 38 schools have approved a BDS resolution in the last 14 years, which represents about 1% of universities.*
*A total of 54 schools have rejected BDS (there is some overlap as some of these have adopted BDS in other years) .
*A total of 28 schools had two or more votes; 9 schools had three or more (Ohio State, Berkeley, Davis, Riverside, UCSB, UCSD, UCSC, Michigan, Dearborn), and 5 schools had four (Michigan, Michigan Dearborn, UC Riverside, UCSD, Ohio State)
*Only 5 schools (Michigan Dearborn, UC San Diego, UC Irvine, UC Riverside, and UC Davis) have passed BDS more than once.
*Of the 68 schools that voted on BDS, 11 were ranked in the top 20 and 11 of 15 (73%) resolutions were defeated.
*A total of 22 schools in the top 50 entertained BDS initiatives and 30 of 46 were defeated (65%). In 2019, Brown became the first Ivy League school to pass a divestment resolution.

Of the schools that voted for divestment, there is no evidence that the resolution was any more than a symbolic act.

Is it a school? 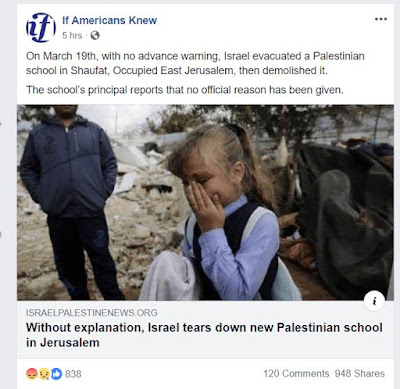 Is it the family home? 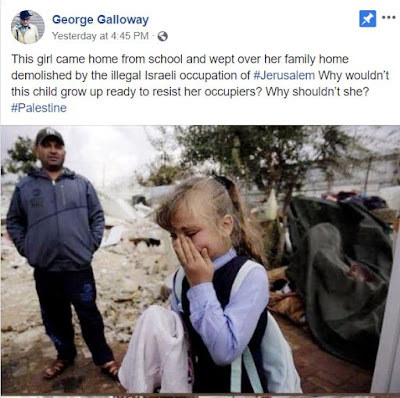 Or is it an audition for the new Shirley Temper, since Ahed Tamimi is getting a bit old for the role?

When it comes to demonizing Israel, truth takes a back seat. 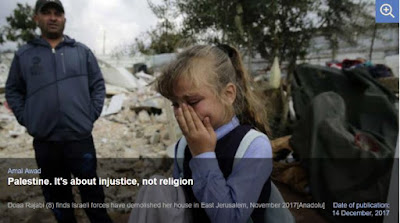 Incidentally, this photo has been in circulation since at least 2017.

Welcome to Pallywood.
Posted by Dusty at 11:18 PM 1 comment:

"California State University’s public recognition that Zionism is an integral part of Jewish identity represents a major victory for Jewish students at SFSU and across the country. "

The case, Volk v. Board of Trustees, involved two San Francisco State University (SFSU) Jewish students, identified as Liam Kern and Charles Volk, alleging that SFSU and the CSU Board of Trustees engaged in anti-Semitism against them when SFSU prevented the campus Hillel from participating in the campus’ “Know Your Rights” fair in February 2017. Kern and Volk also alleged that the university failed to effectively respond to anti-Semitic incidents on campus. These would constitute as violations of California’s Unruh Civil Rights Act, Kern and Volk argued.

The settlement in Volk v. Board of Trustees comes ahead of this month's scheduled trial for a lawsuit brought by two Jewish students who allege that San Francisco State University (SFSU) and the Board of Trustees of CSU discriminated against them.

As part of the settlement, SFSU agreed to:

Public statement: Issue a statement affirming that
"it understands that, for many Jews, Zionism is an important part of their identity";

Independent investigation of additional complaints: "SFSU will, for a period of 24 months, assign all complaints of religious discrimination under either E.O. 1096 or E.O. 1097 to an independent, outside investigator for investigation";

Campus mural: Engage in the SFSU process to allocate "space on the SFSU campus for a mural to be installed under the oversight of the Division of Equity & Community Inclusion, paid for by the University, that will be designed by student groups of differing viewpoints on the issues that are the subject of this litigation to be agreed by the parties (including but not limited to Jewish, pro-Israel, and/or Zionist student groups, should such student groups elect to participate in the process)."

"California State University’s public recognition that Zionism is an integral part of Jewish identity represents a major victory for Jewish students at SFSU and across the country. Today, we have ensured that SFSU will put in place important protections for Jewish and Zionist students to prevent continued discrimination. We are confident that this will change the campus climate for the better," said Brooke Goldstein, Executive Director of The Lawfare Project. "The Lawfare Project was proud to play a role in securing justice for Jewish and Zionist students at SFSU. We commend the student plaintiffs who showed the courage to stand up and advocate for their civil rights."

"We are incredibly happy with this result," said Ross M. Kramer of Winston & Strawn LLP. "Our clients' goal was to bring about meaningful, lasting change at San Francisco State University and throughout the California State University system, and to make sure that the rights of all Jewish students are safeguarded now and into the future. That's what this settlement achieves."

Palestinians passed out candies and sweets in celebration of the murder of an Israeli teen, today.

Earlier today, near Ariel, a Palestinian terrorist assaulted a young soldier with a knife and managed to gain control of his weapon, The gun was then used to shot at passing cars, critically wounding Rabbi Achiad Ettinger, 47. A second vehicle was also hit. The terrorist continued to the nearby Gitai Junction, where he fired upon a group of Israelis waiting at a bus stop, hitting one.

The victim of the initial stabbing and shooting attack has been identified as Sgt. Gal Keidan, 19, from Beersheba.

Palestinians posted photos on social media, openly celebrating the murder of the teen. 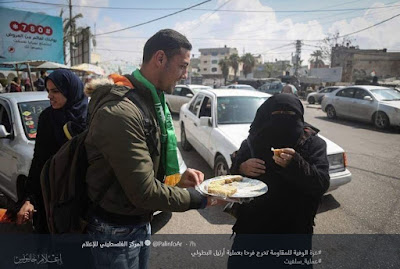 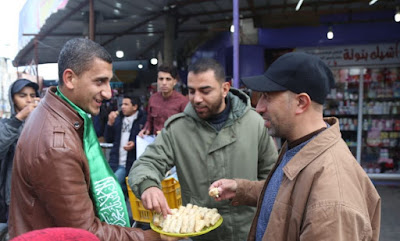 Both Hamas and Islamic Jihad praised the deadly attacks.

The worldwide voices that joined in unity to condemn the terror attack in New Zealand are strangely quiet now.

Hamas attacks on journalists in Gaza

Since the Gaza protests began, Palestinian Journalists' Syndicate (PCJ) has documented 36 violations of journalistic freedom by Hamas security forces, including 17 cases of arrests, 7 cases of beatings, and the seizure of cell phones and press equipment.

Berkeley's Revolution Books, an anachronism in a city known for them, is a clean well lit place for all your Marxist–Leninist–Maoist literary needs. Looking for a book on smashing patriarchy? Got a fetish for Bob Avakian fan fiction? Revolution's your place, ideally located minutes away from the UC Berkeley campus. Its where all the cool bourgeois kids from Cal pay full retail for books on dismantling capitalism.

From the facebook page of Tikvah,  the UC Berkeley Zionist group:

This sign yet again shows us that anti-Semitism is never found far behind anti-Zionism. This kind of anti-Zionist rhetoric from the far left is becoming increasingly prevalent, and it has strong similarities with the false narratives of white supremacists and Islamists. We condemn it completely and urge Revolution Books to remove their signs immediately. 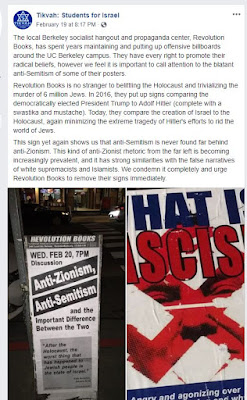 Revolution Books may have had no intention of removing the signs, but community members had other plans.

Check out the hashtag of the people of Gaza, in protest against the genocidal Hamas regime .  "We want to live"  #بدنا_نعيش

Over the last few days, thousands of Gazans in Nusseirat, Rafah, Deir El Balah, Khan Younis and Jabalia have taken to the streets, burning tires and blocking streets in protest of the poor living conditions and high taxes in the Gaza strip.

Hamas has been arresting journalists for reporting or photographing the riots,  but Gazans are leveraging their experience with social media to get the word out.  Hamas security services  have arrested journalist Osama al-Kahlout  in Deir al-Balah because of his coverage of the protests.  Security forces also attacked Jamil Sarhan, director general of the Independent Commission for Human Rights in Deir al-Balah, and Mahmoud al-Louh, a reporter for Sawt al-Shaab.  At least 80 members of Fatah  have been arrested by Hamas.
On Twitter, Hussein al-Sheikh, an aide to PA President Mahmoud Abbas, wrote, “Gaza is rising up in the face of oppressors.”

Videos from the riots show protesters, including children, getting beaten.  Live fire is also used against the crowds.  Hamas-controlled hospitals have not published any statistics on casualties. 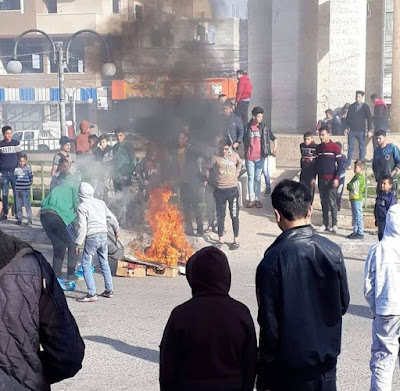