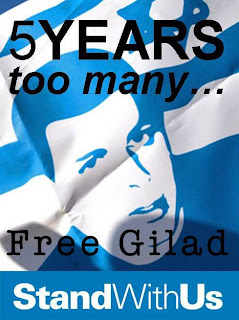 June 25 marks 5 years in captivity for Gilad Shalit. On Thursday, the International Committee of the Red Cross asked the Hmas Government for proof that Shalit was still alive.

The ICRC said Schalit's family had a right under international humanitarian law to be in contact with their 24-year-old son, held incommunicado since his capture on June 25, 2006, and repeated their long-standing request to visit Schalit in custody.

"Because there has been no sign of life from Mr. Schalit for almost two years, the ICRC is now demanding that Hamas prove that he is alive," the Geneva-based International Committee of the Red Cross (ICRC) said.

"Hamas has an obligation under international humanitarian law to protect Mr. Schalit's life, to treat him humanely and to let him have contact with his family," ICRC Director General YvesDaccord said.

Can't help but noticing that not a single "peace activist" on the Gaza Flotilla has asked to visit Shalit. Once again, its not "justice" they pursue- its "Just us".

To assure that Gilad is not forgotten, the Shalit family allowed unprecedented access to documentarian Tal Goren who has created the powerful film: “FAMILY IN CAPTIVITY”.

The film is an intimate story that follows the day to day efforts of the Shalit family to cope and bring Gilad home. Through their story, we exit the political realm and see the human angle of an ordeal that is relate-able to everyone, showing how these private and anonymous individuals rise to become national symbols.

On Wednesday, June 29th at 7:30 PM, the Oshman Family JCC will screen the film in their Schultz Cultural Arts Hall in support of Gilad and his family. Help us keep Gilad in our hearts and in the news! The Israeli Cultural Connection, Jewish National Fund, Kol Emeth Israel Action Committee, Jewish Community Relations Council( JCRC), Jewish Study Network and other community organizations are co-sponsoring this event. FREE. The OFJCC’s address is 3921 Fabian Way in Palo Alto. Contact Ronit Jacobs at.650-223-8692

Here's a quick action you can take to make sure the world knows that we have not forgotten about Gilad. Change your Facebook Profile Photo to the Gilad Shalit icon posted above :

2. Look under the picture for different options and you should see "download".

5. If you put your mouse over your profile picture, you'll see "Change Picture" on the top right corner... Click that!

Palestinians threw eggs at the international Red Cross office in Gaza on Thursday to protest against a call for Hamas to show signs a captured Israeli soldier was still alive.

Dozens of angry protesters also chanted slogans against the International Committee of the Red Cross and ripped down and destroyed the Red Cross sign over the office.

They were protesting over a call earlier on Thursday by the ICRC, demanding that Gaza rulers show proof that Israeli soldier Gilad Shalit, captured five years ago, is still alive.
Posted by Dusty at 8:09 AM