Ah, They're Just Afraid of Getting Their Behinds Kicked, As In 1967 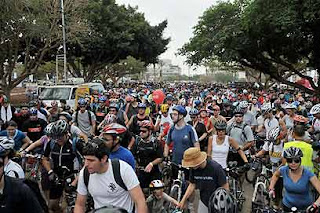 Now, this is not QUITE as drastic as it sounds. My first guess was that if you were an Israeli citizen they were officially banning you from being a Turk. Not quite. It's a bicycle race.

A group of Israeli cyclists was banned last weekend from the 2011 Cycling Tour of Isparta in Turkey, after the Syrian and Iraqi teams threatened to withdraw from the competition.

The Turkish cycling association is organizing this year a series of international tours to promote its cyclists in Europe and win a ticket to the Olympic Games.

Israel participated in the first tour, the Cycling Tour of Turkey, but the Syrian team avoided facing the Israelis and the Iraqi team withdrew after the first stage, after learning of the Israeli participation.

Some people might have said that if Syria and Iraq wanted to take their bikes and go home, it would have been reasonable to let them, rather than ban the team that wanted to compete, and were willing to ride with people of all nations. But that would just be silly.
Posted by BBJ at 12:52 AM