Lies about Israel's Ministry of Health's handling of the Coronovirus are spreading faster than .... well...you know what.

One common trope is that instructions to insure the safety of the populace are only given out in Hebrew.

Gaza prepares for the Coronavirus

In spite of the never-ending hostilities, aid continues to flow into Gaza, from Israel. Just last week, 206 tons of medical supplies and equipment entered Gaza. 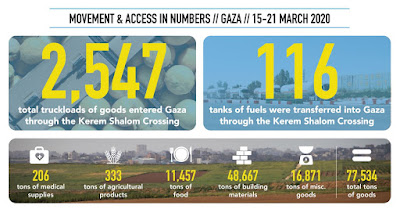 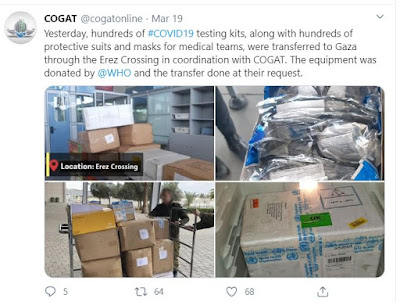 Gaza  has been sanitizing public areas and shopping centers. 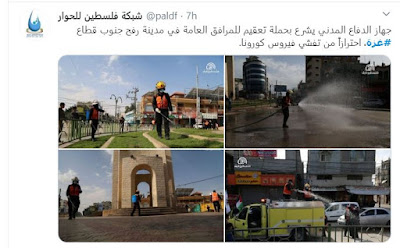 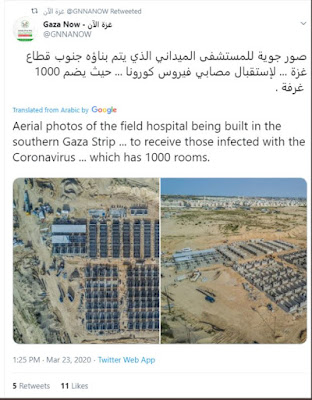 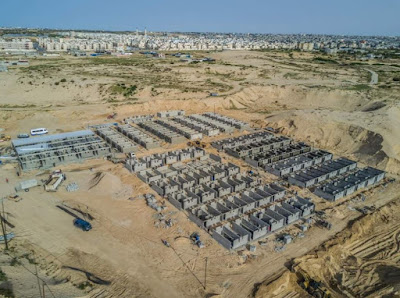 Recognizing that viruses cross borders, Israel and the Palestinian Authority have set up a joint operations room to combat the pandemic.

Rather than applaud the regional cooperation, the usual suspects are taking this as an opportunity to bash Israel. Posting on Twitter, the self-described "journalist, writer, filmmaker" Ben Norton refuses to be inconvenienced by simple reality and instead makes the spurious claim,

"Coronavirus has now reached Gaza, which is under a totally illegal, brutal, medieval-style siege by Israel. Gaza barely has health infrastructure; it has been bombed to pieces by Israel. Every Palestinian death caused by Covid-19 is blood on Israel's hands"

As of today, there are 306,677 confirmed cases of corona virus worldwide.  13,017 have died.  Health care facilities are critically understaffed, with shortages in masks, hand-sanitizer and ventilators in short supply.

And in spite of this,  Gaza has refused to practice social distancing, flaunting their refusal on social media 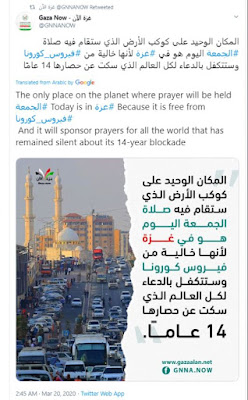 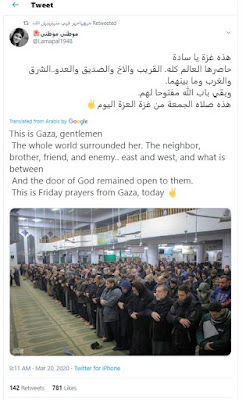 After two Gazans returning from Pakistan tested positive for the coronavirus, the Gaza Health  ministry began to take the pandemic seriously, deciding to close wedding halls, restaurants, cafes and lounges, and to suspend Friday prayers in the Gaza Strip until further notice.  Currently 80 travelers to Gaza are in quarantine.
Posted by Dusty at 5:38 PM 1 comment:

Aida Touma-Sliman from the Arab Joint List has accused the Israel Defense Forces of  committing an “atrocity” by spraying Palestinians “with an unknown substance” , then quickly backtracked.

On Twitter, Joint List MK Aida Touma-Sliman wrote “Another atrocity [being committed] by the occupation under the cover of the coronavirus — the IDF is spraying Palestinians at the Qalqilya checkpoint with an unknown substance. "

After Naftali Bennett corrected her, saying “These are not IDF forces. The Palestinian Authority disinfected the checkpoint,” she deleted her tweet responding, “The video I uploaded a few minutes ago was from the Palestinian side…I was misled.”

Gaza prepares for the coronavirus

The world is preparing for the corona virus pandemic, and "open air prison" Gaza is no exception.

Teams of medical students have visited a local grocery store in the strip, distributing information and answering questions. 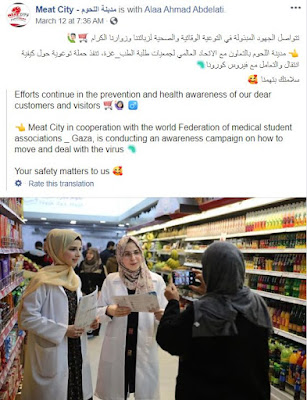 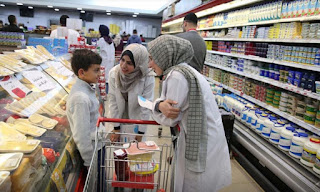 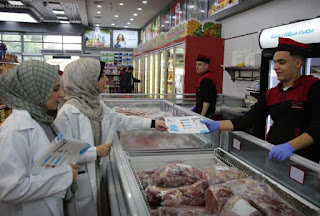 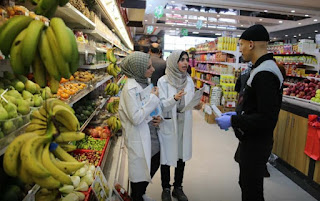 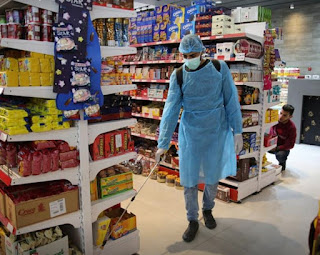 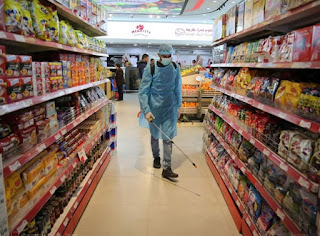 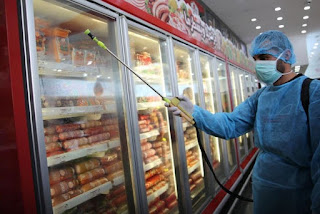 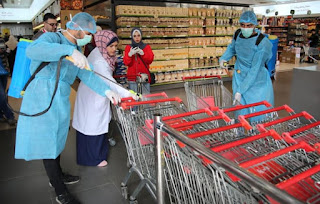 A mini field hospital has been set up close to the Rafah crossing where people entering Gaza from Egypt are checked. Anyone with a fever is tested.  So far, the tests have been negative.

Additionally, Israel has sent 200 kits to identify the Coronavirus to Gaza.  Kamil Abu Rokon, the Coordinator of Government Activities in the Territories (COGAT) declared  "Viruses and diseases have no borders.  COGAT and the Health Ministry will continue their efforts to assist the Palestinian Authority to stop the spread of the coronavirus out of an Israeli interest and humanitarianism"

Remembering the victims of Dalal Mughrabi

On this day in 1978, 42 years ago, Palestinian terrorists including Dalal Mughrabi, carried out the Coastal Road Massacre, killing 39 Israelis including 13 children and wounding 71 others.
On March 11, 1978, twelve members of a Palestinian terrorist cell led by Dalal Mughrabi landed on a beach north of Tel Aviv.  Armed with Kalashnikov rifles, mortars and explosives, they walked to a nearby highway, where they opened fire at passing vehicles before hijacking a bus.
The terrorists shot the passengers on the bus and fired at passing cars.
Among the victims of the terror attack (may their memories be for a blessing):
Revital (Tali) Aharonovitch (14)
Naomi Elichai (18)
Erez Alfred (5)
Yitzhak Alfred (44)
Galit Ankwa  (2)
Yitzhak (Yitzik) Ankwa (10)
Haviv Ankwa (38)
Mathilda (Mathy) Askenazy-Daniel (68)
Yehuda Basterman (32)
Rina Bushkenitch (34)
Dov Bushkenitch (36)
Liat Gal-On (6)
Shim'aon Glotman (43)
Amnon Drori (43)
Naama Hadani (5)
Ilan Hohman  (3)
Roi Hohman  (6)
Rebecca Hohman (28)
Mordechai (Moti) Zit  (9)
Josef Kheloani (66)
Malka Leibovitch-Wiess (58)
Tzyona Lozia-Cohen (32)
Abraham Lozia (37)
Otari Mansurov (37)
Yoav (Yoavi) Meshkel (6)
Tuvia Rozner (53)
Gail Rubin (40)
Meir Segal (73)
Katy (Rina) Sosensky (49)
Joseph Sosensky  (56)
Zvi (Zvika) Eshet  (46)
Omry Tel-Oren (14)
Today, Palestinian textbooks describe Dalal Mughrabi "as a central female role model for Palestinian girls". There are 5 Palestinian schools named after her.  In 2018, a textbook for Palestinian 5th graders devoted an entire chapter to her, writing
"Our Palestinian history is filled with many names of shahids (martyrs) who sacrificed their souls for the homeland, among them is the shahid Dalal Mughrabi, who in her struggle marked one of the images of opposition and bravery, and for that her memory remains forever etched in our hearts and minds,"
Read Palestinian Media Watch for more information on the glorification of terrorist Dalal Mughrabi in the Palestinian territories.
This is considered the deadliest terrorist attack in Israel's history.

From National Geographic: Purim in Tel Aviv is a "must-do" travel event

In Israel’s cosmopolitan seaside city, Tel Aviv Street Party Rave marks the Jewish holiday with live music, dancing in the streets, and food stalls offering up local treats, such as hamantash, a stuffed cookie filled with jam, chocolate, or dates. Crafts and fashion for sale and wildly dressed locals up the party vibe.

From Tourist Israel: The Guide

The annual block party in the streets of Tel Aviv returns for Purim 2020, this time to Charles Clore Park. The city’s biggest Purim party, this year’s event will feature two music stages, stands selling clothes and accessories, seating areas, and food and drinks to buy. This is the place to experience locals and visitors from all walks of life coming together to show off their best Purim costumes. The Purim rave will will take place in Charles Clore Park on March 6 from 12:00-17:00. Entrance is free.

Check local reports for cancellations in the event of inclement weather and/or the coronavirus.
Posted by Dusty at 10:53 PM No comments: 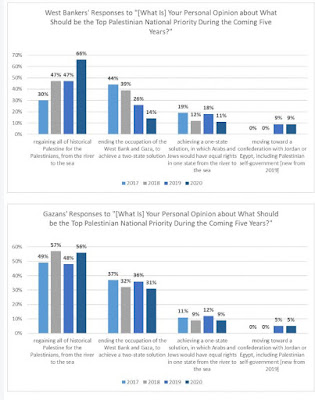 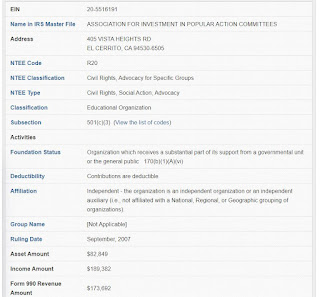 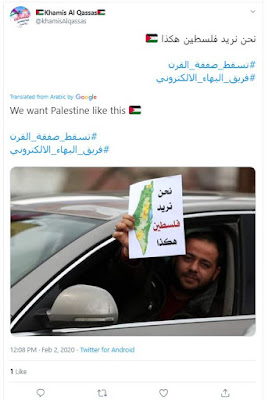 Anti-Semitism at the AIPAC protests

Last week, AIPAC held its annual policy conference in Washington DC, attended by record crowds.  Over 18,000 people attended,  with the goal of strengthening the relationship between Israel and the United States.
This year, as in the previous years, a small group of protesters gathered outside, coordinated by Abbas Hamideh of the extremist Al Awda group.

But the media tells you these are the good guys 🧐pic.twitter.com/3cRjOZrsgD
— Raheem Kassam (@RaheemKassam) March 2, 2020

Waving a Palestinian flag, one of the protesters taunted the crowd attending the conference.
"The Holocaust will come back to you,"
"You're going to get burned if you don't give us the land!" "Hitler will come back!
Burned, all of you!"
The Puerto Rican born Hamideh beamed silently in the background.

Later Abbas himself led chants of "Jerusalem is Arab. Haifa is Arab. Jaffa is Arab".


An additional group including Rich Siegel of "Deir Yassin Remembered” (designated by the Southern Poverty Law Center as a hate group)  took some time to protest the US Holocaust Museum. 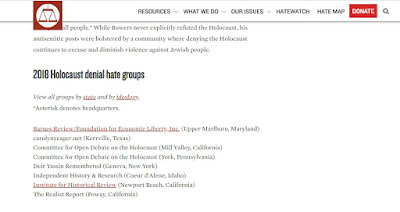 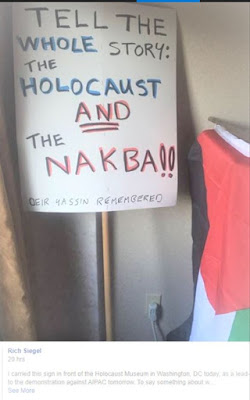 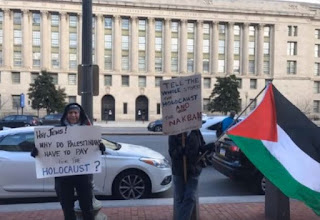 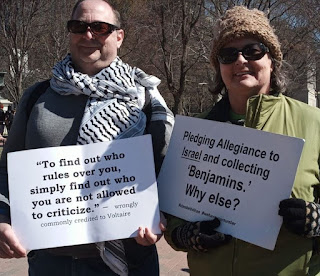 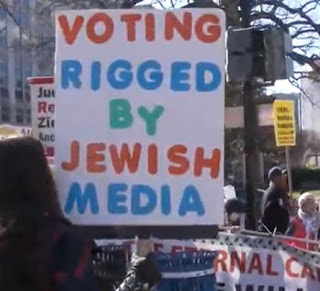 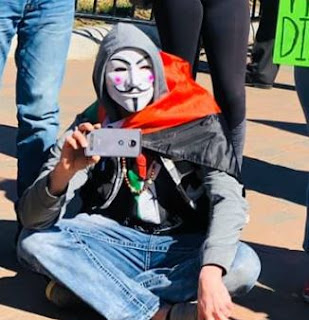 
So yesterday there were pro-Palestinian protesters outside AIPAC saying Hitler should have finished the job, today we have the Westboro Baptist Church (I think) weirdos saying we’ll get divine retribution. pic.twitter.com/YYhk3ht1lx
— Lahav Harkov (@LahavHarkov) March 2, 2020

And while the protests outside screamed for Israel's destruction, it was standing room only at AIPAC in such sessions as “Improving Life in Gaza: Israeli-Palestinian Cooperation” with Professor Tareq Abu Hamed of the  Arava Institute for Environmental Studies, and "Promoting Palestinian Prosperity", with the founder of  Sadara Ventures
Posted by Dusty at 9:55 PM 1 comment: