Israel in the Gardens 2011--Release Your Inner Camel 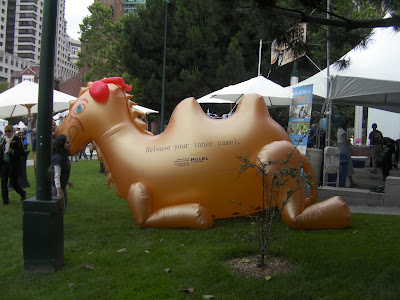 The inflatable camel was with Hillel, and I took a picture of it because it said 'Release your inner camel' on the side of it, and I had never considered having an 'inner camel' before. Also, the camel is a Bactrian. Middle Eastern camels are dromedaries. I discussed this with the Hillel guy, who explained that this was the only inflatable camel on the market. We agreed that it was a Bactrian that had made aliyah.
Welcome to Israel in the Gardens, 2011, a cultural fair featuring Israeli rock, face painting, kids making spice blends, folks selling earrings, and approximately a bazillion people in line for The Flying Felafel. Targeted for hate and protest by Bay Area Women In Black and their peace-loving friends. Let the good times roll! 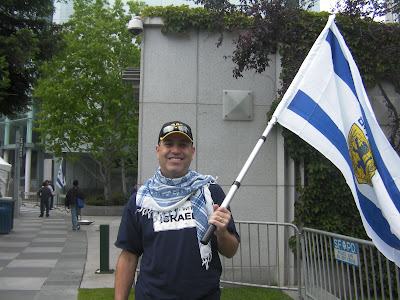 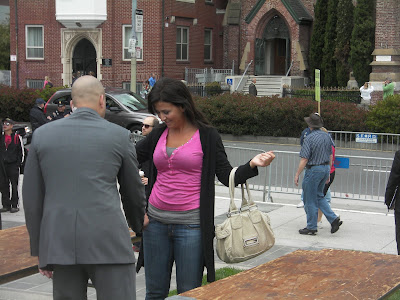 Here is a lady being wanded, prior to entering the event. I've been to a lot of cultural fairs in my day. Let's just say that at the Scottish Games in Santa Rosa they don't wand you and search your bag when you come in. Same way they don't have security guards outside First Methodist on Christmas Day, but they do for Rosh Hashanah services. But I am grateful for our excellent security teams, because while needing them sucks, needing and not having would suck much more.
Anyway, our dance partners began to arrive... 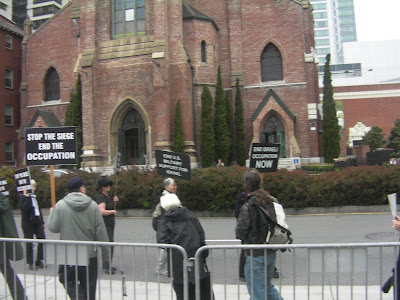 BAWIB is always punctual, dreary, and carrying signs that are correctly spelled, although not always fact-checked. 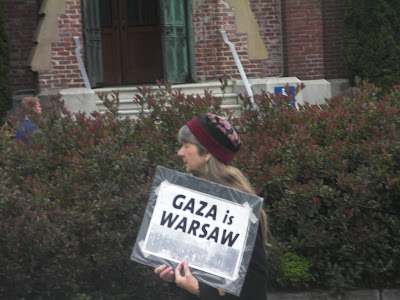 They had great shopping malls in the Warsaw Ghetto, I remember reading about that. Or perhaps what we have here is sheer denial of reality, combined with the pathetic belief that invoking the Holocaust will make the actual situation on the ground irrelevant.
Meanwhile, things were going nicely on the other side of the barricades: 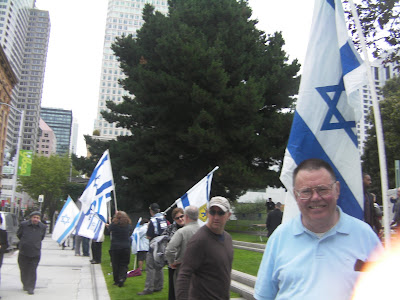 Our waltz with BAWIB was coming to a close. As I've mentioned, BAWIB is quite punctual. If they say noon to one, they show up at noon and leave on the stroke of one. We were not going to be left without dance partners, however. The replacement shift was already getting ready across the plaza, and they were working on...something. 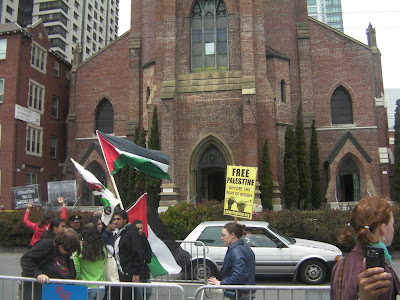 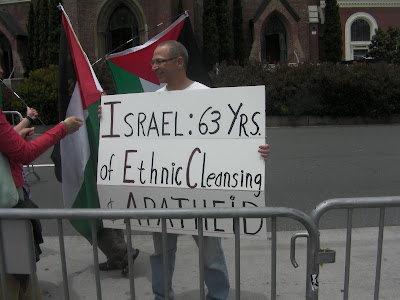 I couldn't get a clear shot of this man's sign, but it reads "Israel: 63 Yrs. of Ethnic Cleansing & APATHEID". The all-caps was important, but apparently the evil West Bank settlers stole the R. 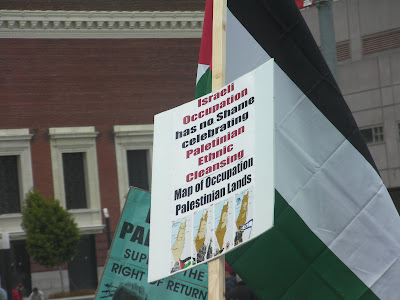 "Paletinian Ethnic Cleansing". What, is spellcheck a Zionist conspiracy? Don't they PROOFREAD these things? (BAWIB may be hateful, but their signs are always spelled correctly.)
Sadly, the third example of spelling issues that I wanted to post did not come out legibly in the photos. The young man below and one of his friends were both wearing jackets with photographs printed on the back, and a heading accusing "Isreal" of horrible crimes. 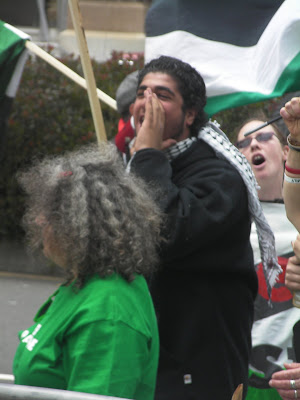 By this time there were quite a lot of people in their little area in the street, yelling and screaming. What were they yelling a screaming? I'm glad you asked. They were yelling and screaming "Intifada, intifada, we support the intifada." They were shouting "Falastin Arabiye!" (Palestine is Arab). They were shrieking "From the river to the sea! From the river to the sea!" And they were screeching "Ba ruh, ba dam, nafdeek ya Falastin." (With spirit and blood we will cleans you, Palestine.) And the old crowd favorite "Khaybar, khaybar ya yahud, jaysh Muhammad saya'ud." (Khaybar, Khaybar, oh Jews, the army of Mohammed will return.) You know. Peaceful slogans like that.

And then the piece de resistance showed up. You will recall the mysterious balloon item mentioned earlier? Well, this is what it looked like fully assembled. 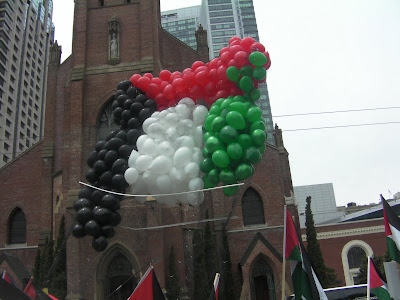 In case you can't tell, I am pretty sure it was supposed to be a Palestinian flag. It didn't turn out perfectly, but heck, who am I to judge? My side didn't have any balloons at all. We were struck into silence by the sheer threatening force of all those balloons. For a couple of seconds. Then the Israeli guys behind me started screaming, "Balloons! Balloons! Ooooh, can I have a balloon? I want a balloon!"

More yelling. Several people gave us the finger. And then, as the SFPD became politely insistent, the group took their balloons and their signs and their whistle and bullhorns and moved across the street, ultimately leaving behind two young men who wanted to act out. They acted out. They chanted. One of them pulled up his sleeves to show us that he had the words "100% Palestinian" tattooed on his forearms.

It was as this point that the most wonderful thing I had seen all day, inflatable camels included, happened. A young woman detatched from the crew across the street, came back, and grabbed one of the young men (the one shown above), and pushed him in the right direction. The other guy wasn't moving, so she wrapped her ams under his, and hoisted him off his feet.

The cheering from our side (also the hooting) was deafening, and for a moment I thought the young woman was going to put him down and come back to the barricades to yell at us, but she gritted her teeth and carted him off, over the center divider, and across the street. 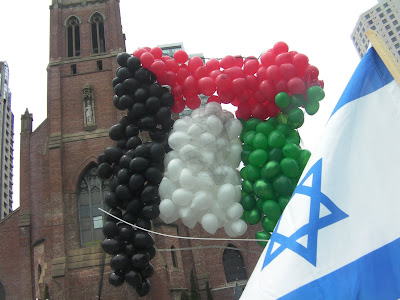 My inner camel felt good about the whole thing.
Posted by BBJ at 1:01 AM

It looks less like a balloon fish from this angle.

And yes, it was indeed wonderful when the youngest jihadi was literally carried away by mom/big sister/babysitter. It couldn't have been more entertaining if she had picked him up by the scruff of his neck, and carried him off between her teeth. And the response of the pro-Israel pro-peace side? A rollicking chorus of "Na na na na, Na na na na, heh, heh, good-bye"

May peace prevail, and may all jihadis get a good spanking ....

The "Gaza is Warsaw" chick is Code pink's own Leslie Angeline. Dumb as a dead fish.

She once participated in a two-hour hunger strike (or was it a late lunch?) in front of the Egyptian consulate in San Francisco.

And people ask me why I won't join Women in Black. Well. It's not because of their spelling.

It's that hate thing. They have a big problem with that.

My Understanding Becky, is that not all Women are Black are Jew hating scum. This group, for example "Oakland Women in Black" http://www.oaklandwomeninblack.org semm committed to equality and justice- and not just for a select few.

Oakland Women In Black is a fine and upstanding group of women. Not haters at all. I understand, though, that they are sometimes met with hostility by people who know the group only through their less savory sisters.