Gaza Flotilla 2011 . Preparations are finalized on all sides

In order to protect Israeli civilians from attacks by the terrorist organization Hamas, the IDF maintains a naval blockade on the Gaza Coast. Given previous attempts by the terrorist organization in smuggling weapons via land and sea and the inherent difficulties in conducting inspections at sea, it is critical that Israeli forces inspect all goods and material marked for Gaza prior to their transfer into the Strip

This week in Athens, Greece, the blockade runners conducted trainings on how to thwart Israeli efforts to enforce the blockade. And the Israel Navy conducted an simulation of all possible scenarios for when the Gaza flotilla attempts to run the naval blockage.

The US State Department warned activists planning to break Israel’s blockade of Gaza that they risked criminal prosecution if they carried through with their attempt.

“Delivering or attempting or conspiring to deliver material support or other resources to or for the benefit of a designated foreign terrorist organization, such as Hamas, could violate US civil and criminal statutes and could lead to fines and incarceration,” State Department spokeswoman Victoria Nuland said in a statement issues as a flotilla prepares to set out from Europe to Gaza, which Hamas runs.

The American Blockade Runners are well aware of this and as a result are simply carrying a cargo of "letters" to be delivered to Gaza. When they aren't trying to provoke an international incident however, our homegrown jihadis and their allies don't even try and conceal their support for Hamas. 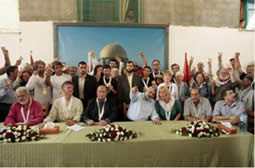 Paul Larudee and friends feted by Hamas leaders in 2009 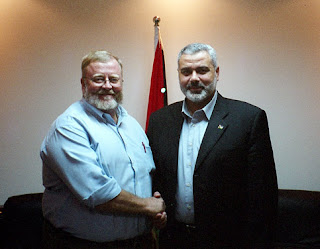 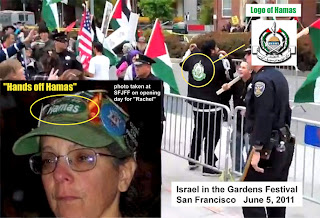 The Americans will be sailing on a Greek owned ship that will be flying an American flag to create a special you-tube moment "Look! The Israelis are attacking an Americans on an American vessel"- don't think for a moment that this entire scenario has not already been planned and orchestrated for maximum impact by the blockade runners.

On Wednesday Greek Foreign Ministry released a statement, saying that flotilla will not help the humanitarian situation. “Greek foreign policy is set by the Greek government, which has in mind the advancement of Greek interests,” “In these moments [the citizens] must show the corresponding responsibility or take full responsibility of their actions.”

That would be a "flying pigs" moment. For the Israel haters, jihad means never taking responsibility for their actions. After all, its all Israel's fault.
Posted by Dusty at 5:57 AM

seeing as your the local al-jazzera media outlet you might be looking at this posting. please take note of the hamas supporters among your fan base (left click on bottom photo to magnify). i know about the planned anti-Israel pro-hamas stuff you guys have coming up. just as your watching us we're watching you. i see from your videos you really like to catch foul mouth pro-Israel supporters for bragging rights on Youtube. but there's a world of difference between between somebody who's a potty mouth in public and one who openly supports the palestinian version of al-qaeda.

I think you'll find that Israel are in breach of over 60 UN resolutions and that this manifests as gross abuse of Palestinian people. This is why the world can muster a flotilla of activists, not because they are Hamas/Jihadis whatever else you want to pigeonhole them as. And I would also like to point out that with the way Israel is introducing both laws and actions against its non-Jewish citizens, it'slooking more andmorelike Palestine is the only democracy in the middle east.

It is incredibly sad and actually most worrisome, that due to complete ignorance of historical facts and of today's realities, or in some cases worse, a purposely brushing aside of these, so many (undoubtedly well meaning folk) are convinced that to follow the 'cause celebre' of demonizing the Jewish State of Israel is the right way forward. Even some Christian denominations have given their full support for this, by following the WCC recomendation to boycott goods emanating from 'illegal Israeli settlements' on the West Bank. In this case the quite flowed Kairos document was adopted as 'the' document of truth.
A question to them: Why is it that by provocative acts such as the flotilla to Gaza, you are gladly willing to support terrorism in its most viscious form?
Hamas and other organizations such as Hezbollah always have been and still are hell bent to destroy the Jewish State of Israel. The thousands of rockets indiscriminately fired into Israel from Gaza are a clear proof of this.
By misguided acts of provocation, resulting in supporting terrorist organizations such as Hamas and adding fuel to an already very biased international press, you will succeed in aiding turbulence and injustice (to Israel and ... to innocent Palestinians!) and most certainly not to a true and lasting peace in the Holy Land.
As a Christian, accepting the word of Almighty God, as written in the Bible, I can only pray that those who wish to set sail on a mission of hate towards God's chosen People, please come to your senses: Get all the facts straight before you will be faced with the harsh and destructive realities of what international terrorists have to offer.

Well, anonymouse, what characteristics of the palestinian govermnment do you consider "democractic" ? Is it one election in 6 years, with no more in sight? Is it the routine torture of dissidents? Is it the murder of minority groups? Is it subjugation of women? Is it the death penalty imposed if you are caught selling land to a Jew?

How, anonymouse is the Palestinian government "democractic"?

Set your political affiliations aside if you can and consider that the people of Gaza are being denied basic human rights. Instead of getting so caught up in who did what to who and who did it first, open your eyes to the great sadness of this shameful display of humanity exhibited by both sides. This propoganda is appalling, and only incites violence. Of course Israel be sure to immediately pin it on anyone but itself. Sickening.

The people of Gaza are being denied basic human rights by their own government.