"Be on Our Side. Because We're Pretty Sure You'll fall for anything"

Great column at Divest this about the use of pathos- emotional manipulation- in the anti-Israel camp.

"A large part of the BDS project is built around ensuring that wherever you go in life, and whatever you do, the Arab-Israeli conflict is in your face.

If you walk through a busy square in Cambridge or Boston or San Francisco at rush hour, at some point you’re sure to see a group of wrinkly Israel haters passing out photos of broken Palestinian children which (via a syllogism known only to the BDSers) means you should stop buying hummus made in Massachusetts or New Jersey.

If you shop at a department store during the holiday season, you stand a chance of seeing some even more deranged “activists” stripping to their underwear and smearing themselves with Ahava skin-cream products in public.

Point of fact, these particular antics are not nearly as ubiquitous as the Facebook pages of the boycotters would have you believe (which is why I continue to suspect that such theatre is largely for the benefit of the BDSers themselves). And if flash mobs at phone stores or catcalls at Israeli ballet performances are meant to sway public opinion, the twenty point jump in support for Israel during the BDS era seems to indicate it is counter-productive to the cause.

But neither reality nor the principles of cause leading to effect will ever budge this lot from their program, and when it comes to finding new innovative ways to annoy the public, this is one area where Israel’s foes never lack creativity (or chutzpah).

Earlier this year, they seem to have hit on a breakthrough: bus and subway ads. Unlike flash mobs, rallies and riots, after all, placing an ad on the side of a bus that shows those aforementioned photos of maimed children (with a tagline laying all blame on you-know-who) just requires writing a couple of checks (no great challenge to a “movement” that seems to have the resources to purchase ships and sail them across the Mediterranean).

The trouble is, the sale of bus ads is not limited to just one set of political opinion holders. And when the boycotters tried this stunt out in Seattle, it first elicited loud protests, and finally a threat to run equally ugly photos of victims of Palestinian terror in a parallel campaign. This led the public transport authorities to decide that, all things being equal, they’d prefer to not be the vehicle to subject the public to endless accusations alongside pictures of charred corpses.

As that battle continues (through the courts, naturally, given BDSers inability to take “No” for an answer), the innovation of the public transport ad inspired others to try out this tactic, albeit with a more subtle campaign; to wit:" 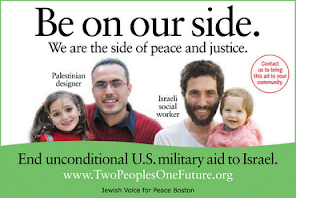 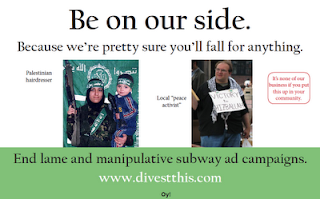 Hmmmm. I have a feeling you'll be seeing these new improved ads around the Bay area, very very soon.
Posted by Dusty at 11:00 AM

Email ThisBlogThis!Share to TwitterShare to FacebookShare to Pinterest
Labels: Be on our side, Divest this, Subway bus ads, Two people one future