The co-founder of the International Solidarity Movement (ISM) Huwaida Arraf's most recent press release keeps with the overall theme of the Palestinian "resistance" movement "Even when we lose we win." and its corollary "Even when we win, we're still the victims"

Israel’s announcement of authorization for construction materials for 1,200 homes and 18 schools in Gaza is the latest achievement by the Freedom Flotilla, scheduled to sail next week.


In the weeks leading up to the flotilla, Israel has taken a number of steps to try to address the concerns raised in the public eye by the Freedom Flotilla 2 – Stay Human initiative. However organizers say that these steps are symbolic at best, fall far short of Israel’s obligations under international law, are insufficient to meet the needs of Palestinians in Gaza, and are fundamentally designed to maintain the occupation and system of control that Israel exerts over Palestinian lives. Ultimately, these measures fall short of the greatest test – that of freedom for Palestinians.

In addition to the authorization of a limited amount of construction materials, Israel has also recently permitted 19 trucks of medicine to be delivered by Palestinian sources from the West Bank to Gaza. This was in response to an emergency announcement from health authorities in Gaza that crucial medicines had run out due to Israel's illegal blockade. Prior to that, Israel increased the number of aid trucks entering Gaza to between 210 and 220 per day. However, this still falls 35% short of what is required by Gaza Strip residents.

The last week in May, 8 truckloads of Medicine and Medical Equipment entered Gaza from Israel. Israel does not limit the shipment of medicine and medical supplies at all. Have you read the reports that Hamas is stockpiling medicine, and diverting the medicines away from hospitals and towards Hamas-affiliated pharmacies, where hospital patients' families are forced to buy medicine not available in hospitals. Hamas is always willing to sacrifice the health and well being of the Gaza populace if it will ensure a propaganda victory against Israel.

The pattern developing shows that as the sailing date of the Flotilla nears, Israel is increasing efforts to allow humanitarian goods into Gaza, including previously banned reconstruction materials. This proves three important things: (1) the Flotilla is effective in generating changes, even if they are insufficient, on the ground; (2) the ‘normal channels’ for delivering aid exist, but are useless without pressure on Israel to allow them to function; and (3) Israel’s standard excuse for preventing reconstruction material into Gaza is rendered baseless, given the approval to allow 1,200 homes and 18 schools to be constructed. 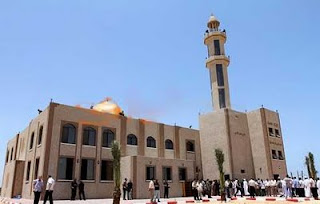 Even as the Freedom Flotilla welcomes this latest achievement and proof of the necessity and effectiveness of the Flotilla tactic, we also reiterate that our effort is not simply about delivering humanitarian aid. The goal of the Flotilla is not aid; it is freedom for Palestinians in Gaza and the rest of the occupied Palestinian territories. As such, there are no ‘established channels’ for freedom – there is only one - an end to the Israeli occupation.

There is no occupation of Gaza, Huwaida. There is one Jew left in Gaza, and his name is Gilad Shalit. He is being held against his will, in direct violation of the Geneva convention. He has been deprived of his human and civil rights for nearly 5 years.
Posted by Dusty at 3:08 PM