An intitiative organized by the Arab Resource Organizing Center (AROC), is using the cover of real and imagined LGBT groups to picket San Francisco's LGBT film festival for daring to show an Israel film, claiming "The Consulate and its supporters have threatened to brand the festival as "anti-Jewish" if they decline their money."

Where? When? If this were true, they'd be able to provide evidence, but no, this statement was completely fabricated.

The "Queen has no Crown" , a film by Tomer Heymann explores the life of a Jewish family in Israel, and their personal struggle with identity, and belonging. The family drama is framed within the larger focus of societal drama - the Israeli-Palestinian conflict, its secular and religious citizens, and the overall struggle for human rights. This acclaimed and sensitive film is only controversial because the Israeli consulate has given Frameline a grant to bring director Tomer Heymann to the Bay area to discuss his film.

AROC (Have they ever donated money to Frameline? Have they ever sponsored an Arab film maker to speak at the festival?) have sent out multiple announcements urging the community the pressure Frameline . Their latest announcement promotes a picket of opening night:

The San Francisco International LGBT Film Festival has accepted sponsorship and money from the Israeli consulate for the second year in a row. Every Palestinian queer organization in the world, along with a number of local and international queer groups, have demanded that the festival presenter, Frameline, stand up for human rights and international law by refusing to partner with the Israeli government. But by accepting it, and ignoring the voices and the lives of Palestinian queers, Frameline has shown itself to be anti-queer.

AROC's campaign to delegitimize the State of Israel considers any reference to Israel's excellent record in regard to gay and lesbian rights as 'pinkwashing'.

Please join StandWithUs/San Francisco Voice for Israel, GLAZE (Gays and Lesbians Advocating for the Zionist Entity) and other LGBT community organizations in countering the AROC protest at Frameline. If "all queers count", AROC- stop trying to silence OUR voices.


UPDATE
Photos from Frameline Protest, June 17. Thanks to R for sending them our way! 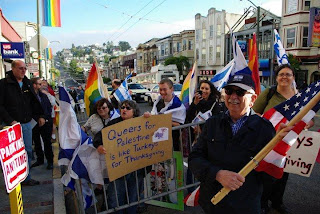 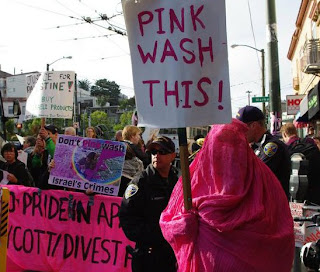 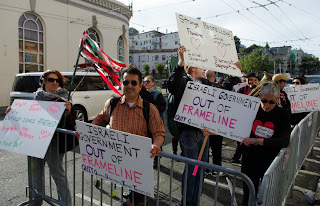 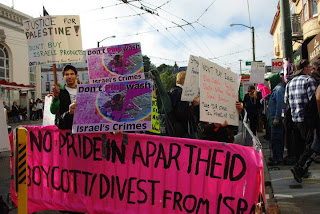