San Francisco's Mayor Ed Lee wants to help its sister city Haifa get back on her feet following the devastating fires. He just tweeted

" #SF is proud to be Haifa's Sister City & we encourage you to support the recovery efforts from the fires. Donate now at sfgivesback.org"

The donations are channeled through the venerable Jewish National Fund (JNF)
The Jewish Community Relations Council (JCRC) has more info:

Anti-Israel sites are anxious to pass responsibility for the current rash of fires in Israel back to the Jews. What better way to reclaim the mantle of eternal victimhood  than blaming the  Jewish National fund for planting pine trees during Israel's formative years, instead of, oh, lets say, this guy: 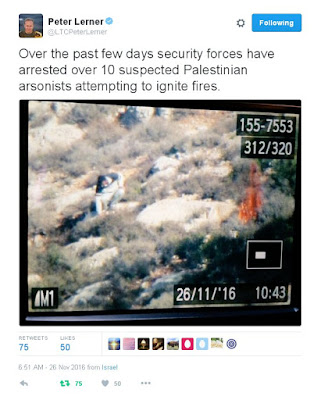 The pine tree that the JNF has been planting for so many years is the Aleppo pine, pinus halepensis (known in Israel as the Jerusalem pine.)  It is found throughout the Mediterranean, from Morocco to Syria. The JNF did not choose the tree to make Israel look like Europe, a lie repeated by Mondoweiss.  Native Aleppo pine forests exist in the Carmel and Galilee regions.

Moreover, pine trees were observed in Palestine by travelers in the 19th century. From The Popular Cyclopædia of Biblical Literature, 1856:

The tall cypress only exists in Palestine, as cultivated by man in gardens, and in cemeteries, and other open places of towns. But as the spontaneous growth of the country, we find upon the heights and swelling hills, the walnut-tree, the strawberry-tree, the laurel-tree, &c.; while on the formerly wooded heights, various kinds of pine-trees, large and small, still maintain their ground.

As far as Mount Carmel is concerned specifically,  the Jewish Encyclopedia of 1907 says it is "covered with helm-oaks and pine trees."

UPDATE:
Mazin Qumsiyeh writing on behalf of the  Palestine Museum of Natural History and the Palestine Institute of Biodiversity and Sustainability continues the "pine libel" stating:

The choice of European pine trees was because a) they grow fast, b) they give a European look to the otherwise “Arab” landscape, c) their leaves on the ground make  acidic preventing growth or regrowth of endogenous trees.

In total KKL boasts that it planted 240 million pine trees. Resinous pine is like petrol and burns with a ferocity.

Read about the local pines mentioned in the Bible here

Three pines are frequently encountered in the Middle East. One, Pinus pinea, the stone pine or umbrella pine (in allusion to its umbrella-like appearance when mature), was once grown on a large scale for its seeds which are an important ingredient in Middle East foods. Today, most of these seeds are imported from China and may be produced by trees other than the stone pine. All pines have edible seeds, most, however, are too small to harvest.

The two native pines are Aleppo pine, P. halepensis, and P. brutia which has no widely acceptable common name. Pinus brutia is widespread in Syria and Turkey. There are remnant forests of Aleppo pine in Israel and Jordan. Both pines are fire maintained in nature.

In Nehemiah 8:15 and Isaiah 41:19 the Aleppo pine brutia pine is probably meant. In each of these three references the beauty of the trees is emphasized. This is applicable as the pine is evergreen, fragrant, but also produces good wood for construction and furniture.

In Hosea 14:8 reference is made to a pine tree which apparently produces an edible fruit perhaps the stone pine. It is often difficult to say with certainty which pine is intended in the scriptures as the same word can be used for other evergreen trees such as the cypress and the fir.

Heavy winds and dry conditions are driving wildfires across Israel. Some of them are suspected to be the result of arson. Israel is struggling to save property and save lives, and is planning on asking for firefighting assistance from Greece, Croatia, Cyprus. 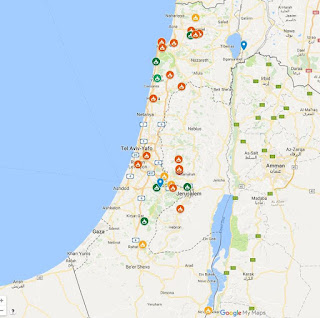 In the meanwhile, trending first in the world under the Arabic hashtag is  اسراييل_تحترق  (Israel burns). 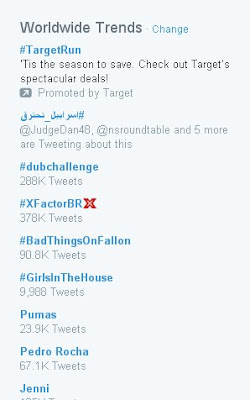 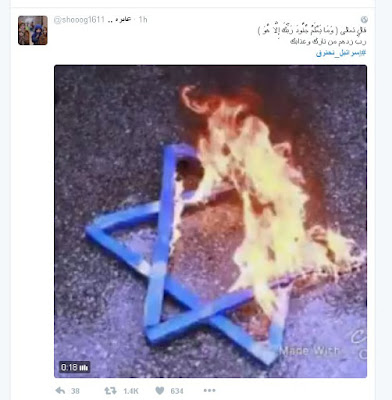 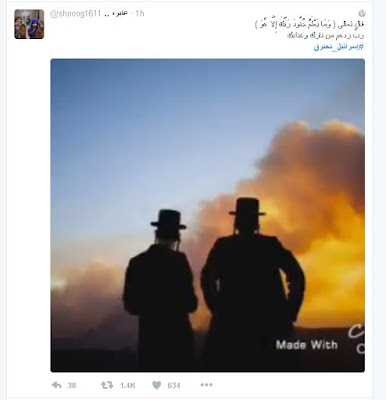 Its celebratory.
For a land they claim is holy to their people, the Arabs of the world are thrilled to see the devastation. There isn't a moments thought about the million Arabs living in Israel, or to the potential ecological devastation to the region.
Hate lit the match, and hate continues to fan the flames.

Thanks to the algorithms of ranked choice voting, Cheryl Davila has won a seat on the Berkeley City Council by 34 votes.

Cheryl's been a regular at local anti-Israel functions in the Bay area. 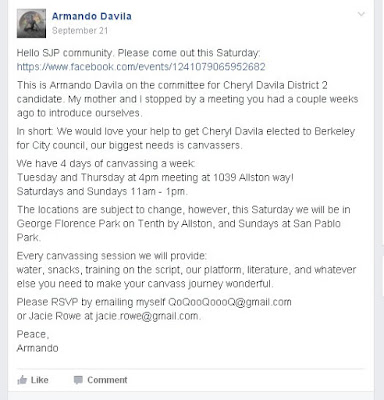 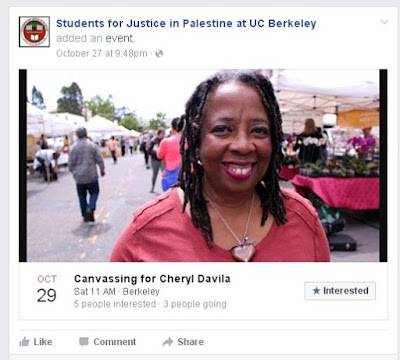 Her contributors read like a who's who of anti-Israel activists. Hatem Bazian. Hassan and Margaret Fouda. JVP's Andrew Gutierrez,  Cindy Shamban and Glen Hauer. Barbara Lubin of the Middle East Children's Alliance. Donald Wagner from Fiends of Sabeel.  The entire Ezzeddine family.  The Zayour family. Anti-Israel activists from as far away as Texas and New York have contributed to her campaign.

Cheryl Davila knows this support didn't come cheap.Faced with the sky-rocketing cost of housing, homelessness, and parking shortages, the last thing Berkeley should need to worry about is establishing its own foreign policy.  Nevertheless, expect her to introduce a Berkeley Divestment from Israel resolution into the City Council next year.

As of November 14 the votes have not yet been certified, but Davila remains in the lead.

California and Israel: working together to defeat climate change

The memorandum of understanding signed in 2014 by Benjamin Netanyahu and California Governor Jerry Brown has led to some ground breaking collaborations.

Over the summer, a delegation of 18 California policymakers traveled to Israel  to explore issues related to climate change, water use and smart agriculture.  Their  travels included a tour of a water management facility in Jerusalem, plant breeding company Kaiima Ltdin Moshav Sharon (listed by MIT as one of its top-50 smartest companies.) a visit to a nursery near Gaza,  a trip to Netafim, an Israeli Ag technology company in the Negev Desert, and a visit to the  Ben Gurion University Desert Research Institute. They meet with agricultural innovation, climate change and water use experts across Israel

Karen Ross at the California Department of Food and Agriculture blog, Planting Seeds wrote of her trip "The sense of history here leaves me in a state of awe"

Read her reports at Planting Seeds

Climate Smart Israel – to Jerusalem and the Sea of Galilee

Climate Smart Israel – a visit to the ‘Financial Innovations Lab’

Webinar: The Extent, Development and Potential of Recycled Water Use for Specialty Crop Production.

Can California learn to quench its thirst and feed its hungry from a tiny nation in the Middle East? Its happening already.
Posted by Dusty at 5:31 PM 1 comment:

Rest in Power. A hero of Zion: Sylvia Siegel z'l

And now, it is time to praise a hero of Zion: Sylvia Siegel z'l, otherwise known as Thyme (Zipporah) Siegel. She died and was buried yesterday. Thyme was once a feminist separatist leftist "living on the land" (think of this as a misguided feminist kibbutz experiment) in Oregon when one fine day, she visited Israel. Everything changed for her.

She also flew from far-off California to meet with me. Her questions were simple.

"Phyllis, where am I? What's happening? What must I do? All my friends have, overnight, become my enemies. All my political comrades spit on me. Literally. And they are so wrong yet they think they alone have the truth."

"Welcome to the Resistance," I told her and sent her on her Mission.

Thyme did not fail me or the moment. Thyme would stand at Berkeley's Sproul Plaza,  (!) holding an Israeli flag, just waiting for anyone to mess with her. And mess with her they did. She kept holding that flag. Thyme also became one of the best undercover journalists, working with bylined journalists. She would go into the BDS or Israel Apartheid Week planning meeting, blend in, take notes, reveal what took place to distinguished journalists, who would publish what was said and planned.

When I was asked to be part of a "Feminism and Anti-Semitism" panel by Jennifer Roskies--it took place at Yale at the very best conference on anti-Semitism in the 21st century, under the aegis of Dr. Charles Small--I immediately suggested that Thyme join us. And so she did, together with Nora Gold, whose novel, Field of Exile, memorialized the various "intifadas" on Canadian campuses.

One of Israel's counter-terrorism experts came to shake all our hands.

"I had no idea the war was this hot over here, among women, among academics, among progressives."

May Thyme Zipporah Siegel rest in peace and may we all be comforted. The death of heroes is always the hardest for me to bear.
Posted by Dusty at 7:50 AM 1 comment: