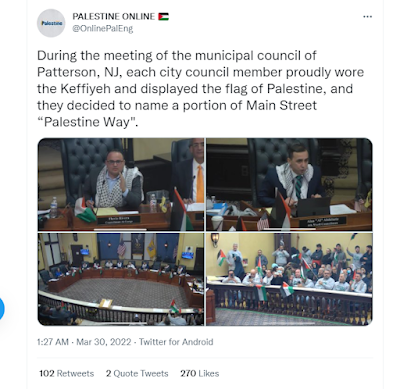 Paterson has so many Palestinian residents that it is often referred to as  "Little Palestine".

Sadly, this is not the first time a street has been renamed following a Palestinian terror attack

The Knesset approved permits for 20,000 workers from the Gaza Strip to work in Israel.

A 40 million shekel investment to modernize Gaza crossings was announced.

“Our government is working very hard to improve the lives of the Palestinians in the West Bank and in Gaza,” Bennett stated. “We are going to be investing almost 40 million shekels in improving the crossings between Israel and the Gaza Strip to allow smooth and dignified movement between Gaza and Israel.”

“While we can’t solve everything, we can improve the lives of people on ground and thanks to your help, this is happening,” he added.

Blinken commended Bennett and the Israeli government for efforts to address challenges facing Palestinians, citing the increase of Israeli water sales to Gaza and legalizing the status of thousands of Palestinians in the West Bank.

11 Israelis have been killed in terror attacks this week.

Where are we after 21 years of BDS?

Well, there's this. According to a Gallup poll released this week as part of its annual World Affairs poll, Israel ranks seventh on list of countries rated favorably by Americans.

After multiple attempts to rid our port cities from the scurge of the Israel-affiliated Zim Shipping line, whats the net result of Block the Boat, and Block the Boat, the sequel?

*  ZIM Integrated Shipping Services Ltd  stock has risen 226.06% over the last 12 months, and the average rating from Wall Street analysts is a Buy.

Maybe that celebration party was a bit premature, eh, Lara?

Maybe its a Pyrrhic victory at best.   Since the Unilever owned business made the decision to stop selling ice cream over the Green line,  seven states have taken action against  the company.  Most recently, Colorado has joined New York, New Jersey, Illinois and Arizona divesting state pension funds from the company. Florida and Texas have also taken action against Ben & Jerry’s.   Other states are likely to take action as well.

Unilever’s stock has plunged in the last six months.  Its been estimated that the boycott  has led to a $26 billion loss.

Unilever- this is your stock on BDS. 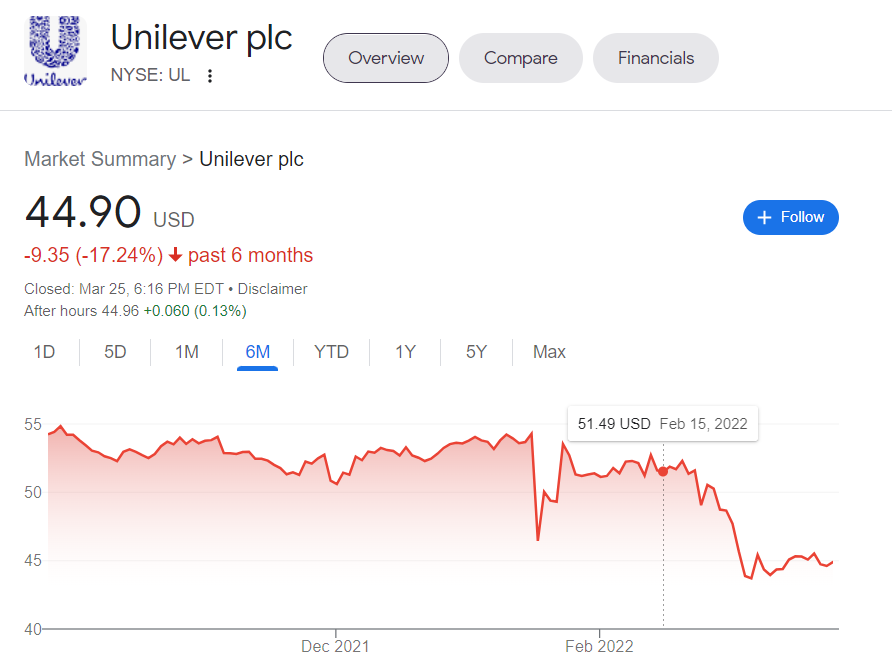 Israel tech continues to thrive. Total funding in 2021 reached a new peak of $27 billion — more than doubling the amount raised in 2020. Israel consistently produces more "unicorns" per capita than any other nation, with 48 last year alone.  Israel's exports reached a record high of $140 billion in 2021, up 18% from last year.

Perhaps the biggest BDS fail are the Abraham accords, and the expansion of Israeli  diplomatic relations across the Middle East and North Africa. The BDS movements goal of isolating Israel has failed.  The expansion of social, political and economic ties across the region has laid the foundation for a real and lasting peace. 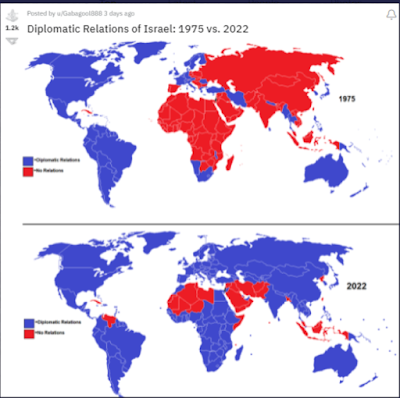 When a second tier liberal arts college removes Sabra hummus from the school cafeteria, or a B list performing artist cancels a trip to Israel, the BDS holes shout their  "victories" from the rooftops.   Its all they've got.    Remember the big picture.

Yesterday, some of the most extreme anti-Israel groups in the Bay Area got together to sponsor a talk by an Israeli member of the Knesset. 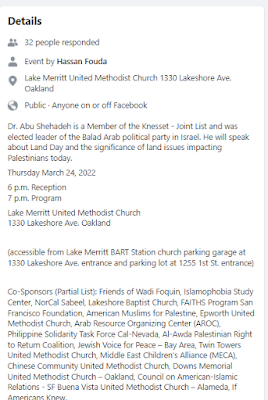 In a gesture of startling hypocrisy, If Americans Knew,  Sabeel, Arab Resource Organizing Center, Jewish Voice for Peace, American Muslims for Palestine, CAIR,  Al Awda and others ignored their own established policies against  "normalization"  and hosted a member of Israel's government.

Oh, but he wasn't a Jew.  That matters, apparently.   These extremists hosted Sami Abu Shehadeh, a member of Israel's Knesset member of the representing the Arab nationalist party,  Balad.  If you ever had a doubt that BDS and the movement to isolate Israel economically, politically and socially was directed solely toward Jews, now you have evidence.

The very presence of of Sami Abu Shehadeh within the Israeli government negates the claims of these groups that assert that Israel is an "apartheid" state. 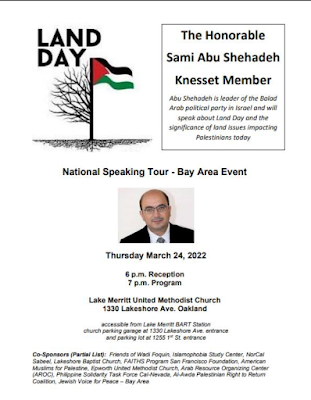 Incidentally, although Jewish Voice for Peace has, on paper at least, denounced white supremacist Alison Weir, they had no trouble promoting and co-sponsoring this event with her and her group "If Americans Knew".  So much for that "formal policy". 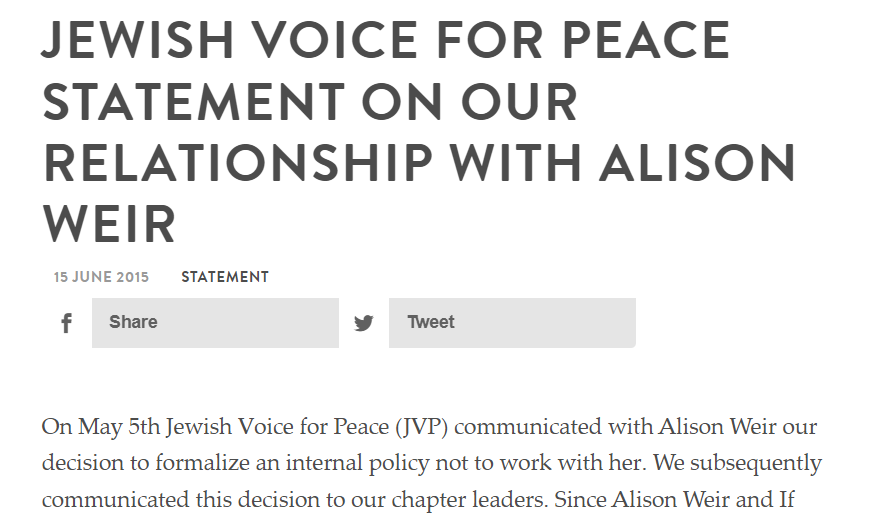 Arabs make up nearly 20% of Israel’s population. They have full citizenship, including the right to vote, and have a major presence in the fields of  medicine, academia and in government.   Whatever these groups original intention was in sponsoring Sami Abu Shejadeh,  it was lost in translation.  The event only served to shine a spotlight on the hypocrisy and the falacies of their own movement.

The bulbous nosed Jewish stereotype has been used since the Middle ages and was a regular feature of Nazi-era propaganda.  Now we see it at one of the top public universities in America. 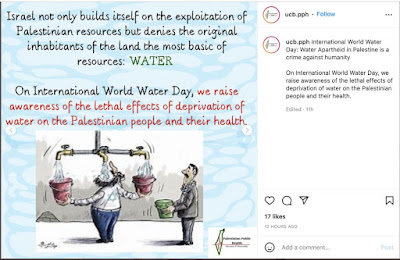 UC Berkeley has had more of its share of antisemitic activities.  There have been assaults on Jewish students, swastikas carved into dorm doors and bathroom stalls, and exhibits glorifying the murderers of Jews.    This has a cumulative effect on the psyches of Jewish students, Israeli students, and pro-Israel students and has contributed to creating an unsafe space on campus.

Palestinians celebrate the deaths of Innocents in Beersheba

Today, at least four Israelis were killed in a Beersheba terror attack. Mohammad Ghaleb Abu al-Qi’an, a 34 year old former terror convict from the Negev town of  Hura stabbed and ran over multiple Israelis before he was finally neutralized.  Abu al-Qi'an was a former high school teacher previously jailed for supporting and promoting ISIS at the school.

Palestinian media was filled with praise for the attacker.  Hamas spokesperson Abd al-Latif al-Qanou on official Hamas radio declared “We salute the executor of the heroic operation in occupied Beersheba

“The occupation’s crimes shall be met with heroic operations: stabbings, ramming and shooting,”  al-Qanou added 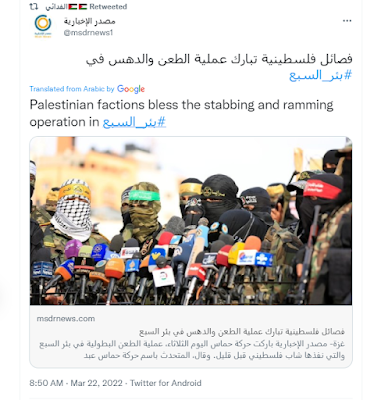 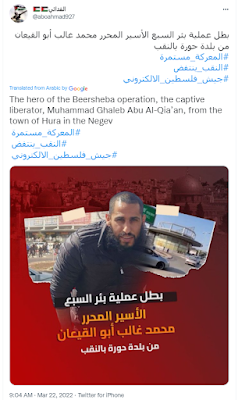 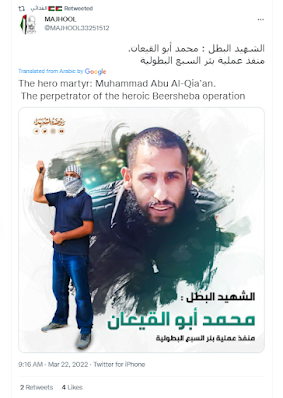 In Gaza, sweets were passed out in the streets to celebrate the murders. 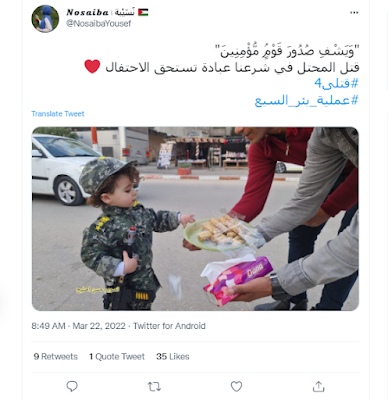 Gaza: Land of 1,230 Mosques. Its people are begining to question why.

Gaza, an area 25 miles long and 8 miles wide has 1,230 mosques, many ornate and extravagant.

The people of Gaza are begining to ask why.

Imam al-Shafei Mosque in the al-Zaitoun neighborhood of Gaza was built at a cost of $3.5 million.


The Al-Khalidi and Salim Abu Muslim mosques in Gaza were built at a cost over  $1 million each.  More lavish mosques will be opening soon.

In improverished Gaza, citizens are begining to question the wisdom of such lavish expenses.
From Al-Monitor:

Mohammad al-Khalidi, a citizen from Gaza, poured out his resentment of such luxury mosques. “The Ministry of Endowments claims that the donors funding the construction of the mosques want to spend this much money on them. But why would it [the ministry] not inform the donors that there are other fields in Gaza where the donations could be more useful? Mosques can be built at a reasonable cost and the remainder of the donations could be used to build hospitals, schools or residences, for example.

Al Khalidi questioned these priorities:
“The opening of the Khalil al-Wazir Mosque in the coming months will stir an uproar among Gazans due to the large number of mosques already present in Gaza, in the absence of development projects, hospitals and sewage networks. For example, in the Beit Lahia area in northern Gaza, the Salim Abu Muslim Mosque was built at a cost of $1 million, while a nonregulated landfill in the area is endangering the health of the locals and the environment.”

The construction of these lavish mosques in Gaza is yet another indication of how out of touch the  Hamas leadership is to the needs of its people and how misplaced its priorities have been.

The Palestinian Authority Health Ministry identified one of the deceased as 17-year-old Nader Rayan, who will go down forever in statistics as a "child" killed by Israel. 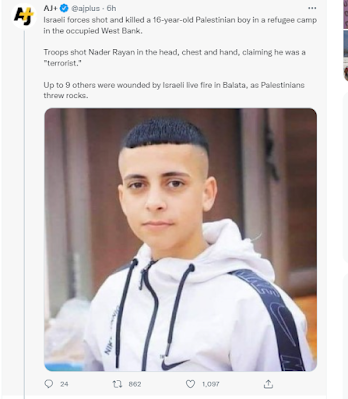 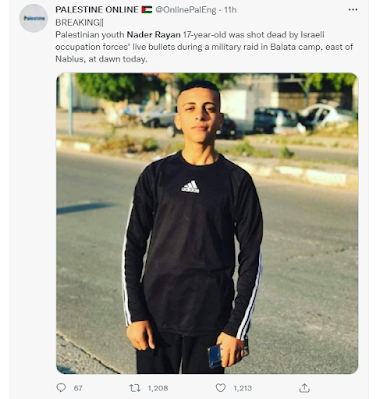 Images that aren't geared to a Western audience portray the  "martyr" Nader Haitham Rayan in a very different light. 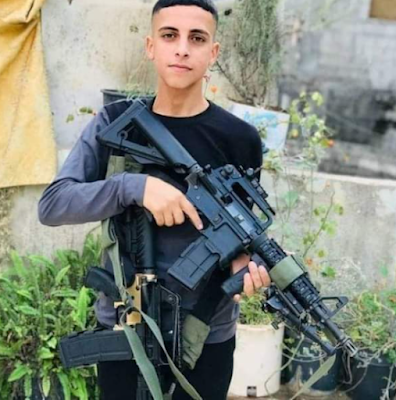 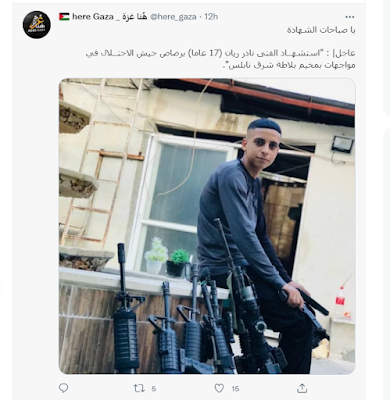 When 17 years olds are given weapons and told to shoot policemen, 17 years olds will die.   Mourn for Nader Haitham Rayan, whose life was cut short by those cynically willing to sacrifice their young.  Mourn for his community, that values his death more than his life.
Posted by Dusty at 11:51 AM No comments:

In a stunning rebuke to Amnestry International recent slander, the Democracy Index from the Economist Intelligence Unit has ranked Israel in 23rd place in the out of 167.    The index ranks Israel as the most democratic country in the Middle East, placing it ahead of even the United States.  Israel's overall  score has been improving steadily over the years.

Israel scored 7.97 points out of a maximum of ten, just behind France (7.99 points) and Britain (8.1 points). Nations are rated on a variety of factors, including electoral process and pluralism, civil liberties, functioning of government, political participation and political culture.

The Judicial Selection Committee recently appointed four new justices to Israel's Supreme Court. The four are Judge Khaled Kabub, Judge Ruth Ronen, Judge Gila Kanfei-Steinitz and Yechiel Kasher, an  attorney in the private sector. Kabub is the first Arab Muslim appointed to the Supreme Court, although there have been Arab Christians on the high court in the past.

Justice Kabub is a graduate of the Tel Aviv‐Berkeley Executive Program which brings Israeli lawyers, judges and policymakers to study at UC Berkeley and complete their LL.M. (masters). The program is coordinated with Tel Aviv University’s Buchmann Faculty of Law. There are two semesters taught in Israel with a third  is taught on the Berkeley campus. 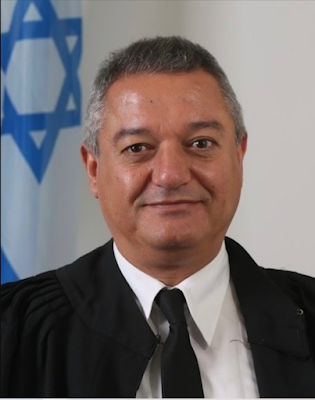 Lets remember this when Berkeley's Bears for Palestine and SJP accuse Israel of Apartheid later this month.
Posted by Dusty at 1:12 PM No comments:


This week is the anniversary of the notorious Coast Road Massacre, in Israel.   Thirty-eight civilians were murdered in the attack. Seventy-one were wounded. Thirteen children were among the dead. 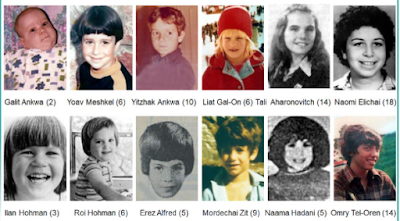 On  March 11, 1978, twelve members of a Palestinian terrorist group led by Dalal Mughrabi landed on a beach near Ma'agan Michael.  They were armed with Kalashnikov rifles, RPG light mortars and explosives. They walked to the nearby highway, where they began a murderous rampage, opening fire on passing vehicles before hijacking a bus.  American photographer Gail Rubin was murdered by the group.

The terrorists continued to fire and throw grenades at passing cars.  Passengers on the bus were shot and bodies were tossed off the bus. A second bus was commandeered, and the remaining passengers were forced on it.
In spite of the brutality of the murder, or perhaps, because of it, Dalal Mugrhabi has become a cultural icon to the Palestinian people.   PA officials glorified Mugrhabi by naming a sporting event for after her nd encouraged the girls taking part in the event to "continue on the path [of martyrdom]."  The teenagers also wore shirts sporting Mugrhabi's face on it.

In 2016,  a basketball game for high school girls was named after Mughrabi.  There is a square named for her in Ramallah.

This year is no different.   Fourty-four years after the brutal attack on Israeli civilians, Palestinian social media is awash with posts glorifying this child-killer as a holy martyr,  a blessed heroine and as "The bride of Jaffa" 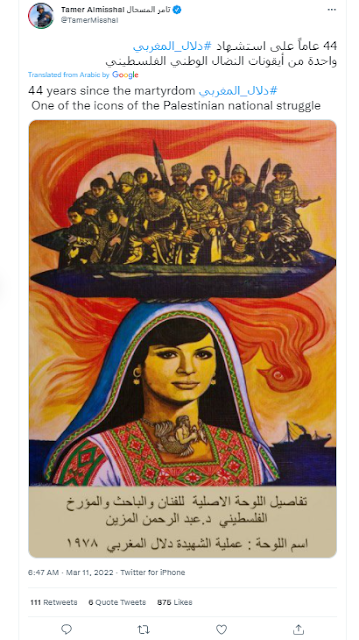 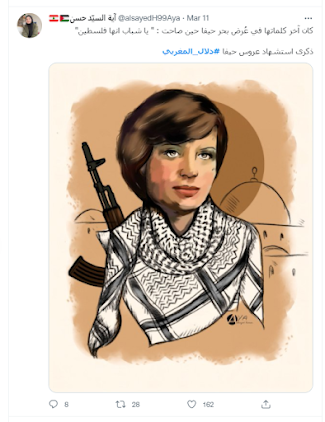 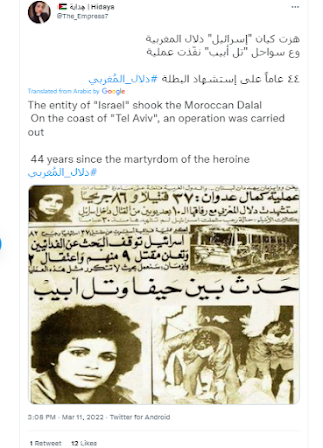 When the Palestinians idolize those with blood on their hands, what chance is there of peace?
Posted by Dusty at 12:44 PM No comments: