A Palestinian in Deutschland

A Palestinian in Deutschland. 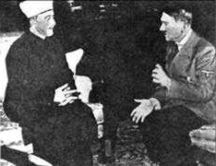 No, not that one.

Mazin Qumsiyeh has been following in the footsteps of his inspiration, the Grand Mufti al Husseni, visiting Germany and plotting against the Jewish, er "Zionist" people.

Mazin: The vision of a Jewish state freed from its original non-Jewish inhabitants was articulated so clearly in those early writings and protocols of the World Zionist Congress. "Der Judenstaat" by Theodor Herzl remains a classic.
Note the use of the word "protocols". Mazin can barely subdue his anti-Semitism. Even in public.

Incidentally, in Herzl's book, incidently he outlines his reasoning for the need to reestablish the historic Jewish State.

"The idea I have developed in this pamphlet is an ancient one: It is the restoration of the Jewish State. . .Palestine is our unforgettable historic homeland. . ."Let me repeat once more my opening words: The Jews who will it shall achieve their State. We shall live at last as free men on our own soil, and in our own homes peacefully die. The world will be liberated by our freedom, enriched by our wealth, magnified by our greatness. And whatever we attempt there for our own benefit will redound mightily and beneficially to the good of all mankind."

Mazin: Here is a modern democratic country where free speech and historical examination is open but it is forbidden and punishable to examine the historical record of the Jewish holocaust. Here where the economy is booming and the country beautiful but the government seems content to obey whatever is dictated by the US State Department (itself obeying orders from Tel Aviv).
Here Mazin engages in two expressions of anti-Semitism- he endorsing Holocaust denial, and spreads the classic Jews, er "zionist" control the world canard.

Mazin: Even here in Germany and despite a guilt complex, facts seem to
trump the Zionist perfidy. It is not even possible anymore to hide the
Nazi-Zionist collaboration of the 1930s and early 1940s let alone to hide
what they did to 12 million Palestinian natives.
Where do we even begin , Mazin? The collaboration of your mentor, the Grand Mufti Haj Amin al-Husseini and Adolf Hitler is well documented.

In 1941, Haj Amin al-Husseini fled to Germany and met with Adolf Hitler, Heinrich Himmler, and other Nazi leaders, in an effort to persuade them to extend the Nazis’ anti-Jewish program to the Arab world. In November 1941, the Mufti met with Hitler, who told him the Jews were his foremost enemy. The Mufti offered Hitler his “thanks for the sympathy which he had always shown for the Arab and especially Palestinian cause, and to which he had given clear expression in his public speeches....The Arabs were Germany's natural friends because they had the same enemies as had Germany, namely....the Jews....”

Equally baffling is Mazins assertion of 12 million Palestinian "natives". According to the Mid east Web, the nature of the data does not permit precise conclusions about the Arab population of Palestine in Ottoman and British times. Nonetheless, "The census of 1893 gives a total of 414,648 Arab Palestinians....Bachi claimed there were 489,000, McCarthy estimated 553,000, and Rupin estimated about 600,000 all for approximately the same year. Moving on to the 1931 census (the last year for which we have census data). The census figures are reported differently in different sources, but the variations are minor. They are in fair agreement with British Mandatory report data listed in the 1937 Report of the Mandatory for 1931. The Report of the mandatory listed about 753,000 Muslims for 1931, while the census figures are quoted as giving 759,000 or 761,000. Where did the figure 12 million "natives" come from, Mazin?

Mazin: It is not possible to hide the fact that Zionists and Jew-haters share the same goal of attributing to Jews what Zionists and their racist apartheid state is doing. Hence Zionists insist on using Jewish symbols on their racist state.
Mazin's irrational hate spewing (Can you just visualize him frothing at the mouth as he pounds this out on this keyboard?) is not just ignorant, it is vile and hateful. Zionism is the belief that the Jewish people have the right to self determination in their ancient homeland.

Mazin Qumsiyeh is also one of the favored hosts of the UC Irvine Olive Tree Initiative when students visit the West Bank . Thanks for this article.

But you're point's still well made. These people are monsters.

kol hakavod on your site!

Go ahead and be a pedant- accuracy is important, as is learning new things. M 16. Got it.