Issam Akel is particularly lucky.  Selling land to a Jew is considered a capital offense, subject to the death penalty.

The US Ambassador has called for Akel's release.

US Ambassador to Israel David Friedman has tweeted

“The Pal Authority has been holding US citizen Isaam Akel in prison for ~2 months,” Friedman tweeted on November 28. “His suspected ‘crime’? Selling land to a Jew. Akel’s incarceration is antithetical to the values of the US & to all who advocate the cause of peaceful coexistence. We demand his immediate release.”
Posted by Dusty at 9:47 PM 1 comment:

Lara Kollab's posts on social media were shocking even by today's standards.   The young medical professional had threatened her Jewish patients, tweeting  “hahha ewww.. ill purposely give all the yahood [Jews] the wrong meds…"

Kollab studied at the Tuoro College of Osteopathic Medicine in New York and worked at the Cleveland Clinic as a resident. Over 80,000 Jews make their home in Cleveland.

After Kollab's tweets were exposed by Canary Mission,  a controversial database which tracks white supremacist, neo-Nazi, anti-Semitic and anti-Israel activists, she deactivated her Twitter, Facebook, and Instagram accounts.

It was too late.   They had all been saved.  Kollab's social media accounts were full of anti-Semitic conspiracy theories, Holocaust denial, and garden variety Jew-hate.

According to a statement from the Cleveland Clinic:

"This individual was employed as a supervised resident at our hospital from July to September 2018.
She is no longer working at Cleveland Clinic. In no way do these beliefs reflect those of our organization. We fully embrace diversity, inclusion and a culture of safety and respect across our entire health system,”

To read more about the frightening racism of Lara Kollab, check out:

Lara Kollab's threatening tweets have gone viral, even making it to the mainstream media, which typically turns a blind eye to anti-Semitism.   Tonight, this appeared on CNN 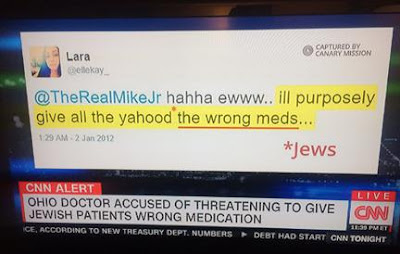 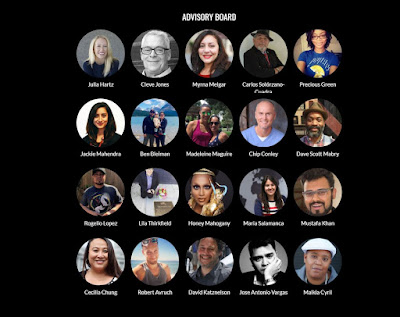 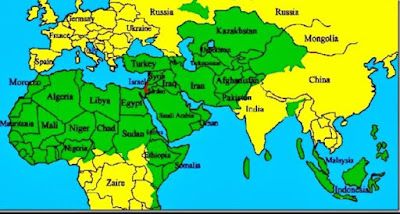 Opened earlier this year by Emanuel Yekutiel, a former intern in the Obama White House, Manny’s is a community gathering place on the corner of 16th and Valencia St in San Francisco’s Mission District. Inspired by DC based Busboys and poets, the space was envisioned as a coffee shop, restaurant and event space

Sam Moss, the executive director of Mission Housing, said he was excited about the project. “One thing about the affordable housing industry that gets lost in translation is how important our ground-floor spaces are, and should be, to serving the general community’s needs,” he said. Moss said he chose Yekutiel’s business out of a half-dozen other interested parties for precisely that reason. “16th and Valencia should be a hub of empowerment,” he said. “I see this as a way to do it.”

The community was clearly engaged by Emanuel Yekutiel’s vision. His kickstarter raised over $75,000.

From the Kickstarter campaign:

Where can you go to meet and engage socially with civic leaders, advocates, public servants, activists, elected officials, unsung heroes, artists, and poets, and writers, the motivated and the marchers?

Where can you go to plug in civically? To get inspired by your community leaders and hear about the issues that motivate them? To get informed on the fights being waged both here and abroad for a more justice and equitable society? Where can you physically go to take that first step and get involved?

With the help of many people, I am building that place - building it at a bustling intersection in San Francisco, one of the most civically engaged cities in the world. The City of the Summer of Love, of the Beat Poets, of Harvey Milk, and of Cesar Chavez and Dolores Huerta.

Manny's will be a civic social gathering space that will combine high-quality coffee, tasty food, great beer and wine, a political bookshop, and a large civic event space.

One half of the space is devoted to social: food, drink, and books. The other half will be devoted to civic: a fully functional event space that will hold nightly programming. The bookshop will be run by the 25 year old veterans of the book industry, Dog Eared Books.

It sounds like a perfect fit in San Francisco, and particularly in the Mission district, yet Manny’s is being targeted by some of the most bizarre protests since Cliff’s Variety in the Castro was tormented for daring to sell Israeli seltzer machines.

Its an astonishing level of hypocritical virtue-signaling, even for San Francisco, a city that elevated it to an art form. 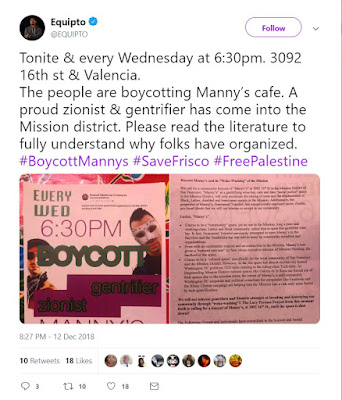 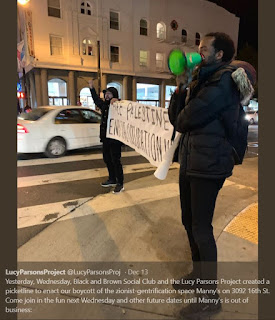 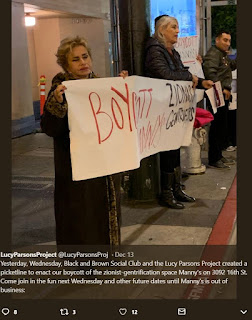 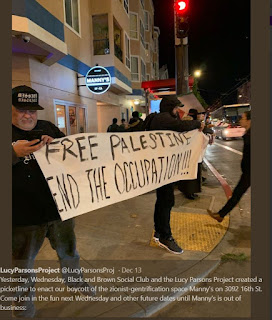 The Lucy Parson's Project calls for running the Jew, er, "Zionist", out of town.   Sounds like they are calling for a pogrom.

World salad from Indybay, the Bay Area's own agitprop site calls Manny's a " gentrifying wine-bar, cafe and fake “social justice” space", claiming the existance of this community space will  "accelerate the raising of rents and the displacement of Black, Latinx, disabled and trans/queer people in the Mission."  And worse of all  (is this the real reason for the protest?), they describe Emmanuel Yekutiel as  having "unequivocally espoused racist, Zionist, pro-Israel ideals". 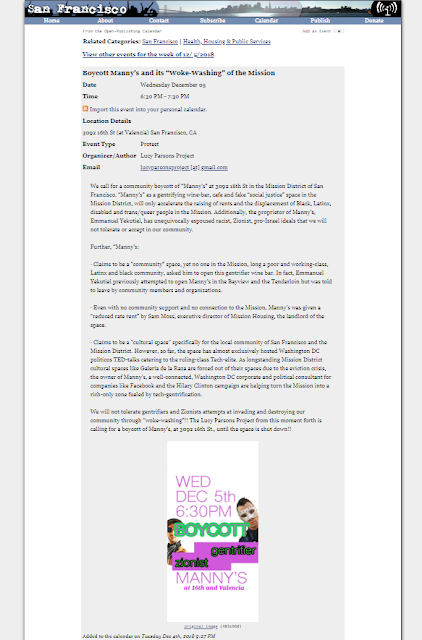 What can you do?   Visit Manny's, on the ground floor of Mission Housing’s Maria Alicia Apartments, 3092 16th St., San Francisco.   Attend some of the sponsored events.  And consider donating here
Posted by Dusty at 7:00 PM 3 comments:

Hamas turned 31 this year, and they threw themselves a party 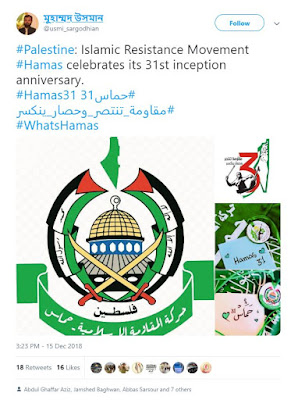 All the cool kids came. 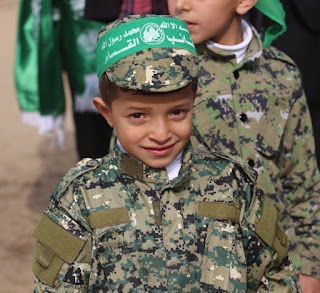 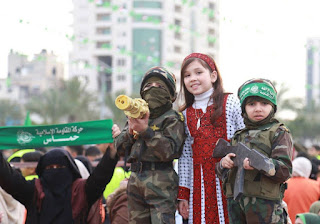 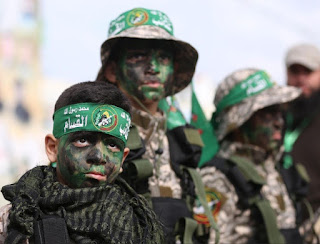 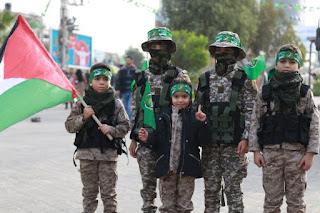 They showed off all their new toys, too. 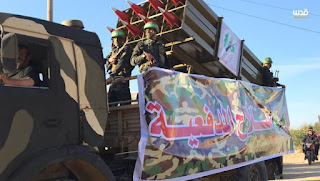 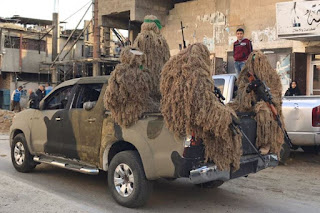 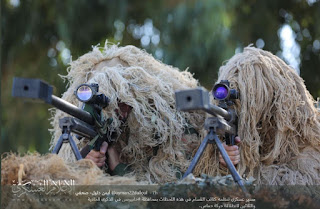 The so called "siege" of Gaza doesn't appear to have effected Hamas's ability to rearm itself.
Posted by Dusty at 9:42 PM No comments:

A man holding a machete, with his face covered by a keffiyeh posed in front of the North Hollywood Chabad Friday afternoon, and snapped a selfie of himself 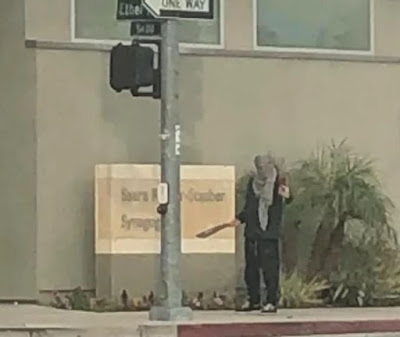 The community was already on edge after last months attack on Orthodox women walking to services.

Rabbi Nachman Abend reported the incident to the police,  “Whenever these things happen it’s a wake up call for everybody and it puts everybody on edge to a certain extent. But we don’t live in fear and we have to continue moving on.”

This is just one of many recent incidents targetting Jewish community institutions, spurred on by the lack of civility  on both the far right and the far left.

UPDATE:
A suspect has been arrested.  David Brener, 49, was arrested at 11 p.m. Friday by the LAPD's Major Crimes Division.
Posted by Dusty at 9:05 AM 1 comment:

This photo is making the rounds, with the claim that this 4 year old was shot by Israelis on his way to school. 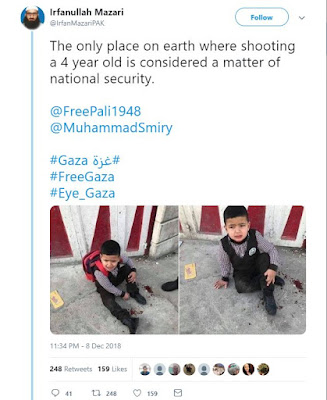 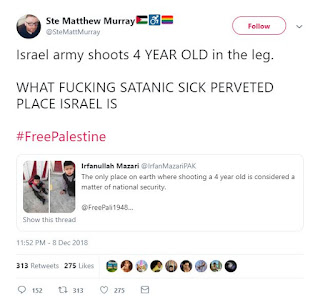 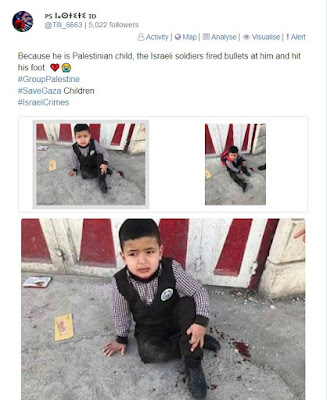 The truth is far different.  This unfortunate child was hit by a car, and his photo was shamelessly exploited by teams of Israel- haters, unburdened by the constraint of truth or fact-checking.  Hundreds of times

Exposed by blogger IsraellyCool:
Latest Libel: The 4-Year-Old Boy Shot By The IDF 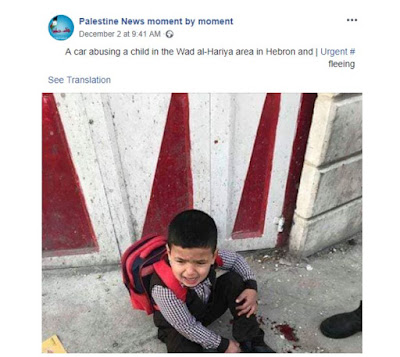 In October, a  desperately-ill six-month-old Palestinian baby received a heart transplant from a Jewish child at Israel’s Sheba Hospital in Ramat Gan. It was the first time the hospital had transplanted a heart to such a young child


Doctors in Ramallah had sent the boy, Musa, to Israel's Sheba’s Safra Children’s Hospital for treatment.

Dr David Mishaly, chief surgeon at Sheba’s paediatric and congenital heart surgery unit, said: “There were several miracles associated with this complicated surgery. There is no such thing in the Palestinian Authority as an organ donor or organ waiting list.
“While organ donor and waiting lists exist in Israel, there was no Israeli baby on the waiting list when Musa was brought to Sheba in very critical condition.
“But by a miracle, Musa was able to receive a new heart from a Jewish child, whose parents had agreed a few hours earlier to the donation.”
Palestinian baby gets heart transplant from Jewish child
Jewish child's heart is donated in effort to save Palestinian baby's life

Sadly, the baby died shortly after the surgery.
Posted by Dusty at 10:07 PM 1 comment:

JP Morgan: “Israel is not about cost; it’s really about the quality”

In an interview with Bloomberg, Yoav Intrator, head of technology operations for JP Morgan in Israel, said the US lender  plans to employ as many as 200 Israeli engineers at its Herzliya office over the next two years.  The financial giant is also setting up a division to engage the start-up nations tech companies that are developing technologies using blockchain and artificial intelligence.
"We analyze our labor and software engineering needs on a regular basis, so it was a very deliberate decision for us to be in Israel,” Larry Feinsmith, JPMorgan’s head of global technology strategy, said in a phone interview. “It’s competitive as the other banks, tech companies and startups are all there.”

"Israel is not about cost; it’s really about the quality,” Intrator said from the bank’s headquarters, which are sandwiched between Microsoft Corp. and a WeWork site. “What can we do in Israel that’s unique and really help the company in its digital strategy in the long term and not just the short term? That’s the primary driver.”

Read about this  BDS fail here
Posted by Dusty at 9:43 PM No comments: