From the Jewish virtual Library

"Early morning on May 31, 2010, IDF naval forces intercepted six ships attempting to break the naval blockade of the Gaza Strip after numerous warnings from Israel and the Israel Navy that were issued prior to the action. The Israel Navy requested the ships to redirect toward Ashdod where they would be able to unload their aid material which would then be transferred over land after undergoing security inspections. During the boarding of the Mavi Marmara, the demonstrators onboard attacked the IDF naval personnel with live fire and light weaponry including knives and clubs. Additionally two of the weapons used were grabbed from an IDF soldier. As a result of the violence, seven soldiers were wounded and there were nine activist casualties."

"One year ago today, Israeli commandos rappelled from helicopters onto the deck of the Mavi Marmara in international waters and murdered nine unarmed activists, who were taking tons of humanitarian aid to the besieged Palestinians of Gaza. Of the nine deceased, six – including Turkish-American Furkan Dogan – were killed “execution style” by being shot at “point blank range,” according to a September 2010 report by the United Nations Human Rights Council." 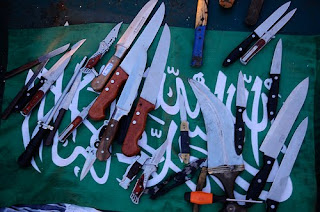 Ibrahim Bilgen, 61, electronics engineer from Siirt, originally from Mosul, Iraq. A relative of his noted that he wanted to die as a shaheed. He joined the flotilla as an IHH volunteer.

Ali Haydar Bengi, 39, owner of a telephone repair store in Diyarbakir He graduated from Al-Azhar University in Cairo (Arabic literature). His wife said in an interview that he had wanted to reach Palestine for many years, and constantly prayed to Allah to grant him martyrdom. His friends said that he wanted to be a shaheed and that he “had an intense desire to die as a shaheed”

Cevdet Kiliçlar, 38, from Kayseri. A recorded statement by Kiliçlar was found aboard the Mavi Marmara: “While our friends were praying at the [Istanbul] Fatih Mosque in memory of the brothers killed in battle in Afghanistan, we boarded this ship [Mavi Marmara] and were therefore unable to take part in the prayer. May the souls [of those killed in Afghanistan] be in paradise. We, too, prayed on our way to our brothers in Gaza, and I pray that Allah will grant us a happy ending, just like those shaheeds”

Çetin Topçuoglu, 54, from Adana. Amateur soccer player and former Taekwondo champion. . Before departing, he left a letter hinting that he expected to die as a shaheed and called on others to aspire to a similar death.

Fahri Yaldiz, 43, fireman from town of Adiyaman . Prior to his departure, he announced that he was going to be a shaheed and said goodbye to his wife and children.

Furkan Dogan, 19, senior high school student in Kayseri. The son of Dr. Ahmet Dogan from the University of Erciyes.

Video of the "activists" attacking the Israeli soldiers


The Turkel commission determined:
*
A vessel that attempts to breach a blockade is subject to international law governing the conduct of hostilities: international humanitarian law, including the rules governing use of force.
*
The Israeli armed forces' interception and capture of the Gaza Flotilla vessels in international waters - seaward of the blockaded area - was in conformity with customary international humanitarian law.
*
The tactics chosen to intercept and capture the Flotilla vessels - including having Shayetet 13 naval commandoes board from Morena speedboats and fast-rope from helicopter onto the roof of the vessels - was consistent with established international naval practice.
*
The participants in the Flotilla were predominantly an international group of civilians whose main goal was to bring publicity to the humanitarian situation in Gaza by attempting to breach the blockade imposed by Israel.
*
On board the Mavi Marmara and the other flotilla vessels was a group of IHH and affiliated activists (the “IHH activists”) that violently opposed the Israeli boarding. The IHH activists who participated in that violence were civilians taking a direct part in hostilities.
*
The force used against civilians on board the flotilla was governed by the principles of "necessity" and use of "proportionate force" associated with human rights based law enforcement norms. However, the IHH activists lost the protection of their civilian status for such time as they directly participated in the hostilities. The use of force against these direct participants in hostilities is governed by the applicable rules of international humanitarian law.
*
The Rules of Engagement for the operation provided an authority to use force that reflected the nature of a law enforcement operation.
*
The IHH activists carried out the violence on board the Mavi Marmara by arming themselves with a wide array of weapons, including iron bars, axes, clubs, slingshots, knives, and metal objects. These were weapons capable of causing death or serious injury. Further, the hostilities were conducted in an organized manner with IHH activists, inter alia, operating in groups when violently assaulting the IDF soldiers.
*
The IHH activists used firearms against the IDF soldiers during the hostilities.
*
The Commission has examined 133 incidents in which force was used. The majority of the uses of force involved warning or deterring fire and less-lethal weapons.
*
Overall, the IDF personnel acted professionally in the face of extensive and unanticipated violence. This included continuing to switch back and forth between less-lethal and lethal weapons in order to address the nature of the violence directed at them.
*
The Commission has concluded that in 127 cases, the use of force appeared to be in conformity with international law.
*
In six cases, the Commission has concluded that it has insufficient information to be able to make a determination.
*
Three out of those six cases involved the use of live fire and three cases involved physical force; two incidents of kicking and one strike with the butt of a gun.
*
In five out of the 127 incidents that appeared to be in conformity with international law, there was insufficient evidence to conclude that the use of force was also in accordance with law enforcement norms. However, in these cases, force appeared to be used against persons taking a direct part in hostilities and, as a consequence, was in conformity with international law.
*
The planning and organization of the IDF mission to enforce the blockade did not include anticipation that there would be a violent opposition to the boarding, which had a direct impact on the operational tactics, Rules of Engagement, and training before the operation. However, the focus of the planning and organization of the operation on a lower level of resistance did not lead to a breach of international law.

Art. 63. Forcible resistance to the legitimate exercise of the right of stoppage, search, and capture, involves in all cases the condemnation of the vessel. The cargo is liable to the same treatment as the cargo of an enemy vessel. Goods belonging to the master or owner of the vessel are treated as enemy goods.