June 16, 2011 9:04 by Simon Plosker
Our Shattered Lens series examined how the wire services misused photo imagery to distort coverage of the Israeli-Palestinian conflict. But what about unattributed photos that are deliberately used to incite against Israel on social media platforms such as Facebook?

Take a look at the photo below that has been posted on a Facebook page Freedom Will Come to Palestine: 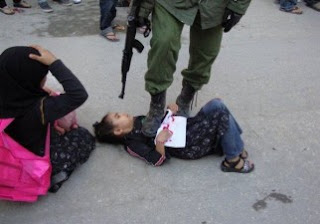 Much like our own Photo That Started It All, the uninformed reader automatically jumps to the obvious conclusion. However, in this case, the “Israeli soldier” is carrying an AK-47 Kalashnikov – the weapon of choice for Arab regimes and terrorist organizations around the world. The IDF standard issue weapon is the US-made M16.

In addition, the uniform is not IDF issue either.

The rest of this Facebook page makes for unpleasant viewing but this particular photo is an example of how false or staged images can be used for incitement.


What is the IDF really like? Ask Col. Richard Kemp. From an article originally posted in the Jerusalem Post, adapted from a speech by the former Commander of British Forces in Afghanistan, who spoke in Tel Aviv this week to a group of young professionals and IDF soldiers.

"It is an honor for me to stand in the same room as those of you in IDF uniforms. You might think that you’re simply defending your country, but in fact you are fighting against violent jihadist terrorism for the whole of the Western world, and you are at the front lines of the battle.

Although not quite a lone voice, mine was certainly a very lonely voice among the many dozens of speeches endorsing the Goldstone Report and repudiating Israel that were made over the two days of the UN Human Rights Council hearing after Operation Cast Lead. This is what I said to the Council: “During its operation in Gaza, the Israeli Defense Forces did more to safeguard the rights of civilians in a combat zone than any other army in the history of warfare.”

What was behind my comments? Apart from basic decency and humanitarian considerations, the commanders of the IDF knew, as do British, American and other NATO commanders, how vital to a counterinsurgency conflict is winning over the hearts and minds of the people, especially in a conflict where they could be sure that killing innocent civilians is exactly what the enemy would be trying to lure them to do.

Because Hamas (like Hezbollah in Lebanon, like the Taliban in Afghanistan and like al-Qaida and the Shi'a militias in Iraq), use their own people as both tactical and strategic weapons of war.

Hamas used them on the tactical level as human shields, to hide behind, to stand between Israeli forces and their own fighters, sometimes forcing women and children to remain in the positions that they would use to launch attacks from.

Hamas used their people too on the strategic level, luring IDF troops to attack and kill them. People whose deaths would be callously exploited in the media as a means of discrediting the IDF. And this is exactly what insurgents do almost daily too in Afghanistan, seeking to provoke NATO and Afghan forces to kill the local people. In these most difficult circumstances, IDF commanders took unprecedented measures to minimize civilian casualties. When possible, they left at least four hours’ notice to civilians to leave areas designated for attack, an action that handed a distinct advantage to Hamas.

Attack helicopter pilots had total discretion to abort a strike if there was too great a risk of civilian casualties in the area. During the conflict, the IDF allowed huge amounts of humanitarian aid into Gaza, and even unilaterally announced a daily three-hour ceasefire knowing this would give Hamas vital time and space to re-group, re-equip and re-deploy for future attacks. A factor often forgotten, but this of course added to the danger to the IDF’s own troops.

The Israelis dropped a million leaflets warning the population of impending attacks, and phoned tens of thousands of Palestinian households in Gaza urging them in Arabic to leave homes where Hamas might have stashed weapons or be preparing to fight. Similar messages were passed on in Arabic on Israeli radio broadcasts.

But despite Israel’s extraordinary measures, a number of innocent civilians were killed and wounded. This was inevitable. Let us not forget: Hamas was deliberately trying to lure the Israelis to kill their own people.

Many have contradicted my assertion about the IDF.

But no one has been able to tell me which other army in history has ever done more to safeguard the rights of civilians in a combat zone.

In fact, my judgments about the steps taken in that conflict by the IDF to avoid civilian deaths are inadvertently borne out by a study published by the United Nations itself, a study which shows that the ratio of civilian to combatant deaths in Gaza was by far the lowest in any asymmetric conflict in the history of warfare.

The UN estimate that there has been an average three-to one ratio of civilian to combatant deaths in such conflicts worldwide. Three civilians for every combatant killed.

That is the estimated ratio in Afghanistan: three to one.

In Iraq, and in Kosovo, it was worse: the ratio is believed to be four-to-one. Anecdotal evidence suggests the ratios were very much higher in Chechnya and Serbia.

In Gaza, it was less than one-to-one.

This extremely low rate of civilian casualties flatly contradicts many of Goldstone’s original allegations, and the bleating insistence of various human rights groups about Israel’s alleged crimes against humanity.

And last month, even Judge Richard Goldstone changed his mind.

As with Cast Lead, the tragedy of the Gaza Flotilla incident, a year ago, has been widely exploited as part of the conspiracy to delegitimize Israel.

There is every reason to believe that the activists on board the Mavi Marmara set out deliberately to provoke the Israeli boarding party into an attack that would cause bloodshed to be exploited in the world’s media. The Turkish group IHH was prominent among the organizers of the flotilla, and had purchased the Mavi Marmara for that purpose.

As well as being a genuine humanitarian aid group, the IHH is a radical Islamic organization. The IHH is vehemently anti-Israel and anti-America, and has extensive connections with international jihadist groups, including al-Qaida. According to a French investigative magistrate specializing in terrorism, the IHH played an important role in an al-Qaida plan to carry out a mass-casualty attack at the Los Angeles International Airport on the eve of the millennium.

Many who should know better have stridently proclaimed that the Gaza blockade itself is illegal. But does not the government of Israel the right – the duty – to protect its citizens against the re-arming of Hamas and other jihadist groups in Gaza, which continue to attack the civilian population with rockets, and undoubtedly desire to expand their conflict in line with the proclaimed objective of destroying Israel as an entity?

Today, Israel faces a conspiracy of delegitimization, which aims to give validity and justification to attacks on Israel by groups such as Iran’s proxies Hamas and Hezbollah, allowing them to strike at Israel with impunity, and encouraging the view that any retaliatory or defensive measures by Israel are by definition disproportionate and should be criminalized.

The more traction this idea is allowed to gain, the greater the instability between Israel and its neighbors. This lessens the chances of any lasting peace, and consequently increases the blood that will be shed on all sides in the region.

The most powerful weapons in this conspiracy are legal, diplomatic and media. Fundamentally, we are talking about a war of words, words that are given unprecedented potency by the internet, by the globalization of the 21st century.

If this is a war of words, we must also use words to counter attack.

The conspiracy seeks to undermine the right of Israel to exist as an entity. And it is this that we must stand up against. As we would stand up vigorously against any movement that seriously sought to undermine the existence of any legitimate, democratic state.

In this war of words, all that is necessary for this evil conspiracy of delegitimization to triumph is for good men to say nothing. I have enough experience of the IDF to know that the harsh condemnation all too frequently applied to them, usually by those with an anti-Israel agenda, is, more often than not, completely unjustified.

To my personal knowledge, Israel’s armed forces and security services have often proved to be firm friends of Britain and the British people. Two events stand out in my mind.

The first happened when I was sent out to be Commander of British Forces in Afghanistan in 2003. We were confronted with an enemy whose many tactics included suicide bombings. This was the first time British troops had to confront suicide attackers, and we had no policy with which to counter them. I telephoned an Israeli contact of mine, who arranged for a Brigadier-General in the IDF to meet with me in London.

This man (at the time, serving as a full-time commander of an operational unit) took the time to fly to Britain within two days. For four hours, we sat in a lobby in a London hotel. He spoke; I took notes. And it was from that meeting that my policy for countering suicide bombers in Afghanistan was devised – a policy that was subsequently adopted by all British forces, and has saved lives.

The second incident occurred a couple of years later, after the terrorist attacks in London on July 7, 2005. We in the UK were deeply shaken by the attacks, the first suicide bombings Britain had experienced at home. At the time I was working for Cobra, the UK national crisis management committee. Very soon after the terrorists struck, I received a call from my contacts in the Israeli security forces who offered every assistance they could provide. I received few other such calls from our allies around the world.

It was then that we knew who our real friends are."
Posted by Dusty at 9:43 AM