Why Do American Feminists Support the Misogynistic Iranian Regime? 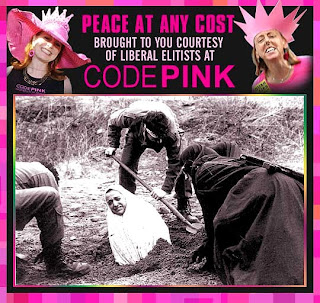 Manda Zand Ervin is the founder and the president of the Alliance of Iranian women. She was the U.S. delegate to the UN Commission on the Status of Women in 2008.

From an article in Pajama's media

"I first met Benjamin in front of the U.S. Congress when she tried vehemently to stop me from entering into the Capitol building. I gave her one of my cards and tried to discuss with her the fact that women in Iran lack the most basic human rights. I told her if she truly cared she could help us Iranian women in the U.S. assist women inside Iran. And instead of being open to listening she gave me nothing more than the self-interested Code Pink prescription for Iranians.

A month later I heard Ms. Benjamin was attending a conference on Iran set up by the most ill-reputed Iranian regime lobby, National Iranian American Council, NIAC."

"... Ms. Benjamin and Code Pink co-founder Jodie Evens received personal invitations by the Iranian president to travel to Iran as his guests. A few months later, while the members of Code Pink were merrily having meetings with the members of the ruling clergies and Revolutionary Guards Corps and sightseeing by private planes and special motorcades in Iran, Fatemeh Haghighatpajou was hanged to death for defending her daughter from a rapist.

In her reports, Ms. Benjamin had nothing but praise for her hosts. Not a single word about the treatment of women or the misogynistic laws by her host government. When she came back, she proudly announced that her travel agency would conduct historical sightseeing tours to Iran.

How disingenuous to pretend they are for the people of Iran while it is just a ploy by the Iranian dictators and the so-called American “progressives” to help extend the dictatorship of one of the most misogynistic regimes in the world!

Why is it that these ideologically motivated people in the West have acquiesced to the Iranian regime’s ploys to disregard all human rights? By coalescing with the Khomeinist dictators, these so-called feminists deny to the people of Iran the very same rights they claim to demand for themselves."
Posted by Dusty at 9:23 AM

this is beyond unreal. what a hypocritical narcissistic troll that benjamin is. her and kate raphael bender must be related somehow.

FYI: Medea Benjamin will be coming to the bay area:

In addition, a special pre-talk reception hosted by Global Exchange and CODEPINK will be held at the Hillside Club from 6:00 – 7:30.