QUIT: The new face of Intolerance

Imagine if the Westboro Baptist Church vandalized an ad for an LGBT film festival? Imagine if the if tea partiers disrupted a LGBT movie? We'd all be appalled and angry at this hateful and intolerant act.

Now imagine if QUIT did.

Its not going to be too hard. Here's a peek at their handiwork from BART: 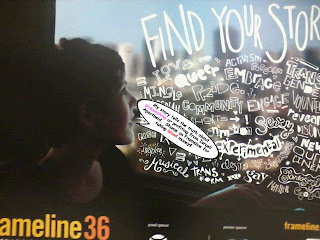 QUIT- Queers for Undermining Israeli terror is not stopping at simply vandalism- they're plotting to interrupt Israeli films at the Frameline film festival in San Francisco.

How is their hatred and their intolerance any different from that of the Westboro baptist church? How is their hatred any different from the forces that left Matthew Shepard tied to a fence post in Laramie? Kate. Jack. Zac. What gives you the right to decide whose voice get heard? What gives you the right to silence the voices of those who disagree with you?

QUIT is planning on interrupting a Frameline showing of the Invisible Men, and silencing the story of a young gay Palestinian man. Why? Simply because the man you gave him a voice was an Israeli- director Yariv Mozer

"In a tumultuous region fraught with religious, cultural and political tribulations, simply being oneself is a luxury that gay Palestinians cannot afford. Threatened with violence and death by the their families, outed gay men such as 32-year-old Louie have fled Palestine for Tel Aviv. But while the Israeli urban center may arguably be the most LGBT friendly city in the Middle East, it is still a space where gay Palestinians have a very tough time living legally and getting by.

His face scarred by his father’s blade, pensive Louie has been hiding in Tel Aviv for almost ten years, eluding police who knock on his door, and living a life with no passport, no bank account, and a cloud of fear following him.Though asylum in a third country is his only legal option, Louie is reluctant to move: the Middle East is, quite simply, his home. While other refugees such as 24-year-old Abdu, who was tortured, has no such qualms about moving to Europe, Louie is torn: he can be in Europe and be free to love, or he can be in the only land he has ever known. He can never have both.

Examining the multiple layers of identity that add up to make a person, award-winning director Yariv Moser’s intimate film sheds light on a world where one cannot be gay in Palestine, or a Palestinian in Israel. In this world, they truly are The Invisible Men."

QUIT's vendetta against the dastardly Israelis who dare accept people regardless of their sexual identity isn't stopping here.

Social media is supposed to be organic and spontaneous- yet QUIT and the hate Israel team continue to manipulate it for their own narrow aims. Local haters have been called to twitter bomb the local LGBT film festival with anti-Israel messages, and to inundate Frameline's management with emails. 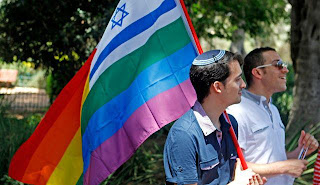 We also know this: Out of Zion comes pride
Posted by Dusty at 4:34 PM

what a bummer i was hoping kate raphael bender from QUIT would have had more things to worry about given her detainment in Bahrain earlier this year. if she's such an international humanitarian and peace activist why isn't she and her underlings in syria?