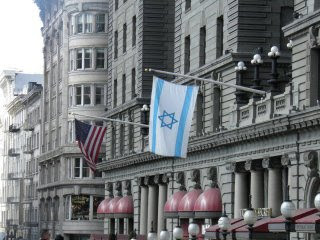 The Westin St. Francis in San Francisco dons the blue and white in celebration of Israel 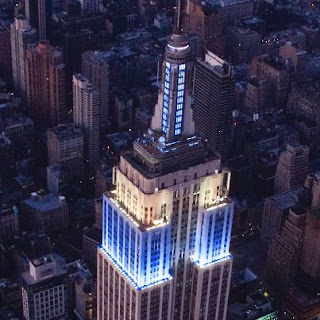 The Empire State Building in New York City dons the blue and white in celebration of Israel.

Yes, New York sure knows how to throw a party. 35,000 participants are expected in the New York City Celebrate Israel parade. Hundreds of thousands will be cheering them on. It’s America’s biggest annual show of support for Israel and its been going on for 48 years.

On June 10, San Francisco has her turn. Our annual Jewish Community Festival, Israel in the Gardens is scheduled, this year featuring yummy food, music, art, and local non-profits. 20,000 people are expected for a day of fun, sun, music and Yiddishekit.

Balkan Beat Box an American-Israeli musical group founded by Tamir Muskat, Ori Kaplan of Firewater and Big Lazy, and now including Tomer Yosef as a core member. Their music is influenced by jamaican dub, and fuses the musical styles of Mediterranean and Balkan traditions with hip hop and dancehall beats.

Efrat Gosh and the Peatot: Leading singer/songwriter with vocal influences from Billie Holiday to Edith Piaf from Herzliya joins Israel in the Gardens with The Peatot based here in the Bay Area. The Peatot pays tribute to Israeli music from the past four decades.

The Voca People Israeli phenomena that landed over 10 million views on YouTube, now on their international tour, following a successful run Off-Broadway. The Voca People are a group of "aliens" who match a Capella singing with the art of beat box creating a near unbelievable range of sounds and instruments.

Oh, yeah. (bored yawn) The usual anti-Israel extremist groups have already announced their day of rage against the day schools, social justice groups, artists and vendors that appear annually at Israel in the Gardens. Their plan- they'll show up at noon, aimlessly circle around calling for intifada, and then slink back home, never once realizing how irrelevant their hate is to those joyously celebrating the democracy, diversity and innovation of the Jewish people.
Posted by Dusty at 7:42 AM