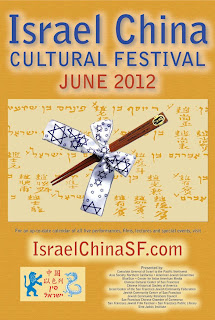 From the j weekly

What do Israel and China have in common? Quite a lot, as the Bay Area is about to discover.

"The two countries have developed strong ties since they launched diplomatic relations exactly 20 years ago. Now, the nations have decided it’s time to celebrate.

The Bay Area will play host to the first Israel China Cultural Festival, a monthlong series of art and photo exhibits, film screenings, lectures, panels, comedy and children’s book events. It culminates with a big banquet in San Francisco’s Chinatown.

The festival is presented by the Consulate General of Israel, the Chinese Culture Center of San Francisco, Asia Society Northern California, the Israel Center and a score of other local Jewish and Asian organizations.

The event celebrates not only the relationship between the Bay Area Jewish and Chinese communities, but longstanding economic and diplomatic connections among Jews, Israel and China.
In a toast before representatives of local Jewish and Chinese-American organizations May 22 at the Israeli Consulate, Israeli Consul General Akiva Tor raised his glass and said, “To the enduring friendship between two ancient peoples.”

Shanghai provided refuge for 25,000 Jews fleeing the Nazis during World War II. But the Jewish connection between China and the Jews runs deeper, and the festival will reflect that."

Thursday, June 14
Children’s story time. “Like You, Like Me,” a bilingual book in Hebrew and Chinese about a young boy in Israel wondering if there is a boy in China like him. Story time will be in English. At S.F. Public Library Chinatown branch, 1135 Powell St., S.F. 2 p.m. Free.

Wednesday, June 27
Film screening and comedy. “Noodle,” about a 37-year-old El Al flight attendant and how she helps an abandoned Chinese boy whose mother has been deported from Israel, 8 p.m. Standup performance by Jeff Applebaum, 10 p.m. At Great Star Theater, 630 Jackson St., S.F. $8-$10.


For more information, visit www.IsraelChinaSF.com
Posted by Dusty at 9:54 AM