Both the EU's working definiton of anti-Semitism, and the US State departments definition echo the same theme "Drawing comparisons of contemporary Israeli policy to that of the Nazis" can be considered anti-Semitism.

From the weblog of Norm Geras:

"these Nazi-analogy critics don't generally apply their favoured analogy elsewhere than in the Israeli case, they don't often use potentially apt comparisons between Israel and other cases that would be less hateful to Jews, and they use the analogy precisely to magnify the parallels and minimize the discrepancies between Israel and Nazism. I submit, therefore, that there are strong grounds for seeing a certain malice in use of the analogy, and as this malice is aimed specifically, aimed by the very particularity of its shape, at Jews, it is hard to know what else to call it but anti-Semitism."

On June 10, 15,000 people joined together for our Jewish community celebration, Israel in the Gardens. Men, women and children waited in long humiliating "checkpoints" to get in to the festivities, and found themselves subject to invasive dehumanizing searches, all in the name of security. No one complained. 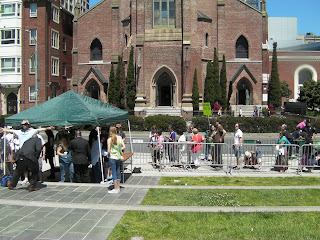 And yes, a few dozen aging activists decided to protest. From their "free speech zone", located appropriately enough in the gutter, once again, as they do every year, the "peace activists" crossed the line into anti-Semitism 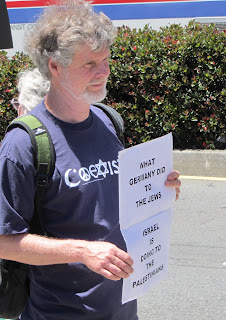 And again, we need to ask the question. Why do these so-called "peace activists" proudly proclaim their Judaism (even when they aren't) while they continue enable, encourage and tolerate anti-Semitism at their events?
Posted by Dusty at 9:10 AM