There’s good reason for the LGBT community to feel pride in Israel:

* The first transgender person to win the Eurovison contest was Israeli Dana International with her song "Diva".
* Openly gay singer Ivri Lidder is one of Israel's most popular entertainers.
* Openly gay movie producer Eytan Fox has created such popular movies Yossi and Jagger, Walk on Water and The Bubble
* Openly gay politicians have served in the Kenneset and on many local councils.
* Tel Aviv was voted Best Gay city in 2011

"Israel's enemies recognized how favorable this record was for Israel, and that it threatened their efforts to demonize the Jewish state, so they shrewdly maneuvered to use it against her, linking promotion of Israel's LGBT record to the conflict in the West Bank and Gaza -- even though there is no connection. The idea that the Israel Ministry of Foreign Affairs' campaign is part of a diabolical scheme to cover up abuses of the "occupation" is completely the invention of anti-Israel queer activists; it is their great lie.

Beginning in Toronto in 2008, and later in San Francisco and New York, LGBT anti-Israel groups formed and sought to make being anti-Israel a queer value..."

How could anti-Israel activists rationalize their , well irrational hatred of Israel, one of the most progressive nations in the world when it comes to LGBT rights?

"The “Pinkwashing” accusation claims that any mention of the yawning chasm between Israel’s positive record on gay rights and the appalling condition of gays elsewhere in the Middle East is not really about concern over gay individuals, but is actually part of a nefarious propaganda plot by Israel supporters who just want to score points and don’t really give a fig about actual gays people or genuine gay issues.

Ignored in this faux controversy over a manufactured term is that regardless of whether or not the gay issue might be manipulated cynically by some of Israel’s defenders (a dubious proposition, at least when applied universally), there is no question regarding the truth of Israel’s superior record on this issue of importance to progressively minded audiences."

Here's where Frameline comes in .

Frameline is our local LGBT film festival- a respected and treasured institution in San Francisco. The list of sponsors reflects the diversity of the Bay area- from corporate sponsors like ATT and HBO- to local institutions such as the Rainbow grocery. The Israeli consulate and the nation of Switzerland are also sponsors. The current controversary stems from 2010 when the Israeli consulate gave money to Frameline to fly in famed Israeli filmmaker and social activist Yair Qedar. Qedar, whose film was being screened as part of the festival is also a founding editor of Pink Time, Israel's first Gay, lesbian and transgender newspaper

Several articles in a variety of fringe blogs have implied that there is something nefarious about this relationship.

"Throughout the years of protests, the festival seemed to be taking a stance of official neutrality. In a June 2010 article in the San Francisco Chronicle, K.C. Price, Executive Director of Frameline, is quoted as saying, "We understand this is a very sensitive subject for both sides. As an arts and cultural organization, we try to stay nonpartisan." In an article from the Bay Area Reporter in June 2011, Price continues: "Frameline is an arts and culture organization, and we don't take political points of view."

Its hard to imagine whats "clandestine" about a relationship that proudly appears on all programming material, as well as on the Frameline Webpage. 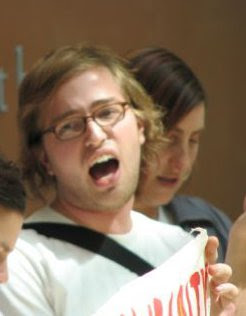 Yet none of these articles mention a rather important fact- the Community Engagement & Communications Coordinator of Frameline for several years was Harris Kornstein - a notorious local anti-Israel activist.

Harris has organized boycotts of local stores that carry Israeli products. He protested an appearance of the Israeli Philharmonic at Davies hall. His organization (the IJAN) sponsored anti-semitic Indian activist Feroze Mithaborwala in a panel discussion in San Francisco. In an act of unbelievable arrogance and intolerance Harris Kornstein participated in the disruption of classes held at the San Francisco Jewish Community center. Harris was arrested for his role in this egregious act.

Its hard to re-construct Harris's relationship with this issue. Did he infiltrate Frameline simply to push his own peculiar brand of bigotry? What role did he play in leaking private information regarding the festival? It also begs the question- If Frameline's Executive Director Kenneth C. Price was less than neutral on this issue- would he have even employed such a vocal anti-Israel bigot as Harris Kornstein?
Posted by Dusty at 5:59 PM

Did you choose that photo of Harris deliberately to make him look like a Neanderthal? It reflects your lack of character- not Harris's.

Harris looks human to me. Methinks, Anonymous, you're just oversensitive to the truth.