Earlier I wrote a bit about the relationship between the Israeli consulate and the Frameline film festival. There is nothing unusual or nefarious about a cultural attache promoting its nation's culture. (I can't help but notice that there arent 24 page memos regarding Switzerland's participation in Frameline. Imagine that.) And a film festival that employs open and active anti-Israel activists can hardly be considered "biased" towards Israel.

But there are other issues. Three blogs reported on this, with varying degrees of inaccuracies. Interestingly enough, they aren't accepting comments that correct what they've written.

"The leaked emails show conversations between Frameline and Jewish Federation staff about trying to get pro-boycott ads taken down from bus shelters."

And yes, the usual team of haters at "Mondofront" also wrote about this (No- I don't link to hate sites.)

These blogs miss a crucial point. Was this a deliberate ommission? We'll never know, because my comments haven't appeared on the websites. These were not paid ads. Bus shelters were vandalized. Paid ads were removed from the bus shelter and "plop art"- propaganda was placed in.

It was vandalism, pure and simple. There was no "censorship". 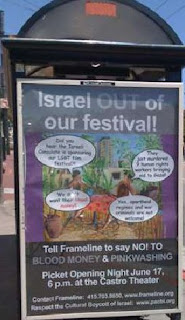 Switzerland is also a sponsor of the Frameline film festival. From the website of the Swiss Consulate:

"The Federal Department of Foreign Affairs (FDFA) has an annual budget of CHF 1.5 million available for the implementation of cultural projects abroad. The budget is administered by the Cultural Foreign Policy Centre (CCC), which functions as a link between the cultural milieu in Switzerland and the Swiss representations around the world."

Switzerlands' commitment to using its Consular services to spread its culture is never once called into question. Once again, Israel is held to different standard than the other nations of the world.

Boycotting Jews. Boycotting the state of the Jewish people. Its just a new look veiling an ancient hate.
Posted by Dusty at 9:30 PM