Under UNRWA’s operational definition, "Palestine refugees are people whose normal place of residence was Palestine between June 1946 and May 1948, who lost both their homes and means of livelihood as a result of the 1948 Arab-Israeli conflict." The Palestinians are the only group of people in the world whose status is defined this way. 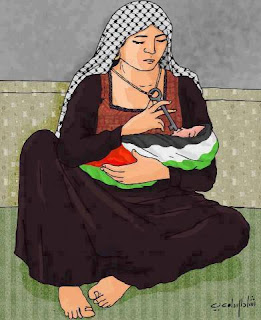 From an article by Elliott Abrams
How many Refugees?

The PCBS reported that there are now 5.1 million Palestinian refugees. Here is what it said about their age:

This is bizarre, and the new statistics are a reminder of the unique definition applied to Palestinian “refugees.” For every other category of refugees in the world, the 1951 UN Convention on the status of refugees clearly applies to the refugee only and not subsequent generations. This is the definition used by the UN High Commissioner for Refugees today. Only in the Palestinian case does a separate organization, the UN Relief and Works Agency, count not only those who actually left their homes but those in succeeding generations, presumably forever, and regardless of whether those progeny were born and are settled elsewhere with full citizenship.

So a young American boy of, say, ten years of age born in Chicago to American parents, but whose grandparents were Palestinians who fled Israel in 1948, is counted by UNRWA as a “Palestinian refugee.”

It is not surprising that the Appropriations Committee of the U.S. Senate on May 31 adopted an amendment defining Palestinian “refugees” the way all other refugees are defined, and rejecting the definition that produces the number 5.1 million today and who knows how many more millions as the years roll by. What’s surprising is that this effort, led by Sen. Mark Kirk of Illinois–who would represent the young boy in my illustration, and his parents–was widely held to be controversial. It is common sense."
Posted by Dusty at 11:29 PM