They call themselves a "peace" group. Bay Area Women in Black just issued an alert calling for a protest of San Francisco's Jewish Community Celebration. And why would any group object to a gathering of community non-profits, crafts and music? 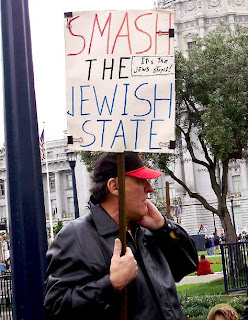 Mr. Binder Clips said it best. Or maybe worse.
"Its the Jews, Stupid"
(photo from our friend, Zombie)

I shouldn't be surprised. After all, this is the group that sponsored Gilad "Burning synagogues can be a rational act" Atzmon for his first Bay area appearance. This is a group that routinely stands by the worse anti-Semites in the area, smiling cheerfully while their allies chant "Itbah Al-yahud" - Slaughter the Jews. This is a group that called the police because they felt "threatened" by a young rabbi and small children singing songs of peace.

Women in Black will be joined by their partners in slime "Jewish voice for Peace". And no doubt their allies from Al Awada and the ISM will show up too.

Its about the Jews, Stupid.

Let there be no doubt in your mind. A protest of day schools, women's groups, summer camps and religious institutions- the wide umbrella of the local Jewish community will be at Yerba Buena Gardens on Sunday June 10- is nothing less than anti-Semitism. Harrassing and intimidating the young families paticipating in joyous communal celebration is anti-Semitism.

Its about the Jews, Stupid.

Dancing. Singing Art. Music. The releasing of doves in a prayer for peace. This is what the Women in Black were protesting.

Email ThisBlogThis!Share to TwitterShare to FacebookShare to Pinterest
Labels: Anti Semitism, Bay Area Women in Black, Israel in the gardens