Life in Gaza. Were you Expecting Hummers and Porsches?

“We used to blame outside foes for the closure, but after five years we feel the government is also to blame”
Wesam Afifa, editor of Al-Resalah, in Gaza

"Hamas has begun to regenerate Gaza, transforming security bases into schools, turning training grounds into public parks, and levelling the Saraya, the Gaza City fortress from which the enclave’s past rulers had governed, instead erecting a commercial complex. A host of new tourist resorts line the beach front. A corniche is being built which, say hopeful officials, will rival Tel Aviv’s...

In the meantime, Hamas leaders seem increasingly content to enjoy the fruits of splendid isolation. The parliamentary car park, full of rickety bangers when Hamas first took office, now gleams with flash new models hauled through the tunnels under the Egyptian border. Two Hummer H3s and a golden Porsche were recently spotted cruising the streets. Ministers and members of parliament seem unbothered by the lack of accountability as well as reports of money-laundering. “We’re hunted and targeted,” explains a self-pitying MP on Hamas’s parliamentary ethics committee, who recently spent $28,000 on a new car with the help of a $12,000 loan from the movement." 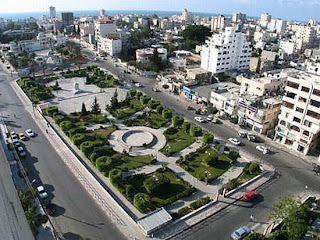 Email ThisBlogThis!Share to TwitterShare to FacebookShare to Pinterest
Labels: Gaza, Gaza by the numbers

yep, sounds just like Treblinka and Auschwitz to me.