“Peace will come when the Arabs will love their children more than they hate us.” 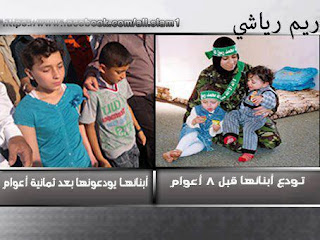 The children of murderer Reem al Riyashi attend her funeral


In an effort to jump-start the stalled peace process, Israel returned the remains of 91 Palestinians. Most of them had been killed while carrying out attacks against Israelis. Hamas militants honored the remains with a 21-gun salute as hundreds of Palestinians waited by the roadside. The remains of Reem Al Riyashi were among those returned. 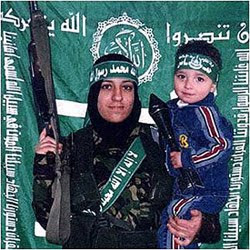 Reem al Riyashi, a Hamas operative from a wealthy family was only 22 when she approached a checkpoint in Jerusalem. Feigning illness to get through the checkpoint, she detonated her explosives, killing 4 Israelis and injured 10. She left behind two children: one 18 months, and one 3 1/2.

In her martyrdom video Reem al-Riyashi explained why she became a suicide bomber: “It was always my wish to turn my body into deadly shrapnel against the Zionists and to knock on the doors of heaven with the skulls of Zionists,”she stated. "How often I dreamed, how often I desired to carry out a Shahada-seeking [suicide] operation inside Israel, and by perseverance, and with Allah's grace, my wish was fulfilled as I wanted."

In a special broadcast of a Hamas TV children's program, Reem's two young children were invited to the TV studio to watch a video re-enactment of their mother's suicide bombing in 2004. [Al-Aqsa TV (Hamas), July 3, 2009]. The glorification of homicide and the incitement of genocidal hatred in young Palestinian children remains deeply disturbing

How can there ever be peace in when violence is glorified and martyrdom cherished? Once again, the words of Golda Meir ring true. “Peace will come when the Arabs will love their children more than they hate us.”
Posted by Dusty at 10:34 PM