Thanks to Challah Hu Akbar, Elder of Ziyon and Daled Amos who re-posted these heart-warming scenes of a kindergarten graduation in Gaza.

From Nelson Mandela:
"There can be no keener revelation of a society's soul than the way in which it treats its children." 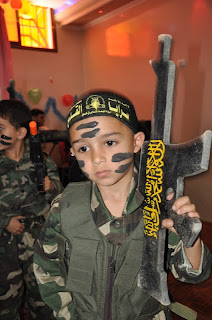 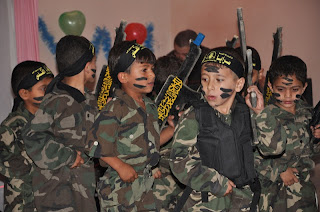 Originally posted at the website of Islamic Jihad "Saraya", the post quotes a teacher "In every year's kindergarten graduation ceremonies we focus on the children to represent the role of struggling and resistance in the way of Allah, in order to establish this path, and grow up to love the resistance, and for it to have a prominent role in their lives to serve the cause of Palestine and Holy Jihad, as well as to make them leaders and fighters to defend the holy soil of Palestine."

One child, Hamza, wearing the uniform of the Al Quds Brigades of Islamic Jihad and carrying a wooden weapon, said "I love the resistance and the martyrs and Palestine, and I want to blow up he most Zionists in a process of martyrdom and kill them."
Posted by Dusty at 9:30 PM