The opponents of Israel in America are minuscule in number, but they make up for it in sheer noise. 40 Cal professors sign a petition- the press release screams “Cal Professors Support Divestment”. 12 rabbis and a handful of Rabbinic students sign a letter- the press release screams “Rabbis support Divestment”. Its all about leverage. Its all about taking a respected community institution- a union, a co-op, a religious denomination- and using it to push a narrowly focused politic agenda. We’ve seen this time and time again.

This time they tried to co-opt a respectable local business. And the business said no.

Clearly the enemies of Israel are extremely well highly financed. In the los Angeles area 23 billboards were rented and scheduled to run for 4 weeks, calling for an end to aid for Israel. Its interesting that they’d spent their money on anti-Israel billboards, rather than trying to ameliorate the tremendous “humanitarian crisis” in Gaza. Being pro-Palestinians isn’t exactly the same as being anti-Israel, and all but the densest hate Israel cru realize the cats out of the bag on the old “starving Palestinian “ meme

The organizers of the billboard campaign began implying that CBS Outdoors endorsed their message. And CBS Outdoors fought back. They were not going to allow their name and their reputation to be sullied in that manner.

From the Standwithus press release

"June 25, 2012 (Los Angeles) - Once again, anti-Israel groups have exposed their lack of credibility, not just on facts about Israel but also on facts about their own alleged successes. This time, fortunately, their distortions were caught by CBS Outdoor, the billboard company.

A coalition of anti-Israel activists that calls for ending U.S. aid to Israel, Coalition to Stop $30 Billion to Israel, has run billboard campaigns in several American cities to spread its message. On June 11 it entered the Los Angeles area, setting up 23 billboards, which were scheduled to run for four weeks, with more billboards to follow. Instead of maintaining a strictly business relationship with CBS Outdoor, it implied through its literature and fundraising appeals that CBS Outdoor actually supported its anti-Israel cause. Its petition of thanks to CBS Outdoor read, in part, "By contracting with the grassroots, nonprofit Coalition to Stop $30 Billion to Israel, this billboard company is demonstrating its support for the basic American tradition of free speech.”

A coalition member’s article (yeah- it was Mondoweiss, again - sorry- we don't link to hate sites) celebrating the Los Angeles campaign was entitled "Billboard campaign to end U.S. aid to Israel hits LA - thanks to CBS."

CBS responded almost immediately. In a curt e-mail note, it informed the coalition that the billboards would be taken down and the money refunded because "your organization has used the 'CBS Outdoor' name without permission" in e-mail messages and petitions. CBS Outdoor removed the billboards after they were up for only one week. "

In the absense of truth and history, the hate Israel cru resort to hoaxes,distortions and downright lies . The press release continues:

"These kinds of factual distortions characterize the anti-Israel campaigners. They misrepresent facts about Israel. For example, the $30 billion in U.S. aid is not a lump sum for one year, but rather is to be spread over the next 10 years. Nor do they let the public know how much U.S. aid to Israel benefits America and the American economy because 75 percent of it must be spent in this country. They also mislead the public about who supports their movement, as they did with CBS Outdoor. Why? Probably because they hope to persuade well-meaning people that their cause is respectable and mainstream, when in fact it is a fringe, extremist movement that seeks to harm the U.S. and one of our most valuable allies, Israel. They can't make that case without distorting the facts," explained Roz Rothstein, CEO of StandWithUs. " 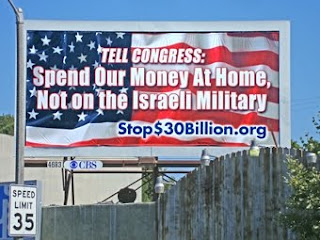 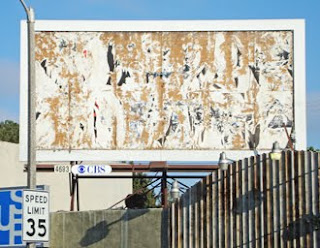 By the way, Jeff, Armen and Sue sent out a plea to punish CBS by spamming them with emails and phone calls:


"Call CBS Corporation, the New York-based parent company of CBS Outdoor, at(212) 975- 4321 right now.
Then tell us you made the call and what if any response you got from CBS.
Email us at info@stop30billion.com.

Thanks for working for justice!
Jeff, Armen and Sue