You can tell a great deal about the health of a society by looking at their heroes, and who they choose to honor.

A street in Ramallah  is named for the notorious  terrorist, Yahya( Yihyeh) Ayyash,  who was the chief bombmaker for Hamas. He was the architect of multiple terror attacks, including a1994 bombing of a Tel Aviv bus, which killed 20 , and injured dozens more.

In Israel, the values are different. There is a street named after Dr. Martin Luther King Jr, noted civil rights leader. 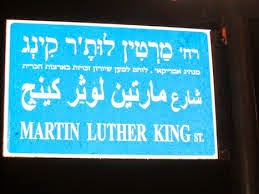 the whole "i am Charlie" really lost it's appeal to me when they had that filthy rat abbas there along with turkey's prime minister another filthy rat and offshoot of erdopig. what a PR farce that was!