Rabbi Sacks: To be free, you have to let go of hate. There is no other way.

Today is  Holocaust Memorial Day, marking  the 70th anniversary of the liberation of Auschwitz, and given the scope of recent events, "never again"  feels very far away.

From Rabbi Sacks: Anti-Semitism is on the march once more in Europe – and no free society is built on hate.  Why we all need Holocaust Memorial Day

Do we need Holocaust Memorial Day? That was the question Tony Blair, the then prime minister, asked leaders of British Jewry in 1999. It had been proposed that we have one for the UK and he wanted our opinion. We explained that we did not need it as Jews. We already have Yom ha-Shoa, our own memorial day, which falls soon after Passover in the Jewish calendar. Every Jew literally – or figuratively – lost family in the Holocaust. For us Yom ha-Shoa is a grief observed.


Jews were hated because they were different. The classic statement is Haman’s remark to king Ahasuerus in the book of Esther that there is a people scattered among the nations “who keep themselves separate; their customs are different from those of all other people” (Esther 3: 8). Anti-Semitism is the paradigm case of dislike of the unlike. For a thousand years Jews were the archetypal Other: non-Christians in Christian Europe, non-Muslims in a Muslim Middle East.

But we are all other, different, unique. That is what makes us human. A society that has no room for difference has no room for humanity. The hate that begins with Jews never ends with Jews. Wherever you find anti-Semitism, there you also find a threat to liberty. No free society was ever built on hate. 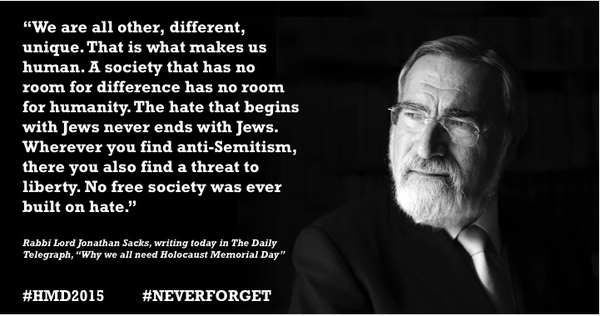