Anti-Israel activists have been attempting to co-opt the racial justice movement for many years.   The latest attempt will take place next month in the African Art and culture Complex, in San Francisco, when Jeff Blankfort, a local purveyor and enabler of Jew hate will display his photographs on  the "Black and Palestinian resistance" movements. 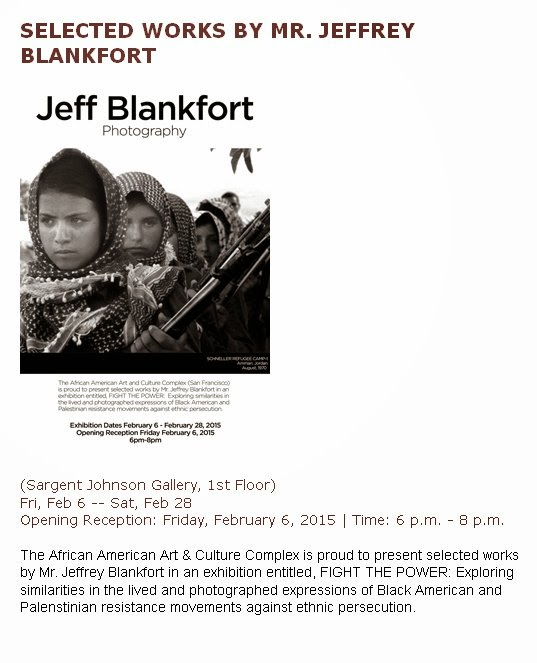 Jeff Blankfort never met an anti-Semite he didn't like, and has done programs with Gilad "burning synagogues is a ration act" Atzmon, and holocaust denier Greta Berlin.

Jeff spoke at Oct 18 2012, at the Berkeley Fellowship of Unitarian Universalists. Using coarse, vitriolic language, Jeff evoked the the themes of classic anti-Semitism, speaking of "Jewish power", and  mockingly comparing those concerned with rising anti-Semitism "as dogs who like to roll in horseshit." Declaring firmly  "Our business here was to stop support of Israel", he made no pretense of objectivity or impartially, until he concluded "The Jewish establishment is the biggest purveyors of untruth and disinformation you can possibly find anywhere in the world".

No doubt, whatever contribution Jeff Blankfort thinks he has to offer to the much needed conversation about racial justice in our society, it will be more about creating heat, rather than light.