Its often been said that at first Palestinians hijacked airplanes, now they  hijack agendas.

Palestinian activists have been trying to co-opt the message of Martin Luther King for years, ignoring both his message of peace and co-existence, and  his support for Israel. Yesterday they brought new meaning to Dr. Kings' words  “There is nothing more dangerous than sincere ignorance and conscientious stupidity”  On the day we commemorate Dr. King's message of tolerance,  a group of Palestinians and their leftist enablers blocked traffic on the San Mateo bridge,  in a very public tantrum. that served only to irritate and alienate their intended audience. 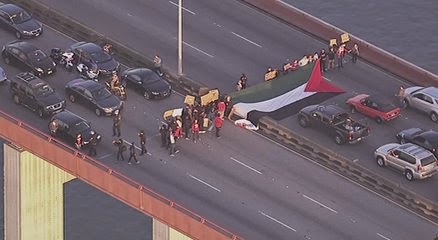 Officers responded to small crashes on both sides of the bridge, but it was unclear how many vehicles were banged up.

One driver ditched a Honda Accord on the span after it was sandwiched between cars in westbound lanes during the protest, the CHP said.

The vehicle had “major front- and rear-end damage and the person ultimately abandoned it,” Hill said.
Officers arrested 68 protesters on suspicion of blocking a roadway and obstructing entry on public land, both misdemeanors. Ten of the protesters were booked into San Mateo County Jail while the others were cited and released, authorities said.

Prosecutors could bring additional charges because of the crashes.

“We have to see what happened,” said San Mateo County District Attorney Steve Wagstaffe. “There were a lot of people very bothered about what happened here.”

commuters are already pissed off over that stunt these leftards pulled at bart last week. this is so typical of the narcissistic "look at me look at me and how hip and counter culture i am" nature of these idiots. they're probably actually stupid enough to think they've helped their cause by screwing up traffic on a busy Bay Area bridge.

The marchers should have been given two choices.