It was a low moment for JVP- a group that habitually disrupts Jewish Community events. The veil has been lifted. Today, activists from the extremist group  interrupted the NYC council as they were discussing a resolution commemorating the 1.1 million people killed in Auschwitz.

In this clip, New York City Councilman David G. Greenfield, the grandson of holocaust survivors, denounces the extremists from Jewish Voice for Peace moments after they interrupted the Council.


"I am still shaken to my core, I'm upset, I'm angry. but I'll tell you honestly I'm actually somewhat pleased at what we saw here today. If you are wondering why I'm saying that its because for the last few weeks we've heard from people who've said "Oh, we don't dislike Jews. We only dislike the state of Israel. We have no problem with you we simply don't want you to go to Israel"  But we know that's not really at the core of what they are saying and today they proved it.

So what you saw here today was naked blind anti-semitism. That's what you saw. That's what you watched and that's what you witnessed. People who are upset for one reason. you want to know why they are angry? you want to know why they are unfurling that flag today? Because Hitler did not finish the job. he only wiped out half of my family. And only by the grace of G-d is the other half, me, the grandchild still alive today. That's why those people are upset. Shame on them.Shame on them for hating Jews. Shame on them for hating people. Shame on them for disrespecting the most diverse democratically elected body in the United States of America. That's why we go to Israel. We go to Israel to make a message that is clear that we will not be cowered by this fear and by this hatred that we have. These are people that would celebrate the death of Jews rather than mourn the deaths of innocents. I am embarrassed at what happened here today but I am pleased that we finally see what this is all about. Good old fashioned anti-Semitism.

Other councillors joined Greenfield in condemning the antisemitic disruption, which included the fringe group “Jewish Voice for Peace” among the participants. “City Council protesters today were so hate-filled and venomous that they strengthened our support for Israel, ONLY democracy in Middle east,” tweeted Councilman Mark D. Levine. Councilman Cory Johnson called the demonstration “incredibly disrespectful and offensive. Simply awful.”

Republican Councilman Eric Ulrich told the meeting that “to be pro Israel you don’t have to be Jewish. Israel is a vibrant democracy and I’m proud to go back to Israel again. I will not be intimidated by the hecklers. I will not sit here and allow people to attack the Jews.”

UPDATE
Widespread disgust over JVP's  behavior has put them on the defensive. 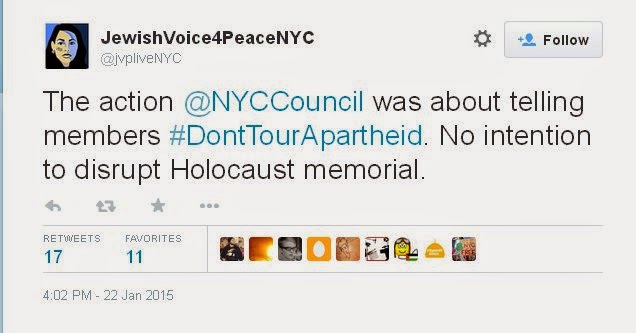 JVP was immediately called out on the lie- they waited in the chambers for precisely an hour and 26 minutes, beginning their interruption at the moment the discussion on the Auschwitz began 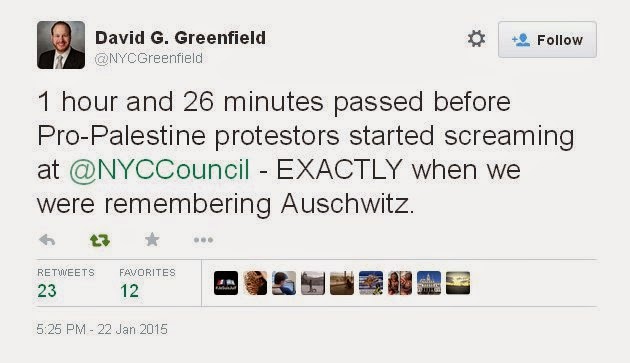 JVP is so disgusting virtually as bad as the terrorists they support.

Ask JVP why there is NO