Another Day of mourning in France.

For the first time since the Nazis occupied France, the Grand Synagogue of Paris did not open for Shabbat services.

The future of the Jewish people in France seems more tenuous than ever.

The hostage-taking began just after noon, when Amedy Coulibaly, 32, a French citizen of Senegalese descent, walked into the store and opened fire, killing 4. Hostages were taken, including woman and children.

Authorities closed shops on Rosiers street in the Marais, the Jewish section of Paris.  The Grand Synagogue was also closed as a precautionary measure.

Across town, the Kouachi brothers suspected of the Charlie Hebdo massacre were holed up in a printing shop. Coulibaly threatened to kill his hostages if French authorities launched an assault on the two brothers.

The Kouachi brothers were found with a  M82 rocket propelled grenade launcher, a two machine guns and automatic handguns.  On one body police found a booby-trapped grenade.

"What happened over the past 48 hours was a shock to the entire French nation," said Simone Rodan-Benazquen, director of American Jewish Committee in Paris.

Rodan-Benzaquen said, "Hatred of Jews never ends with Jews...Radical Islamists have struck violently, from the murders at a Jewish school in Toulouse two years ago, to repeated incidents of violence against Jews and synagogues in Paris, to the vicious rape of a Jewish woman in her own home, and today's assault on a kosher supermarket in the middle of Paris."

Via Mike Harris of SFV4I :

This Sunday afternoon at 2 PM in San Francisco (Civic Center Plaza, in front of City Hall) there will be a rally sponsored by the French Consulate. Given that today's victims were Jews singled out for targeting by the attack on a kosher store, our community should be there. While it is not appropriate to carry Israeli flags (unlike anti-Israel activist groups, we don't hijack other people's events in the service of our agenda), there is something we can do in the memory of the Jewish victims in Paris: on the internet today, many people are posting "Je Suis Juif" (I am a Jew) on their Facebook or Twitter pages. ) 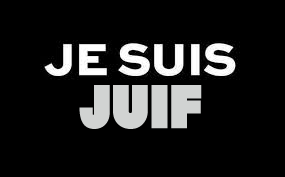