Israel. The only place the Jewish People can be free

The ever repugnant Gilad Atzmon is practically chortling with glee over the attacks on Jews in Israel today, writing  "13 stabbed in terror attack on Tel Aviv bus; Israel is not 'safe" either. I say the moon is our promised planet" 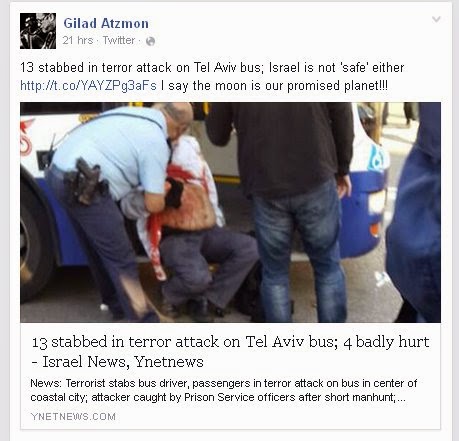 It reminds me of a story

In his book “The Will To Live On,” Herman Wouk tells of an encounter he had with then Prime Minister David ben Gurion. Ben Gurion had come to see the Tel Aviv opening of the Hebrew version of Wouk’s play, “The Caine Mutiny Trial,” and after, invited Wouk to his home in the Negev for lunch the next day. He sent a car for Wouk, an armored vehicle, along with a military escort, as the travel between the cities in those years was fraught with terrorist attacks. After lunch, Wouk relates that upon taking his leave, Ben Gurion said to him: “You must return to live here, this is the only place for a Jew like you, here you will be free.”

Wouk replied with surprise, “With enemy armies ringing you, with their leaders publicly threatening to wipe out the Zionist entity, with your roads impassable after sundown … free?” “I did not say safe,” Ben Gurion answered, “I said free.”
Posted by Dusty at 11:43 PM