New York blogger Pam Geller is bringing her very special world view to the sides of our Muni buses, dragging the ugliness of the Middle East  history, past and present into our daily commute. 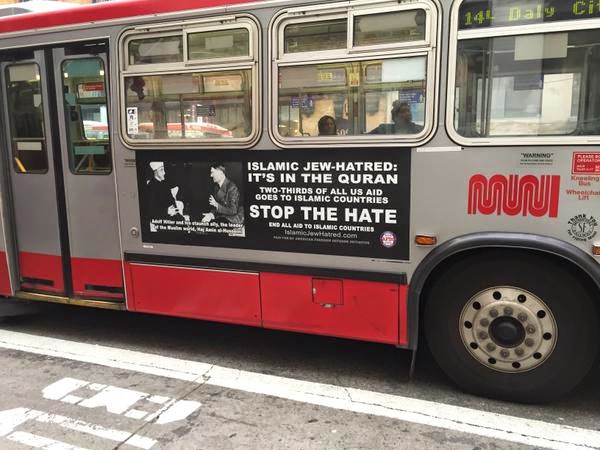 The photo is authentic.

From the Jewish Virtual Library

In November 1941, the Mufti met with Hitler, who told him the Jews were his foremost enemy. The Nazi dictator rebuffed the Mufti's requests for a declaration in support of the Arabs, however, telling him the time was not right. The Mufti offered Hitler his "thanks for the sympathy which he had always shown for the Arab and especially Palestinian cause, and to which he had given clear expression in his public speeches....The Arabs were Germany's natural friends because they had the same enemies as had Germany, namely....the Jews...." Hitler replied:

Germany stood for uncompromising war against the Jews. That naturally included active opposition to the Jewish national home in Palestine....Germany would furnish positive and practical aid to the Arabs involved in the same struggle....Germany's objective [is]...solely the destruction of the Jewish element residing in the Arab sphere....In that hour the Mufti would be the most authoritative spokesman for the Arab world. The Mufti thanked Hitler profusely 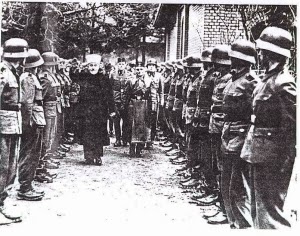 From Eretz Yisroel.org
In 1943 the Mufti travelled several times to Bosnia, where on orders of the SS he recruited the notorious "Hanjar troopers," a special Bosnian Waffen SS company which slaugh-tered 90% of Bosnia’s Jews and burned countless Serbian churches and villages. These Bosnian Muslim recruits rapidly found favor with SS chief Heinrich Himmler, who established a special Mullah Military school in Dresden.

The photo is authentic, but it is presented without context, and serves not to inform or enlighten, but to incite. Thats not the path of peace, in the Bay Area or in the Middle East.

when it comes to islamic terror and Israel i agree with most of what Geller says but i think from the stand point of her getting the message out Geller needs to fine tune things a bit.

Here is a link to a youtube video from which the still is taken from.