"...having Angela Davis provide the keynote address at an event that purports to honor Martin Luther King is a bitter irony, and completely misguided. Such is the case with events at University of North Carolina of Chapel Hill on Monday, January 19, and University of California Santa Cruz on Wednesday, January 28."
Written by Dumisani Washington, a pastor, author, composer and music educator in Northern California on why Angela Davis is an inappropriate choice for a speaker at a Martin Luther King Jr commemorative event.

Originally appearing in the Times of Israel, he writes

In her 2012 article “Dismissal of Palestinians is reminiscent of Jim Crow days,” Ms. Davis stated, “If we have learned the most important lesson promulgated by Dr. Martin Luther King — that justice is always indivisible — it should be clear that a mass movement in solidarity with Palestinian freedom is long overdue.”

This is a classic example of quoting someone completely out of context. Anti-oppression movements are always worthy efforts, but it is crucial to understand who the actual “oppressor” is. Otherwise one will only exacerbate the plight of the people one seeks to liberate.

Israel is a liberal, thriving, multiethnic democracy and has been since its independence in 1948. Arabs, Christians, Muslims, and Jews all serve together in Israel’s parliament (Knesset). An Arab sits on Israel’s supreme court. Jews and non-Jews from dozens of countries live together in Israel (in peace). The Israeli military includes Christians, Muslims, Druze, women, and so forth. All ethnic and gender groups enjoy equal protection and representation under Israeli law. Israel is such a shining example of freedom and prosperity that there is a long waiting list of Palestinians who desperately want Israeli citizenship.

Almost fifty years later, Dr. King’s description of Israel is just as accurate. Surrounded by enemies who seek her destruction on a daily basis (Hamas, Islamic Jihad, Hezbollah, Al Qaeda, and ISIS to name a few), Israel is indeed an “outpost of democracy” and an “oasis of brotherhood” and freedom.


Read it all here 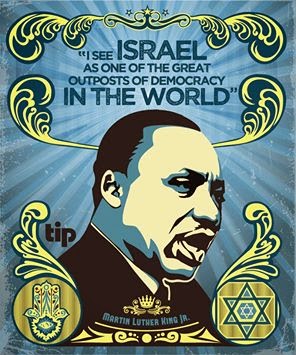 I am old enough to remember Martin Luther King and I remember his murder.
The question that should be asked of Angela Davis is what was she doing during the King years?