The photos on the Christian Peacekeepers Facebook page are heartbreaking, and the story is a real tear jerker, too. They claim the family of  Aamal Hashem Dundes had owned a Hebron home for centuries until the cruel and heartless  Israeli military closed the house and welded the door shut. 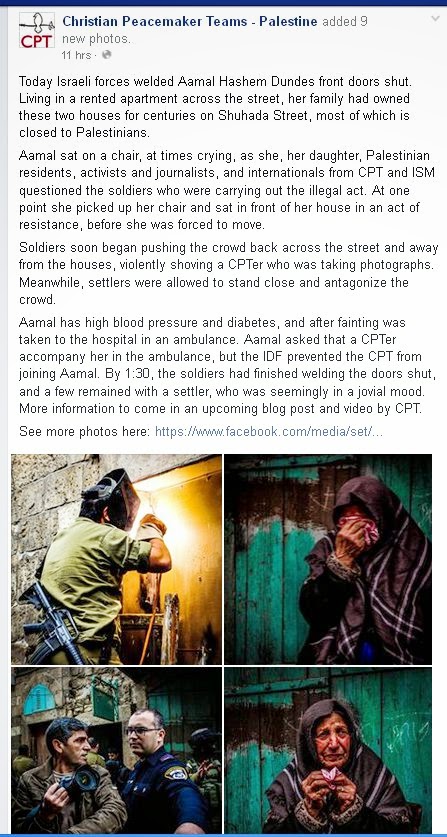 There's a few holes in the story, however.

Two weeks ago, Palestinians hurled two firebombs at Israelis living in nearby Beit Hadassah from within the nearby abandoned building, which had been unoccupied for several years due to a military order, according to the Srugim website.

One of the flaming devices ignited the exterior of a mobile home where Jews were living. The residents of the structure were lucky, however, and there were no injuries in the attack, which caused only minor damage.

However, when an IDF team on Monday came to seal off the entrance of the previously unoccupied building, a group of anti-Israel foreign and Israeli agitators quickly arrived – including the woman and her daughter – and began to harass the welding crew.

“Did you see?! He [a waiting photographer] asked her to cry during the photography, and she cried [on cue] – I can’t believe this,” one shocked Israeli man said, as he himself filmed the scene from behind the press gang, dubbed by some observers as “fauxtography.”

“And here’s her daughter instructing her to ‘cry, cry’ … she’s laughing as she tells her mother to cry,” the Israeli viewer noted with astonishment.

The Oscar for best supporting role in a Pallywood drama goes to....