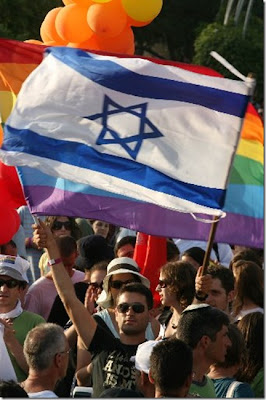 The BDS drums are beating again, this time demanding that the San Francisco LGBT Film Festival refuse the Israeli consulate's sponsorship and funding. Why? Because despite the fact that Israel is the only nation in the Middle East in which it's legal to be gay, these folks have decided that's not nearly as important as their campaign to delegitimize the State of Israel.

They refer to any reference to Israel's excellent record in regard to gay and lesbian rights as 'pinkwashing'. Don't confuse them with facts! Don't think for a moment that the safety, dignity and lives of gay Middle Easterners matter even for a moment when the really important thing is destroying Israel!

This is a perfectly vile attitude, one that not only embraces an unjustifiable venom toward Israel, but privileges that hate above any love for the actual wellbeing of LGBT people. These people suck. So let's let the Film Festival know they're going to lose our presence at the Festival if they stigmatize the representatives of the Israeli government in our community.

Mr. Bluejeans Sr. offered his own proposal for a good resolution to this little brouhaha, which was to request that the representatives of the PLO at the UN in New York put up an equal amount of money for the Film Festival, and get co-billing with the Israeli consulate on the programs. Failing this, call, e-mail, and fax Frameline;

Some Information on LGBT Rights in Israel

-Gays have full rights to serve in the military
-Sodomy laws were struck down in 1988
-Full civil rights for LGBT people established in 1992
-There are partner benefits for all governmental employees, including the national airline, El Al
-Partner adoption rights.
-In 2007 the State agreed to recognize same gender marriages performed abroad, similar to its recognition of other civil marriages from other countries

--Pride parades take place annually in Jerusalem, Tel Aviv, Eilat and Haifa. Attempts by Muslim, Christian and Jewish religious groups to stop the parades, mostly in Jerusalem have consistently been blocked by the Israeli Supreme Court.
-The first transgender person to win the Eurovision contest was Israeli Dana International in 1998 with her song, "Diva". Eurovision is watched by hundreds of millions of people through Europe, Asia and Africa.
-Openly gay singer Ivri Lidder is amongst Israel's most popular entertainers
-Openly gay movie producer Eytan Fox has become one of Israel's most important film exporters to the world, with his movies "Yossi and Jagger", Walk on Water" and "The Bubble".
-Openly gay politicians have served in the Israeli Knneset and on the city councils of Tel Aviv and Jerusalem
Posted by BBJ at 1:14 AM

i'm relatively certain that there is a link from obsessive compulsive anti-Israel disorder to brain damage. it's the only think that makes any sense here.

actually the answer is quite simple why people of all these minority groups who are seen as infidels to islam never the less continue to castigate Israel. it's the "progressive" thing to do. leave them alone and don't confuse them with the facts.

Films based in Jewish Identity offered at Frameline this year