We're Not Kidding About Lacking Partners For Peace 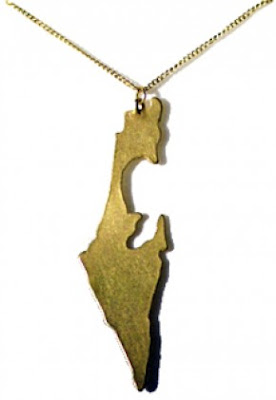 I have been looking for a while for a simple pendant shaped like the State of Israel. It's harder than you might imagine. There are a bazillion chais and chamsas and magens david and the like out there, but relatively few Israel-shaped objects, or stylish Israeli flag jewelry.

I wonder if part of the lack might come from our ambivalence, our never-ending debate, about what the borders of the state really are, or will be, or should be. The most aesthetically attractive candidate I have found on my hunt is the piece above, by Israeli jewelry artist Elanit Leder. It's very pretty, I think. Of course, as observant readers will note, it's missing something--two somethings, in fact--all of the West Bank, and the Gaza Strip.

Look at it. Look, especially, at that vulnerable, breakable-looking little strip of land between the West Bank and the water. Let me think about this. Deep breaths.

The thing is, you see, I'm on record tentatively supporting a two-state solution. I feel that a two-state solution should in an ideal world be entirely unnecessary, since Jordan and Egypt should have provided full citizenship and equality for their nationals displaced from the land they found themselves no longer occupying after '67--but it seems fairly clear that now that they've had a while to think about that, the answer is still "NO," or, as it tends to come out when people are being emphatic in Arabic, "LA LA LA LA LA LA LA LA!" So perhaps a Palestinian state is something we're going to eventually have to have, because this is far from an ideal world.

Elanit Leder, the designer of this piece, has discussed what its borders mean to her. “Practically, it’s Israel,” she said, “because I cannot go to Gaza and Chevron, and I can’t go to Ramallah. This is the safe Israel for me, so to call it. … This is the Israel that we practice.”

Maybe it would be OK for me to wear the Israel that we practice?

But here's the thing--I go looking for the linking piece of this, the Palestine-shaped charm necklaces out there. There are more of them than there are Israeli ones, for whatever reason. And they have an interesting consistency to them, for maps of a still-hypothetical nation: 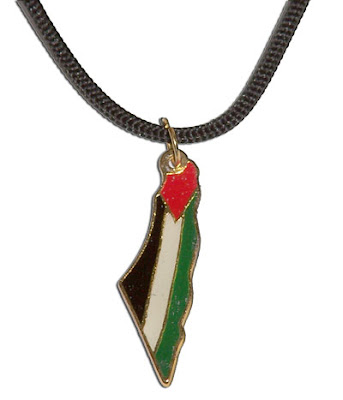 Oh, yes. They're not kidding, here and at our demonstrations here in San Francisco, and abroad, when they chant "From the river to the sea."

At the discussion of Elanit Leder's piece in the Forward above, "Steve" got a little insistent with some people:

What my left wing friends often fail to recognize is that while they may make a distinction between say Chevron and Tel Aviv, the other side (the enemy, thank you) does not. Ask the Palestinian types which part of the country should be for the Jewish State. Let me know what they say.

people who say enemy must believe in war, and war isnt the solution for the state of israel.

"Steve" responds: So.. whats the answer to my question? What exactly is the map for the Jewish State that the, uhm, other side, has in mind?

I wish I had a snappy answer for Steve. But as an honest left-winger, I think we both know what the answer is.