From Slave to IDF Officer: An only in Israel story

"My dream is to contribute as much as I can to this country. There aren't enough words to express my thanks.". 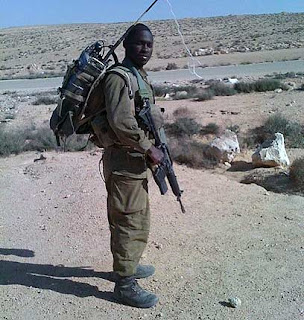 It's a tale worthy of Horatio Alger.

from YNET
Losing his parents at a young age, Avi Be'eri (originally Ibrahim)found him self smuggled to Israel, at the mercy of human traffickers. Aressted in Israel, he found local advocates-Susana and Azion Oshri who welcomed him into their home. Under their sponsorship Avi went back to school. Avi's case was appealed to the Interior Minister. The minister decided to offer the case special consideration and presented him with an Israeli citizenship.

"When he received his identity card he changed his name to Avi – making it official. After completing his studies and receiving his high school diploma, Avi enlisted in the IDF.

On Tuesday he is set to complete his officers' course and will then be promoted to the rank of Second Lieutenant. "I really do feel like someone who is making history," he says with pride. "Who would have believed that I, who arrived in this country with nothing, sat in prison and was nearly deported, would become an IDF officer."

"I feel like every door is open to me and see myself as a Jew in every way. My next challenge is to convert, marry and start a family. I want to go to university and study International Relations and then work in the Foreign Ministry to promote Guinea-Israel relations. My dream is to contribute as much as I can to this country. There aren't enough words to express my thanks."
Posted by Dusty at 9:07 PM

yeah let's hear it for the "apartheid state" of Israel. i'm sure all those black Sudanese refugees in Israel who fled from the killing fields of the Darfur region would agree with that characterization of Israel as well.