A survey, conducted by the Pew Research Center's Global Attitudes Project March 21-April 26, indicates that 68% of Palestinian Muslims say suicide attacks in defense of Islam can often or sometimes be justified, a level of support essentially unchanged from 2007. 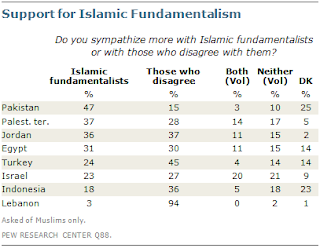 "Ideas about the role of Islam in society vary across Muslim nations. In Pakistan, Jordan and Egypt, solid majorities believe laws should be based strictly on the teachings of the Quran, while this is a minority viewpoint in Turkey, Lebanon, Indonesia and the Palestinian territories. Views about Islamic fundamentalism also vary widely -- in Pakistan for instance, Muslims tend to sympathize with fundamentalists, while Lebanese and Turkish Muslims favor those who disagree with fundamentalists"
Posted by Dusty at 7:00 AM