The San Francisco Jewish Community center on the 3200 block of California Street received a bomb threat and reported it to police at about 8:25 a.m. May 3. The building was sealed off, and several hundred people were evacuated. Motorists were told to avoid the area, and police and bomb sniffing dogs were brought to the scene. No bomb was found after an extensive search, and the center re-opened mid-morning.

The center includes a gym, classrooms, cafe, gift shop and preschool.
The JCC in San Francisco has been targeted with bomb threats in the past. Several years ago, it received a "different" type of attack, when a group attempted to interupt classes held in honor of Israel's birthday 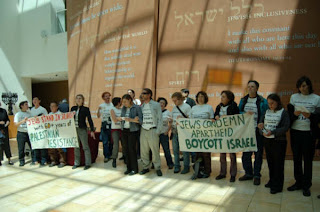 I spy Harris and Sean and Brian and Ari Lev (Amy?) and so many others! Any more photos?