Pity poor Rae Abileah. First her scheduled talk at a Berkeley Jewish Voice for Palestine (JVP) meeting was interrupted by Zionists, and now this. After boasting in a variety of sources about infiltrating AIPAC, the poor girls' shout downs were, well, shouted down. Her attempts to disrupt Netanyahu yet again were met instead by enthusiastic chants of "Bibi" from the thousands attending the AIPAC National policy Conference in Washington this weekend. 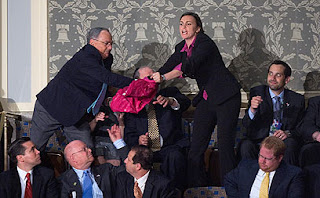 Photo:EPA
Fortunately Rae, known for her random appearances in pink bathrobes, isn't too concerned about matters of personal dignity. Theatrical until the end, she demanded to be taken to the hospital, where her rants continued. 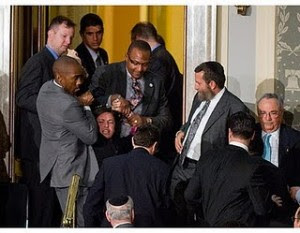 The hospital? Having thousands of people yell "Bibi" at you must be distressing, but does it really require hospitalization?

Apparently the security guards who removed her "hurt" her neck and back. Can you say lawsuit? I think you can. I'm sure this was the plan all along

Now she is claiming they beat her. But didn't she make the same claim in New orleans the first time she interupted Netanyahu?

I find it interesting (and not a little sad) that many of the political activists who insist that their loud, and often disruptive, protests are protected free speech (and therefore inviolable), frequently use their protests to silence the free speech of others.

A perfect example of this double standard is the premeditated outburst by a member of 'Code Pink' during Benjamin Netanyahu's address to the US Congress yesterday.

Of course, there's no rule that says one has to actually listen to the people against whom you you are protesting... but in this case, if Code Pink member Rae Abileah had actually taken a moment to listen to the person she was trying to silence, before screaming "Stop the occupation... ", she would have heard him laying out his vision for doing exactly what she demands.

But when interviewed following her release from police custody, she quickly dispelled any notion about anyone else being entitled to express their ideas, or that she had any interest in engaging the issues or solving problems.

She volunteered the information that she had "visited Gaza a year ago and witnessed the destruction caused by Operation Cast Lead". Afterwards deciding to "devote her life to countering Israel's war crime".

I wonder if she bothered to visit Israel's northern or southern communities to 'witness the destruction' caused by the indiscriminate firing of more than 12,000 rockets by Hezbolla and Hamas to Israeli civilians.

In any case, as if to put to rest any doubt that she might be interested in a free exchange of ideas, or that she supported Netanyahu's right to free speech, she said, ""We are a young generation of Jews who don't intend to sit by in silence and allow prime ministers who commit crimes against humanity speak... As far as we're concerned he can speak at the International Criminal Court in the Hague."

For anyone who posits that Jews, by definition, can't be anti-Semites... this misguided and intolerant young Quisling should put that idea to rest.

With so many of the anti-Israel activists, its more about pathology and psychology than politics. Rae Abileah has always claimed that her Jewish father (with family in Israel) was abusive, and abandoned the family. It seems that she is trying to get back at them with her very public temper tantrums. Perhaps therapy, rather than arrest is the answer for this clearly troubled young woman.

Thank you for condoning and endorsing the assault of a Jewish woman by members of AIPAC in the capitol building. Truly, this is a proud day for Israel.

"Thank you for condoning and endorsing the assault of a Jewish woman by members of AIPAC blah blah blah..."


Objection. Assumes facts not in evidence.

Rae Abileah is an emotionally unstable young woman who has repeatedly engaged in these very public temper tamtrums. When you have unpredictable people interupting Congress, the most important thing to do is remove them as quickly as possible. Could she have been armed? I don't know. The most important thing was to remove her before she harmed others or herself.

Rae Abileah is using this for fundraising; Her appeal:

PS Being rushed to the hospital in an ambulance is not a free service (though we should all have universal healthcare!). Can you make a donation to support my medical and legal bills?